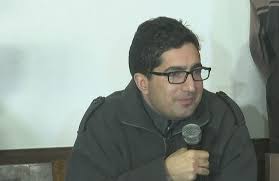 Shah Faesal is the new flavor in the political landscape of Kashmir! A top rated IAS officer who has suddenly had a twinge of conscience that has compelled him to find a new uncharted path. One wishes him well but there is a valid reason to remain skeptical about both his capability as well as his intentions.

He has given interviews and spoken to many journalists after having left the service and it is from his statements that his intent can be deciphered.

Faesal says that his decision is in response to the “Unabated killings in Kashmir and absence of credible political initiative from the Centre.” He wishes to “Re-imagine” the concept of electoral politics which, , in their current form, he feels, are “an obstacle to the resolution (of Kashmir issue).”

Faesal is emphatic about his decision to not join any political party, but his statements indicate a separatist mindset. “The sentiment is that here people don’t relate to the idea of India,” he has said while also terming the Hurriyat as “the custodian of the sentiment of the Kashmir people.” This can be construed to mean that, in his view, the people of Kashmir are looking for “Azaadi” (freedom from India).

To put it simply, Faesal wants India to come forward, hat in hand, and hand over Kashmir to the separatist Hurriyat and to him to do what they will. To achieve his objective he is ready to exert pressure by talking incessantly about the wrongs being committed by security forces (that are fighting to contain terrorism) and play politics with the democratic electoral process in a manner that suits him.

It would be unbecoming to go so far as to say that he is on the payroll of some anti-India forces as is being alluded from some quarters but, at the same time, it would be simplistic to consider his decision to be entirely the product of a emotional upheaval. The fact that he has openly admitted to his admiration for Pakistani Prime Minister Imran Khan and feels “inspired” by him gives a clear idea as to where he will be looking for support.

It is time to make Faesal smell the coffee! The “unabated killings in Kashmir” that he talks about is something that worried every person in India and the world. The most distressed by the violence is the Indian Army, as is apparent from the fervent appeals being made to the Kashmiri youth by the Army Chief downwards to the junior most company commander to shun the path of violence and express their problems in a political forum.  If Faesal wishes to make a difference he should also reach out to the youth and wean them away from the self destructive path of terrorism.

If he wants a “credible political initiative” then he should convince the Hurriyat to come on to the table with an open mind and clean hands. One would like to remind him that the centre has, over the years and with successive governments of both UPA and NDA, given offer for such talks that have been shunned in a most arbitrary, highhanded and literally abusive manner by the Hurriyat. He should read more deeply into the Hurriyat meeting with Deputy Prime Minister Lal Kishen Advani in 2004, the offer for Round Table discussions by Prime Minister Manmohan Singh over two years from 2005 to 2006 and the latest statement by Home Minister Rajnath Singh expressing readiness to talk to those who may not necessarily be like-minded. Apart from waxing eloquent on the subject, Faesal should also specifically state what he wants the government to do beyond what it has done already! He should further give a guarantee that in the eventuality of the government agreeing to his suggestions he will be able to get the Hurriyat and other political entities on board for meaningful talks.

So far as the “Re-imagined electoral politics” are concerned, one will have to wait and see how he develops this model before commenting upon the same.  There are inherent contradictions in the posture that he has adopted.  Presently, it is unclear whether his concept involves standing for elections or not!

An initial reaction to his statements is one of dealing with a person who is either confused or intelligent beyond comprehension. He has nothing new to offer but, on the other hand, he seems to be ready to push a few more pliable youth to their deaths as ignominious terrorists. He is willing to join the bandwagon that believes in creating disruption and divisiveness of a type that the common man is fed up with.

One wonders if Faesal has bitten more than what he can chew! Being devoid of any new ideas he will only encroach into the space of the separatist leaders who are known to guard their position with exemplary determination. They are masters in not sharing the goodies even as they keep jumping ships in accordance with the situational demands. Nobody has been able to encroach in their territory for decades on end.

Nevertheless, in case Faesal is genuine in his concern for the people and aware that their future is secure only so long as they are a part of the democratic Indian Union, one would not hesitate from wishing him success. He has expressed a desire to “bridge the gap to represent the people truthfully,” it remains to be seen as to what he construes to be the truth. If what he has to sell is only “old wine in a new bottle” then he will face ignominy and frustration sooner than he expects, since he will also be seen as yet another self serving politician and a “daily wager” as he so disdainfully refers to the existing leaders of his region.

(Jaibans Singh is a noted analyst, columnist and author)