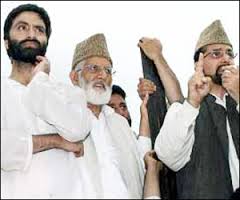 “It is unfortunate that the BJP and its wings are hell bent to divide J&K in the name of religion and geography. I want to convey to them that all five regions of the erstwhile princely state of J&K including Gilgit-Baltistan, Pakistan Administered Kashmir, Jammu, Ladakh and Kashmir are disputed,” Mirwaiz Umar Farooq, chairman of one of the many Hurriyat wings, is reported to have said in one of his weekly addresses after Friday prayers at the Srinagar based Jama Masjid.

In this regard there are few points that the Mirwaiz needs to clarify. When did he last visit Jammu region that would include all areas south of the Pir Panjal mountain range? Does his establishment maintain a political office at Jammu region? Has he ever addressed a congregation in Jammu region? Does he have even a sprinkling of political support in Jammu region? The answers to all of these questions would be a big – NO!! It is, therefore, not understand as to how the Mirwaiz is positioning himself as a leader for the entire state of Jammu and Kashmir.

One would also like to remind the Mirwaiz about h the position that he took during the agitation of 2008, triggered by the rigid posturing of the Hurriyat Conference and some mainstream Kashmir based political parties on the issue of land allotment to the Shri Amarnath Shrine Board. At that stage the Mirwaiz had openly said that on he is not concerned about the Kathua, Samba and Jammu Districts and they can go where they want? So where has this new found affinity come from? Is it not an outright attempt towards spreading misinformation and propaganda?

The reason behind these anxious attempts to expand base and create confusion are not hard to find. They are an offshoot of a constant worry about the political relevance of the separatist movement in Jammu and Kashmir.

In recent times the first sign of a crisis situation for the Hurriyat came when Prime Minister Nawaz Sharif visited India as a guest for the swearing-in ceremony of Prime Minister Narendra Modi and did not include a meeting with the separatists in his agenda. This was a significant departure from tradition. The snub by Nawaz Sharif added to the diminishing confidence of the separatists. The Hurriyat Conference made a valiant attempt to save face. “The PM is coming for a swearing-in ceremony. He is not coming for talks. So, it is totally a different issue,” said Hurriyat Conference spokesman Shahid-ul-Islam. The argument, however, was unconvincing.

To add salt to the wound, Nawaz Sharif did not utter the “K” word in his press conference after his formal meeting with the Indian Prime Minister. Some lost ground was regained when Sartaj Aziz, security advisor to Prime Minister of Pakistan, in a press conference clarified said that the Kashmir issue was raised by Prime Minister Nawaz Sharif during the meeting. This statement made after the delegation returned to Pakistan suggests that it was the outcome of some internal pressure. Kashmir was certainly not central to the talks held by the two leaders in New Delhi.

The Hurriyat then tried to save the situation by inviting the Ambassador of Iran to India, Ghulam Raza Ansari, to address a seminar in Kashmir. The Ambassador caused a huge embarrassment to the conglomerate by not speaking of Kashmir at all. With expectations dashed to the ground, Mirwaiz Umar Farooq, in a most undiplomatic manner ranging on the fringe of nervousness, blatantly urged the Ambassador to use his good offices to build pressure on India and Pakistan to resolve the Kashmir issue for “durable peace in South Asia.” The Ambassador continued to maintain a studied silence.

The direction that the debate on Article 370 is taking has surprised both the separatists and Kashmir based mainstream parties like the National Conference and the Peoples Democratic Party. Earlier any such issue would witness a huge salvo of political rhetoric by the media savvy Kashmir based political leadership of the state that would overwhelm voices coming out from the Jammu and the Ladakh region. This time, however, the voice from the Jammu region advocating debate and discussion on the issue of article 370 was determined and steadfast. This is indicative of a degree of erosion in the political power emanating from the Kashmir valley. The maximum impact of all this would be on the separatists.

The separatist have now launched a well thought out and calibrated political response to counter the set back that they are facing. Their first salvo is, as expected, against Prime Minister Narendra Modi. Through statements by the Hurriyat leaders and conveniently placed articles in some chosen Kashmir based newspapers, an attempt is being made to project Narendra Modi and the government at the centre as one bent upon “polarising Jammu and Kashmir.” To drive home the point a recent news item of the government looking at defining the state territories occupied by Pakistan as Pakistan Occupied Jammu and Kashmir (POJK) is being blatantly exploited by the separatists as an example of this “Polarising of the state.“

The area of Kashmir under forcible occupation of Pakistan has been called Pakistan Occupied Kashmir (POK) ever since the dispute came up, and rightly so. A change from POK to POJK will assist in including the Northern Areas, now called Gilgit-Baltistan, into the definition and give the right perspective to the issue. This reiteration of a fact will definitely not cause any sort of polarisation.

Even a child can understand the motive behind the actions being taken by the separatist parties in Kashmir. They are simply clutching at claws to save themselves for drowning. The separatists and will intensify and make every effort to dir disrupt the turning tide of politics in Jammu and Kashmir. It is now up to the people of the State to look through their machinations and stand for what is reasonable and acceptable to all. In the end moral uprightness must prevail.