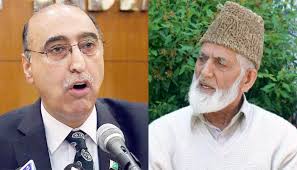 The main bone of contention was Kashmir, as usual. Such is the intelligence network of the anti-India lobby in Pakistan that they were aware of the possibility of Kashmir being sidelined in the talks and were fully prepared with their response. There seems to be a mole in the core group of the Pakistani Prime Minister who leaks out information to them.

Pakistan army heated up the border in Jammu and Kashmir with artillery fire a little before the leaders of the two countries were getting ready to shake hands. This action, by itself, is a clear indication of the stringent opposition to the talks within some quarters in Pakistan.

Foreign sponsored violence directed at the Indian state has not gone down ever since. The region is witnessing a deluge of ceasefire violations, infiltration bids, terrorist activity in the urban areas as well as the hinterland etc.

Terrorists are not ready to curtail their murderous assaults even in the holy month of Ramadan. A few days back, on July, 15, immediately after the talks between the Prime Ministers, a retired officer of Jammu and Kashmir Police was brutally killed by terrorist as in broad daylight (11.30 PM) while on his way to the Masjid to offer prayers.

Lt General DS Hooda, Army Commander of the elite Northern Command, responsible for operations in Jammu and Kashmir has admitted that cease fire violations and terrorist activities have increased over the past few weeks. “We have seen, over the last two weeks or so, that the number of incidents (ceasefire violations) have increased,” Lt General DS Hooda is reported to have told PTI.

As soon as the Pakistani premiere landed back on the soil of his country, he was overwhelmed with bad press and intense pressure. The fact that Kashmir was not mentioned in the joint statement was enough to send the militant lobby of TV anchors and analysts into an apoplectic fit.

First of all, the militant lobby, at the behest of in the Inter Services Intelligence (ISI), roped in the Kashmiri separatists for their pressure tactics. The separatist leader, Syed Ali Shah Geelani and his alter ego Asiya Andrabi, have declared rather grandly, that they will not attend the Eid Milan party at the Pakistan High Commission in New Delhi as, “a symbolic protest against Islamabad’s failure to mention the Kashmir issue in the India-Pakistan joint statement.”

Geelani “protests” against Pakistan only when he is told by his masters there to do so. Since this “protest” is a direct slap on the face of the Prime Minister of Pakistan, it becomes quite apparent that the current Government of Pakistan is not among his list of foreign masters. He is in control of forces which, he feels, are above the Government of Pakistan.

This statement by Syed Geelani is now being played up by the Pakistan media. “India gets to see cracks in the Kashmir-Pakistan relationship, and a weakening of Pakistan’s stand over Kashmir. This is not a signal we want to broadcast,” says an editorial in The Nation, a well known Pakistan daily.

Within Pakistan, Pervez Musharraf, the erstwhile dictator of the country, led the media attack against Prime Minister Sharif. In his eagerness gain brownie points in the eyes of his masters in the Pakistan Army, he tore the honour of his country’s Prime Minister to shreds.  He called his Prime Minister weak and servile and stopped only a whisker short of denouncing him as a traitor. The television commentators and analysts took off from that point to systematically decimate Sharif.

Known to be weak and vacillating under stressful situations, Prime Minister Sharif did not take long to wilt. The rest is history. Pakistan reneged on its promise, appended in the joint statement, to hand over voice samples of the Mumbai terror attack (26/11) mastermind Zakiur Rehman Lakhvi. Lakhvi’s lawyer has categorically said that his client cannot be forced to give his voice samples.

The future plan of action from the Pakistani side will become clear post the Eid Milan party on July, 21, which is being attended by the Hurriyat (Moderate) section.

The second indicator will be the talks between Indian National Security Advisor, Ajit Doval and his Pakistani counterpart, Sartaj Aziz, in September to be held in concert with the joint statement.

One would like to maintain an air of positivity, but a pragmatic assessment would be that this initiative will also be consigned to the archives of failed attempts towards breaking the India-Pakistan impasse.

The situation calls for a reassessment of the need to hold top level talks with Pakistan. All efforts being made by Prime Minister Modi, most sincerely, are coming to naught. Would it not be better to resort to a subdued engagement that gives no space to the disruptive elements to push their agenda?

So far as Jammu and Kashmir is concerned, a statement by Lt General DS Hooda says it all. “The Indian troops,” the General said, “would give a firm response to such transgressions and retaliate effectively as they feel fit, where they deem fit.” Evidently, there is no scope for reduction of security threshold in the state.

Ultimately, it will be the people of Jammu and Kashmir, the government of the state and the security forces deployed in the state who will thwart the evil designs emanating from the neighbouring country. An environment has to be created wherein the perpetrators of violence understand that there is no scope left for their evil machinations.

(Jasbir Sarai is a Chandigarh based activist of Aam Aadmi party)