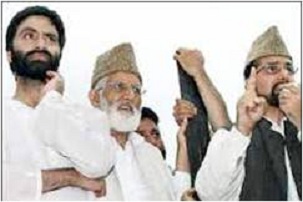 As the date for the visit of Prime Minister Manmohan Singh to Kashmir to launch the train service between Qazigund in Kashmir and Banihal in Jammu approached, the political climate of the valley witnessed immense momentum. The possibility of talks between the separatists and the government became a hot topic all over again. The Prime Minister came, accompanied by the Congress President, Sonia Gandhi; the rail line was successfully launched; an additional financial package was given to the State and the visit culminated. No headway was made so far as the talks were concerned.

“I have always said that those who shun violence, we are ready to talk to them,” the Prime Minsiter said in reply to a media query about the Government’s willingness to talk with separatists. At the same time, the Prime Minister was empathic in condemning the terrorist attack that led to the killing of eight army soldiers in Kashmir a day prior to his visit. “This should not frighten leaders or our opponents to conclude that we will succumb to terrorists efforts to destabilise Jammu and Kashmir, destabilise our economy. I can only say that this is most reprehensible and cowardly act on the part of the terrorists,” he said. The message was loud and clear – no let up in violence, no talks. The separatists were left nurturing their bruised egos by terming the visit as an ‘absolute failure’.

So what is it that makes it so difficult to find common ground to facilitate talks between separatists and the central government? In this particular instance none less than the Pradesh Congress Committee President, Professor Saif-ud-Din Soz, publicly offered to act as a mediator for facilitating talks. “Doors are open for Hurriyat or anybody else for that matter for holding talks (with the PM). Separatists should not wait for invitations time and again,” said Soz. It is common knowledge that the Mirwaiz, Bilal Ahmad Lone and Abdul Gani Bhat were in favour of talks while Shabir Ahmad Shah, Nayeem Khan, Geelani and others opposed the initiative. To this was added the terrible terrorist attack on the security forces and the whole process got derailed. Division among the separatists caused the break down and the hawks prevailed yet again.

Such flip-flop on talks is one of the favourite political pass times in the valley. While not going into the entire history, it would be interesting to see how this matter has been progressing over the last few years.

While playing truant with the quiet diplomacy initiative launched when P Chidambaram was Home Minister the separatists went on to ignore the interlocutors appointed by the government. This rigid stand did not deter them from going to Pakistan in December 2012. They coined this plan with a notion of a rousing welcome and a fruitful outcome, politically and financially, at Islamabad followed by Indian diplomats standing on the tarmac in New Delhi for talks in view of their new found international significance. The entire game prompted Chief Minister Omar Abdullah to state “The same people are averse to boarding a plane and coming to Delhi and talking to leadership here. They will only really meaningfully achieve something if they talk to both the sides. Otherwise it is not going to work.”

The visit to Pakistan was an exercise in futility. A predictable outcome since Pakistan was, at that stage, in the throes of a political churning with general elections around the corner. The separatists were wined and dined with aplomb and sent back with an express “advice” from the Pakistan Army to desist from starting direct negotiations with the Indian government for at least another year. In Delhi, a stony silence greeted them. The writing on the wall was very clear – separatists had lost their relevance so far as the future of Kashmir was concerned, at least for the time being.

With a caveat from their political masters to avoid direct talks with the Indian government, the separatists came up with the suggestion of a dialogue between India and Pakistan which, with their propensity to use grand words, they termed as a ‘summit’ meeting to be held in Srinagar and Muzaffarabad. This happened a little before the visit of the Prime Minsiter to Kashmir. One really wishes that they had consulted Nawaz Sharif before coming up with this hare brained idea. Even a novice can now understand that Nawaz has many other things to discuss with the Indian Prime Minister rather than racking up the outdated issue of Kashmir; it will elicit only a passing reference, if at all.

Political relevance of the separatists hinges on their being recognised as a force in the affairs of Kashmir. This does not seem to be happening. Now the only option left for them is to cause social disruption in the valley to garner some importance all over again. This also does not seem to be happening. Desperate attempts post the execution of Afsal Guru and the recent unfortunate death of two Kashmir youth in North Kashmir have come to naught. The people have clearly shown an aversion for politics of disruption.

The only recourse left for this dormant political force is to become a part, however insignificant, of a dialogue process. At best they can get some concessions to save their political careers. The bottom line is that talks with the centre are in the interest of the separatists rather than the other way round. By taking an uncooperative stance they are only proving that it is they who are not “serious” about a dialogue, something that they blame the centre for all the time. It would serve them well to take on the open offer of talks extended by the Prime Minister; sit on the table, get what they can and move on. If they do not change they will soon go into political oblivion. The window is open only till the next elections in Jammu and Kashmir.