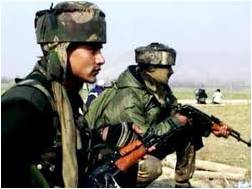 The political crisis that has enveloped Jammu and Kashmir (J&K), could not have come at a more inopportune time. Even as abuses, flying fans and murder charges dominate the political landscape of the Valley; the security forces are involved in a grim battle to counter yet another resolute attempt by Pakistan to up the ante of terrorism in Kashmir. In the melee of barbs and counter barbs, the killing of one Abdul Rehman, a Lashkar-e-Toiba (LeT) terrorist of Pakistani origin in District Pulwama of the Kashmir Valley on October, 03, has been sidelined. Abdul Rehman was working towards reactivating militancy in Kashmir at the behest of his masters across the border.

This is but one small incident amongst many which point towards Pakistan’s grand design to increase infiltration and escalate violence in J&K, especially the Kashmir Valley. A well planned infiltration bid was detected only a few days back on September, 30 at the Shamsbari forests of Kupwara in North Kashmir. This was an extension of a previous bid made by terrorists at the Awathkul forest area of Kralipora, Kupwara, on September, 26, which led to the martyrdom of one young Army officer, Lieutenant Sushil Khajuria, an Army soldier and two JK Police personnel. Operations were resumed on September, 30, when it became evident that the group was larger than appreciated earlier, and as a result, more terrorists fell into the dragnet. A total of six terrorists were eliminated by the security forces over six long arduous days and considerable loss of valuable life.

In an earlier encounter on, August, 20, 12 terrorists were killed in North Kashmir. A young Army Officer, Lieutenant Navdeep Singh, lost his life and two army soldiers were injured in the day long gun battle in the Gurez sector of Bandipora district astride the Kishanganga River. This particular incident was the eighth reported attempt toward infiltration in the preceding month.

In yet another very interesting development on September, 30, Army personnel arrested a LeT terrorist, Nasir Ahmed, resident of Karachi, Pakistan. He was presented before the media in Srinagar along with arms and ammunition recovered from his possession. From his statement it emerged that he was a drug addict who had been “sold” by his brother to the LeT. He had been trained in Manshera in Pakistan by personnel of the Pakistani Army and ISI and then moved to Kel Military Garrison in Pakistan Occupied Kashmir (POK) opposite the Macchil sector in Kashmir where the intensive training carried on. Thereafter, seven members of the group were selected for infiltration. A final briefing was given by members of the ISI before the launch. Predictably, the group was intercepted by the Indian Army and Nasir Ahmed surrendered on being surrounded.

The modus operandi narrated by the surrendered foreign terrorist corroborates yet another input regarding protests by residents of Neelum Valley in POK against a perceptible influx of suspicious looking persons in the region. These persons were dressed in traditional Pakistani Shalwar-Kameez; they sported long beards and spoke in Punjabi. The local administration attempted to brush aside the matter by passing off these people as tourists; the locals, however, were not convinced. They were sure that these were trained terrorists gathering in the area for infiltration into J&K. The people were afraid that this sudden increase in infiltration activity would lead to a break in the cease fire that had held since 2003 and invite retaliation from the Indian Army in the form of artillery fire. They were naturally terrified at the prospect of a revisit of the terrible pre-ceasefire days when artillery fire wrought havoc in their lives. So strong was the level of concern that traders resorted to shutdowns, women protested openly and called for help from local NGO’s while hundreds of school children held a protest march.

There are also indications of turmoil amongst the terrorist leadership because of the surrender policy recently declared by the Governments of India and J&K, whereby, misguided Kashmiri youth who are stranded in POK will be facilitated to return to the fold of their families through a laid down procedure. There are reports of Unite Jihad Council chief, Syed Salahuddin, touring various Mohajir (migrant) camps to boost the sagging morale of his disenchanted cadre and extol them to reject the initiative. It is reliably reported that his efforts have had negligible impact and a large number of the persons have applied for surrender.

Pakistan continues to be in a state of denial so far as her involvement with terror is concerned. This denial does not amount to much in the face of the aforementioned irrefutable evidence of its terror activities directed against India, especially J&K. Let alone India, by now, even the US is quite exasperated with the inability of the Pakistani government to deliver on its promise to contain terror activities on its soil. China also is not very happy with the support that is emanating from Pakistan for Muslim insurgents of the Chinese Xingjian Province. Despite this cup full of woes Pakistan is, quite amazingly, increasing attempts towards export of terror infrastructure in J&K.

It is evident that Pakistan has no intention of relenting in its policy of exporting terror to India, regardless of its own tenuous condition. India’s response has to be in concert with this reality. The government and the people of J&K need to shed their political differences for the moment and concentrate on the huge security threat that is looming on the region. The Nation also needs to stand steadfast behind the security forces who are putting relentless pressure to offset this diabolical design of inimical forces. While countering the security challenge it is also important to build a common global platform to counter Pakistan’s recalcitrant behavior.