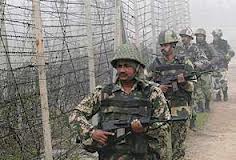 2013 offered a mixed bag for Jammu and Kashmir so far as security is concerned. This was the third consecutive year when the state witnessed a modicum of peace which translated into unhindered social/economic activity. The going was, however, not totally smooth; many issues came up, some due to circumstances and others most cleverly orchestrated by inimical vested interests.

The year started on a sad note with the brutal killing of two brave soldiers while they were patrolling the line of control at Mendhar, Jammu and Kashmir, well within their own territory. Pakistan blatantly denied the incident and continued with its military adventurism through the year. Yet another ambush by Pakistani soldiers on August, 06, 2013 once again in Indian territories led to the brutal killing of six Indian soldiers. Deliberate and constant ceasefire violations by Pakistan were witnessed throughout the year along the line of control and also along the international border. The more than 200 violations constitute the highest in a year since ceasefire was declared in 2003.

Where there are ceasefire violations, infiltration bids cannot be far behind. There were a large number of attempts reported along the line of control; the traditional areas of Karen and Machil in Kupwara, Bandipura, Gurez etc remained active as did areas in Poonch and Rajouri. The biggest attempt took place in Karen in October where massive forces were deployed over almost two weeks to counter the ingress of as many as 30 well armed terrorists. Infiltration attempts along the line of control are usual, what was unusual is the increased activity along the International border in the Jammu region.

Despite sustained efforts the terror mongers across failed to push as many terrorists as they wished to and things have remained in control all through.

Pakistan’s military adventurism caused a serious dent in bilateral relations. The situation mended a bit in the last month of the year with ceasefire violations decreasing. A meeting held between the DGMO’s of the two armies on December, 24 further helped ease matters; while both sides have expressed a resolve to make the ceasefire “sustainable” only time will tell whether Pakistan is ready to walk the talk or not.

Another security issue with an international dimension was repeated incursions by the Chinese along the line of actual control in the Ladakh region. The first major incursion took place in on April, 15, when a contingent of about 30 Chinese soldiers came 10-12 kms inside Indian territories at Burthe in Daulat Beg Oldie, Eastern Ladakh. The situation was diffused at the diplomatic, political and military levels to avoid an adverse impact on relations. The pinpricks, however, continued throughout the year. Incursions in Ladakh gained centre-stage once again in September, when the BJP alleged occupation of 640 sq kms of Indian territories on the line of actual control by the Chinese. The Defence Minister issued a statement in Parliament that helped assuage apprehensions.

In the arena of the all important internal security, the stage for disruption was set by the execution of Afsal Guru. The justified execution became a catalyst to resurrect the dwindling fortunes of the terrorist and separatist forces. Separatists launched a robust calendar of Hartals and Bandhs but after about a month of trying to egg the reluctant population on to the streets they finally gave up. Kudos to the chief minister and the security forces for upsetting these evil designs!

Terrorists operating in Kashmir got frantic directions from their masters across to cash in on the perceived hostile public sentiment to scale up their activity. The terror mongers put in place a strategy of targeting the security forces with the twin objective of sensationalizing their attacks and also inviting a violent retaliation that would cause civilian casualties and damage to property and thus tarnish the good name of the forces. The security forces took personal loss but ensured that public life and property was not jeopardized. Thus the strategy did not reap any results. Terrorists also turned their attention towards soft targets like Sarpanches and Panches, where they did achieve some success but not of the scale that would bring up their relevance.

The most successful terror attack of the year came by in September when a group of three terrorists infiltrated across the border and attacked a police station in Kathua followed by a military establishment in Samba, killing ten army and police personnel. This was a major setback for peace and stability in Jammu and Kashmir.

Another encouraging aspect was that not a single human rights violation was reported against the army all through the year. This situation gave credence to the stated policy of zero tolerance for human rights violations by the security forces. A court martial has been ordered by the army in December to put on trial some soldiers alleged to be involved in a false encounter. This is an indicator that the Army is not ready to protect anybody who commits a crime while on duty.

The coming year will bring with it a new set of challenges for the security forces. Samba has proved that terrorism, though at low ebb, has certainly not lost its sting and can raise its ugly head at the slightest opportunity; hence the need for constant vigil. The recent reduction in ceasefire violations by Pakistan is a welcome development but it may well be a lull before the proverbial storm for which high alert along the line of control and international border is imperative. The year will also witness a drawback of the western forces from Afghanistan which may create a new set of security problems for Kashmir. Last but not the least, parliament elections followed by the state assembly elections to be held in the state during the year will pose a special challenge for the security forces. Terror mongers operating from Pakistan are desperate to increase the terrorist strength in Kashmir before the elections which is the main reason for the drastic increase in ceasefire violations and infiltration bids all through 2013. The trend is likely to gain momentum in 2014 as election time comes closer. Clearly, the security forces cannot afford to rest on their laurels in the coming year!!