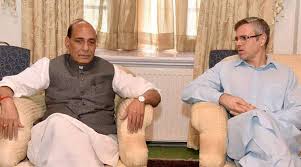 Political initiatives have seen an upswing in the last few weeks in Jammu and Kashmir. It seems that the central government is, once again, attempting to open a dialogue process in the restive state.

On September, 07, in what seems to be a prelude to the political activity,  Lieutenant General Devraj Anbu, General Officer Commander-in-Chief, Northern Command and the senior most army officer in Jammu and Kashmir, conveyed a strong message to Pakistan to desist from exporting terrorist activities into the state. “The surgical strike was a point we wanted to drive home across. The Line of Control (LoC) is not a line that cannot be breached. When we want to, we will be able to breach it (LoC), go across and strike them,” said Lt. Gen. Anbu in a press conference.

Talking about the ongoing National Investigation Agency (NIA) raids to choke the funds of the separatists, he said, “It has got direct links to the terrorist activities in the hinterland of the Kashmir Valley and the actions have led to a deterring affect on the youth and the stone-pelting has come down drastically as compared to November-December.”

On the heels of the aforementioned statement making it clear that there will be no let down in the pressure that the security forces are maintaining on terrorist elements within the state and across the border, Home Minister Rajnath Singh, embarked on a three day tour of the state, from 9 September to 11 September.

The Home Minister stated that the objective of the tour is to meet all stakeholders to find a political way forward and also discuss the current situation with the officials of the state.

A day or so before, a high powered Congress policy planning group led headed by former Prime Minister Manmohan Singh also descended upon the state.

The Jammu and Kashmir Study Centre (JKSC) is also holding a conclave and a workshop in Jammu during this period. JKSC is a Delhi based Rashtriya Swayansevak Sangh (RSS) sponsored think tank on Jammu and Kashmir. Delegates from across the country are congregating in Jammu for the event.

So far as the separatist Hurriyat leadership is concerned, its irrelevance is now all the more pronounced because due to the startling revelations that are being made in the ongoing investigation by the NIA.

As was expected, the Hurriyat ahs obviated any possibility of dialogue by issuing a Hartal (Lock out) call for the duration that the Home Minister will be in the state, especially so, when he is in Srinagar, all for the better of course.

In the meantime the terrorists operating in the Kashmir valley are continuing with their vile attacks despite the massive losses that they have faced in this year with more than 150 terrorist killed by the security forces. In an incident on Saturday, 09, September, one policeman lost his life while two others were injured in a terrorist attack on a police party near a bus stand in Anantnag.

It cannot be a coincidence that the incident took place 500 yards from venue of Union Home Minister Rajnath Singh‘s meeting that is going to take place on Sunday. The message is loud and clear, the centre will not be allowed to apply its policies in the s state without violent resistance from the forces of terror however weakened they may be.

The terror attack has received an apt response from the security forces with the killing of three terrorists and the arrest of one in two separate counter-terrorist operations in Shopian immediately after the Anantnag incident. In the tit-for-tat situation it is advantage security forces all the way.

It becomes quite apparent that there is enhanced activity in Jammu and Kashmir in the political domain since the security situation is firmly in the grip of the forces. All political entities are registering their presence and are proactive in putting across their respective points of view.

The high powered political activity is centred around Article 35-A, which provides some special rights to permanent residents of the state. The constitutional validity of the Article has been challenged in the Supreme Court.

Apprehension about the abrogation of Article 35-A has been conveyed to the Home Minister by the Congress delegation as also representatives of mainstream Kashmir based parties like the National Conference and the ruling People’s Democratic Party (PDP).

On the other hand, the West-Pakistan refugees, who have settled in Jammu region since partition of the country and are yet to get citizenship rights, have declared their intention of also challenging Article 35-A in the Supreme Court and thus add to the ongoing case.

Despite the attempt by a sizeable lobby in the state to resist abrogation of Article 35-A there is a significant segment quite determined to steer its abrogation through legal means.

Rajnath Singh and his party will need to address this issue with utmost political sensitivity. There is no scope for a cut and dried solution in this matter.

The security forces have given as message that whatever may be the political pressures and challenges they will not relent in tier pursuit of eradicating terrorism from the state, especially so the Kashmir valley before the end of this year. The strong statement by the Army Commander before the visit of the home minister to the state is an indicator that the security forces have complete support of the government.

With politics once again gaining predominance in the state on the basis of an improved security situation it is hoped that this opportunity, as in the case of earlier ones, will not be lost to the divergent opinions, especially so on Article 35-A. Since the matter of Article 35-A is sub-judice, it would be best to leave the courts to decide on the same. Others are living in India without a special status, there is no reason why the people of the state can also not do so and prosper in the bargain.

(Jaibans Singh is a reputed analyst, columnist and commentator)