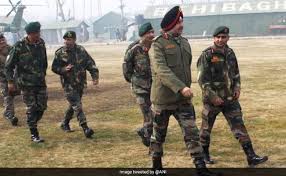 The situation of violence in Kashmir is the direct outcome of a reprehensible foreign agenda to strike at the fabric of the Indian nation, with the intention of breaking the country. The security forces in Kashmir are performing a most difficult, sensitive and challenging task. The soldiers have to balance between the need to break down the evil foreign sponsored agenda and at the same time ensure that the people do not suffer.

On both counts the security forces have acquitted themselves very well in the year gone by. Counter terrorist operations in Kashmir met with exceptional success. With 258 terrorist killed, 58 apprehended and five surrenders the count far exceeded the previous years. Most importantly, as many as nine A-Plus category terrorists, who formed the top strategic leadership of various groups, were killed during the year, leaving a huge leadership void. The operational success was achieved with minimum loss to civilian life and property which was yet another big achievement for the security forces.

Such success does not come by easily! It is the outcome of meticulous planning, synergetic effort, excellent intelligence gathering and a host of other coordination aspects. Good leadership definitely plays a big role in the smooth conduct of operations. The Government gave a free hand to the security forces with a clear direction to rid the area of the curse of terrorism. Senior commanders, on their part, were not hesitant in delegating full authority at the junior leadership operating on ground. Having delegated the authority, the senior commanders remained firm and steadfast in application of the laid down policy. Cowardly attempts by the enemy to instigate civilians towards disruption of the operations did not make the forces relent from their objective; they, instead, formulated good operating procedures for crowd control that worked well.

The senior commanders also demonstrated, on more occasions than one, their intention to stand with their troops despite the massive propaganda campaign unleashed by the enemy and the pressure exerted by some vested political interests and pliable media. Undeterred by the negative perceptions attempted to be created, the Army Commander of the Northern Command, Lt. Gen Ranbir Singh, during his interactions with the media minced no words in warning Pakistan that his command would punish the country for any activities that are detrimental to the security interests of India. “The message is clear to all troops on the ground that should Pakistan not stop from carrying out any activity which is detrimental to our national interest, they should be punished accordingly,” he said in November, 2018. In yet another statement directed at Pakistan has said that his command would constantly, “retain and refine its capabilities and be prepared for any contingency at any time.”  The statement by the Army Commander gave a big boost to the morale of the troops on ground and a sense of confidence to the nation that things are well in control. More importantly, it took the wind out of the sails of the enemy’s vituperative propaganda campaign.

The Army has also paid particular attention to the security of the Line of Control (LOC) by augmenting the fencing with smart technology and further strengthening it physically. The effort has accrued excellent results in neutralising of infiltrating terrorists. It is for this reason that the number of foreign terrorists operating in Kashmir is at an all time low and the local recruits do not have enough weapons, ammunition and other equipment. The Army, on its part, has improved on its weapon and equipment profile with state-of-the-art Sniper Rifles, Bullet Proof Jackets and other essential operational equipment. Provision of better administrative facilities has vastly improved living conditions leading to more operational efficiency.

The Army Commander Lt. Gen Ranbir Singh, has marked uplifting the youth of Kashmir is a key Result Area (KRA) for the Army’s civilian welfare initiative – Operation Sadbhavna. Special attention was paid to this aspect all through the year gone by. The second edition of Hunar-e-Kashmir, an annual Youth festival organised by the Srinagar based Chinar Corps held at Sher-i-Kashmir International Convention centre in October, 2018. The scale was much larger than the previous edition; it also included a performance by noted Bollywood singer Javed Ali. Shri Satya Pal Malik, Hon’ble Governor J&K was invited as chief guest and he personally interacted with the talented Kashmiri participants.

The other initiatives like the Super-40 which is designed to prepare students for competitive examinations in the Engineering stream and the many sports competitions held across the valley witnessed path breaking results. The Super-40 batch last year saw a record nine students clearing the coveted IIT-JEE mains while a total of 24 have been selected for various other engineering colleges. The Army Commander makes it a point to interact with many young boys and girls of Kashmir. In particular, he meets those who achieve laurels after being trained by the Army and the children who are sent to the other states on educational tours by the Army.

The vastly improved security situation in Kashmir was quite visible last year in the peaceful and incident free conduct of the Amarnath Yatra, the Local Urban Bodies and Panchayat Elections etc. There were less incidents of stone pelting, lockouts, strikes etc. The civilians went about their work in a relatively stress free and peaceful environment. A major credit for this situation goes to the good work done by the security forces.

While doing their job with utmost sincerity, the security forces, particularly the Indian Army, are being subjected to some harsh comments and criticism mainly by those who have no inkling of the very difficult conditions that they operate under. It is to the credit of the forces and their excellent leadership that they do not lose balance despite the environment of negativity and grave provocation that is attempted to be created. They are steadfast in their aim to rid the beautiful Valley of Kashmir from the debilitating shadow of terrorism. It can be said with a fair degree of confidence that the day is not far when they will achieve their objective. It would help a lot if their hard work and sacrifice is acknowledged.

(Jaibans Singh is a reputed Defence expert, Columnist and Author)