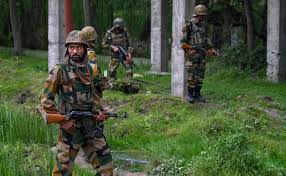 Terror mongers from across the border have had to contend with a large number of setbacks during the summer gone by. The season normally witnesses peak activity in terms of successful infiltration, terrorist initiated violence in the hinterland and disruptive activity in the urban areas in the form of strikes and shutdowns.

None of the foregoing activities witnessed even marginal levels of success, let alone the minimum threshold that is deemed to be necessary to keep terrorism and disruption alive in the Kashmir Valley.

Infiltration, which is the mainstay of the terror machinery operating in the state, was at its lowest ebb. Reports suggest that some 25 terrorists managed to infiltrate during the season. None from among these was able to reach up to the reception area from where onwards the work actually starts. Therefore, in real terms, infiltration remained, at best, negligible.

A last ditch effort made a few weeks back by the terrorists, was courageously thwarted by Colonel Santosh Mahadik, a dynamic Indian Army officer who was commanding a Rashtriya Rifles (RR) unit in Kupwara. The operation launched by him ended in his martyrdom.

The troops, in memory of their fallen commander, have not relented in their pursuit of the terrorists who are still in the area. Sustained operations continued despite one more officer, Lt. Colonel S.K. Natt, two soldiers of a Territorial Army unit and one personnel from the Special Operations Group (SOG) sustaining injuries. Such perseverance can be exhibited by none other than the brave soldiers of the Indian Army.

Those who aid and abet terrorism in the state have attempted to pressurise the army by speaking of the discomfort being experienced by civilians in the area due to the operations, Rumours have been spread that 20 villages have been restricted while the operation is underway.

However, Lt. Gen. Satish Dua, General Officer Commanding (GOC) of the Srinagar based Chinar Corps, has clarified that only a few villages have been cordoned off, and that too, to ensure the safety of the civilian population, especially so, since the terrorists being pursued are very well armed and dangerous.

The terrorists have also tried to divert the attention of the army from this critical operation by creating a diversion in the Tangdhar area with a direct attack on an army camp. Resorting to such diversions is common practice for terrorists, especially when they are under pressure as at present.

The well prepared army camp successfully thwarted the attack and killed all of the three terrorists involved.

Documents recovered from the bodies of the terrorists established their links with the Jaish-e-Mohammad (JeM), thus establishing that the terrorists under siege in Kupwara also belong to this Pakistan-based terror network.

A reaction of this nature from the cornered terrorists and their desperate masters was expected. It was spoken of by defences analysts and experts. Naturally, the security forces with their advanced intelligence gathering capability and professional capacity were well aware and well prepared.

It can be said with a reasonable amount of surety that this last ditch effort made by the terrorists to somehow resurrect themselves before the harsh winter sets in has failed. The terrorists in Kupwara may, at best, ex-filtrate, but they have no chance of getting into the hinterland. In fact, ex-filtration is also a remote possibility since the troops on ground, who have lost their beloved commanding officer, are unlikely to let them pass, whatever the odds.

This operation has also laid bare the strategy that terrorists are likely to adopt in the winter months ahead. They cannot let down the pressure of infiltration, since their fast depleting cadre simply has to be replenished. Therefore, infiltration bids along the Line of Control in Poonch and Rajouri will gain momentum. Concerted efforts will also be made along the International Border in the Jammu region.

Traditionally, terrorist activity goes down in the Kashmir Valley during the winter season, but this year, the terror strategists cannot afford to sit back in view of the setbacks faced during the summer.

Pakistan-based terror organisations like the Lashkar-e-Toiba (LeT) and JeM are also feeling highly insecure because of the emergence of the Islamic State (IS) as a player in the Kashmir Valley. Leaders of Kashmir-centric terrorist organisations like the LeT led by Hafiz Saeed have already made statements deriding the IS as un-Islamic. They are, however, well aware that any space provided to this malevolent organisation will lead to their decimation.

Under the circumstances they cannot afford to let down on their activities in the region regardless of difficulties faced and loses suffered.

As such, terrorist initiated violence can be expected in the urban areas all through the winter. There may be many more Kupwara-like operations and the LOC in Kashmir may also stay heated up.

The encounters are giving ample opportunity to the security forces to further weaken the terror structure to a degree that it becomes redundant.

This is the time for the government, the people, and especially the media, to correctly understand the broad picture and come out in full support of the security forces as they face the “do or die” challenge posed by terrorists and divisive forces.The evil players have thrown all that they have in the field, and it is absolutely necessary to come up with an appropriate response.