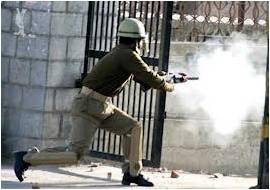 The events in the Kashmir valley over the last few days have been most disgusting and distressing. Five brave soldiers of the Central Reserve Police Force (CRPF) were killed in a terrorist attack at Bemina in the heart of Srinagar on March, 13, 2013, in broad daylight. Nine others were injured including seven more CRPF troopers and two civilians. The two terrorists involved in the attack were also gunned down but not before they had fired enough shots from their AK-47 Rifles and thrown enough grenades to cause this carnage

What comes across as disgusting in the entire episode is the unconcerned and arrogant attitude of the Kashmiri leadership and the state government. Let alone the chief minister, not one political leader or bureaucrat from the state came forward to pay last respects to the martyred soldiers; this when the chief minister is the chairman of the unified command of all security forces operating in the valley.

The fact would have gone unnoticed had some troopers of the CRPF not come up live on television to express their displeasure at the behaviour of not only the state government but also the government at the centre. It was only after strong condemnation in the electronic media that the chief minister grudgingly came to lay a wreath at the air port. Notwithstanding the wreath laying done under duress by the chief minister, the fact is that he has always been reluctant to pay last respects and condole the martyrdom of soldiers in the cause of Kashmir. On an earlier occasion also when an officer of the Indian Army died in operations Omar Abdullah did what he does best – he forwarded condolences on twitter.

The political leaders in the state, including those from the mainstream parties, are in a petulant mood because the central government has executed, Afsal Guru, an enemy of the nation and then refused to hand over his body to be buried in the valley. Not known for a high degree of moderation in behaviour, the leadership of the valley has failed to set aside this petulance in the face of the tragedy of vast proportions that had occurred in its own backyard. Nothing can be more unfortunate than this.

The distressing part of the whole episode is that the CRPF post was not fully ready or equipped to meet the terrorist onslaught because of the blinkered standard operating procedures for conduct of operations set out by the unified command. Most of the soldiers who lost their lives were armed only with “Lathis” (Police batons) due to some hare brained diktat of the state government that only a small percentage of a particular contingent of the force will bear arms while the others will carry riot equipment and wonder of wonders – Lathis.

A major portion of the blame must also be vested upon the officers of the CRPF who acquiesced to this disastrous policy. It is quite evident that there exists a huge disconnect between the CRPF officers and its rank and file. One cannot help but notice the relatively low percentage of casualties in the officer cadre of the force as compared to the troopers in the CRPF; if officers do not fight shoulder to shoulder with the troops how can they be expected to be concerned about their welfare?

In the arena of officer-soldier relationship full marks would go to the Indian army. The Indian army is consistently demonised by a large coterie of vested interests for holding firm on continuance of the armed forces special powers act (AFSPA) in Jammu and Kashmir. When seen against the backdrop of this terrorist attack one cannot but appreciate the stand as righteous and obligatory on the part of the officer hierarchy that is responsible for the security and welfare of its command. One hopes that, with time, this ethos will come in the police and para-military forces also.

That the coalition government in the state has gone into a contrite damage control mode is obvious from the fact that statements have started emanating from some state cabinet ministers alluding to imminent changes in the standard operating procedures to remove restrictions on the operational capability of the troops on ground. Though a welcome development, it also amounts to being too less too late. Those who have the blood of the brave soldiers on their hands are well aware of their complicity and will have to live with it. One can only hope that the errors will not be repeated in the future.

The political leadership in the state and the centre needs to understand unequivocally that bringing about a normal social and political environment in a region that has remained under the debilitating shadow of the gun for many decades is possible only if incidents of violence are not allowed to take place. Every security breach causes a setback to the process of normalcy; therefore, the security threshold has to be maintained at a very high level. It is not the people of Kashmir who are looking for a reduction in the security threshold, it is the dangerous game of political brinkmanship that is causing all the problems; every Kashmiri politician wishes to go down in history as the one who brought about revocation of the AFSPA; how this ambition impacts the common man and security in the region is not taken into consideration at all. The leadership must understand that compromising security for the sake of earning political brownie points is not a good idea at all.

The best way to atone for the sin committed by the collective leadership of the country in driving its soldiers into the jaws of certain death would be to take a firm, righteous and apolitical stand on the issue of security. It would be best to maintain vigil in excess of what is required or recommended by experts rather than subjecting the same to base level politics of opportunism.