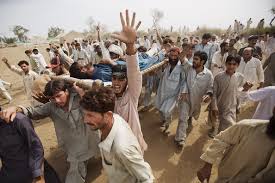 Violence during the Ashura procession is not new to Pakistan; in fact this is one occasion when the minority Shia community is specially targeted over and above the violence and fear that they have to face all the year round. This year, unprecedented security arrangements across the country were put in place to ensure a peaceful passage of the event. Rawalpindi, sadly, put paid to all efforts when a peaceful Ashura procession suddenly broke into a free for all riot. What exactly led to the violence remains a mystery; some media reports suggest that unknown persons snatched rifles from the hands of policemen on duty along the route of the procession and opened fire; a second version is that as the procession was passing by peacefully a nearby Mosque started its Friday sermon and this is what catalysed the violence. Whatever the reason, the end result was eight people killed, scores wounded and property gutted in a fire in a market (Raja Bazaar) and a Mosque. It is reported that crazed mobs went across the streets of the city thirsting for revenge to an extent that overwhelmed the administration.

Not to be deterred from their positive outlook the Pakistani establishment patted itself on the back for the peaceful culmination of the event in other parts of the country due to ‘fool-proof security arrangements’. At the end of the day Imram Khan and Sharjeel Memon congratulated the people of Khyber Pakhtunkhwa and Sindh respectively for the peaceful Ashura march.

The pats on the back and the accolades came a mite too soon; the very next day violence travelled from Rawalpindi to the Sufi city of Multan where 40 people were injured and five motorcycles burnt. The situation is said to have worsened when local clerics of the Jamia Mosque claimed that a group had raised objectionable slogans outside the Mosque after which reactionary events led to full scale rioting, tear gas shells, baton charges and finally the curfew. As things deteriorated the army and rangers had to be called out.

The matter did not end here, security personnel were attacked in three separate districts of Khyber Pakhtunkhwa with bombs and a suicide attack that left one official killed and 16 injured. The incidents included a remote controlled bomb in Peshawar and a second one later in the day at Dera Ismail Khan where the police officer was killed. Both the bombs targeted police personnel. The third incident was a suicide bomb attack in Bannu that left six injured. The body parts of the bomber were recovered from under a bridge.

The unfortunate events, even after a determined attempt by the administration to contain all forms of violence, reflect the deep rooted climate of bigotry and intolerance in Pakistan. They also indicate a disdain amongst the perpetrators of sectarian violence for the rule of law. Above all they offer a grim reminder about the insecurity of minority communities in the country. As things stand, there is a lingering fear of the violence cascading across the country.

There are voices questioning the Police reaction in Rawalpindi with a belief that what happened could have been avoided. However, the turn of events over the next day indicate that there is more to the entire proceeding than meets the eye. It could well be a well planned plot to instigate sectarian violence of an unprecedented level.

There are forces within Pakistan that are working overtime to further polarise the already fragmented society to an extent that the country is reduced to anarchic conditions. Despite the efforts that the governments, both federal and provincial, claim to be making to subdue the fundamentalist mindset there is no effect visible on ground. With each passing day more and more people, especially the youth of the country, are regressing into a shell of bigotry due to incessant indoctrination. All civilised norms are being set aside for the sake of a regressive ideology based on hate and prejudice. A situation is being created where no option other than conflict and a civil war will be left open.

In all this it is the poor, hapless common man who is suffering the most. He has to contend with the lawlessness and the attendant fear that it generates. He is looking into the face of imminent destruction of all that is normal in his life. It is his life that is being disrupted and torn into shreds.

It is time for Pakistan to take a call towards containing the state of affairs. Leaders can no longer sit on the fence and allow things to degenerate, they need to realise that they will also be consumed in the fire that is erupting all over. If they do not react in time the fundamentalist forces will achieve their objective of gaining absolute control of the country. Those who are supporting this evil cause from within need to be identified and marginalised before it is too late.

The world in general and India in particular need to look at the emerging trends with utmost seriousness. The way things are shaping out Pakistan will, soon enough, become the focal point of militant Islam with Afghanistan and any other country at a distant second position. Inaction at this stage will lead to horrifying consequences in the future. The matter gains even more importance in view of the impending drawback of the US and coalition forces from Afghanistan. Fundamentalist forces would already have detailed plans in place to exploit the situation both towards Afghanistan and India. The base is already being laid, it will be expanded as soon as a favourable situation comes by. Sectarian violence in Pakistan is attaining unacceptably dangerous proportions and all energy needs to be focussed towards containing the same. The seriousness of the situation needs to be impressed upon the Pakistani leadership and a time bound action plan evolved to intervene if things do not improve in the near future.