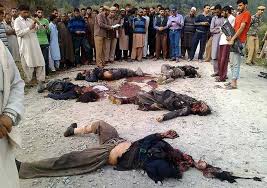 A good physique, fair complexion, well kept beard, natty combat fatigues, AK 47 in hand make the picture of a high end model out to give a macho look. The jolt comes when gets to know that the model is out to lure impressionable young minds in Kashmir into the fold of terrorism.

Burhan Muzaffar Wani, a terrorist aligned with the Hizbul Mujahedeen (HM) has recently become the poster boy of a propaganda campaign launched by Pakistan, mainly on the social media, to attract Kashmiri youth towards the path of terrorism.

As one of the most important assets of the terror machinery operating in the Kashmir valley, Burhan now fights less and poses for photo shoots more.  He has been seen in videos exhorting the police personnel and Special Police Officers of the state to leave service and join the ranks of the HM to “fight for their land.”   His photos are all over the social media. The campaign by Burhan is being supported with stories of policemen running away from the force to join the HM.

It is heart rending to see innocent young boys being led on a wrong and evil path in this manner. They do not realise that what they are seeing is a gimmick. In actuality, terrorist are like hunted animals, always fearful of the time when they will be shot in an encounter and knowing full well that the time is not too far.

With the Line of Control sealed the new local recruits cannot be sent across the border into Pakistan w for training as was the case earlier. They are, therefore, given some rudimentary instructions, handed over a rifle and some ammunition and let loose. They are no match for the highly professional and experienced security forces. On top of it they lack local support. As a result have a very short life span with some being shot down in encounters within a month of being inducted into this evil business. .

Burhan Wani is being projected like larger than life terrorist commander; the fact is that he and his associates in the videos measure poorly in comparison with the top the commanders of yore. They are young boys who look weak and effeminate when compared to the foreign terrorists who held sway earlier.

The terror strategists sitting across the border want only to maintain the head count and get a terror incident or two from these poor boys before the curtain falls on them. It is nothing more than a numbers game.

Those vested with the responsibility of recruiting local terrorists look for boys from poor families who are ready to sell their souls for a small amount of money and promises of a bright future in this world and beyond. That their parents have sacrificed a lot to educate them adds to the misfortune.

The government needs to launch a strong information campaign to counter this evil propaganda by foreign sponsored elements. The people, especially from a rural areas and a poor background, have to be informed and educated about the evil design and told the consequences of their boys following a wrong path.

It is also necessary to expose the Pakistani design behind this propaganda campaign. Pakistan is now realising that it will not be able to sustain terrorism in Jammu and Kashmir for long. Successful infiltration is decreasing by the day and the number of foreign terrorists operating in Jammu and Kashmir is fast dwindling; it is now less than forty percent of the total terrorist strength operating in the state.

Recruitment of local cadre is the only recourse open to keep the so-called insurgency (terrorism) alive in the state. Naturally, Pakistan is employing all possible means towards this end. The likes of Burhan Wani attracting gullible youth is one potent tool being used. The other is money and assurances of a good future in this world and beyond.

To say that Burhan and his associates represent a new resurgent face of terrorism in the Kashmir valley is totally off the mark. Security forces in Jammu and Kashmir are well in control of the situation. Both terrorism and infiltration are on the decline and the likes of Burhan cannot change the circumstances in their favour.

Unfortunately, there are some powerful lobbies in Kashmir that have a vested interest in keeping the pot boiling. There is an urgent need to identify, expose and neutralise them.

Media is a very important means for dealing with foreign sponsored propaganda. It is important for media to highlight the dangerous design of the likes of Burhan Wani. It should expose the misinformation being spread and highlight the actual situation. To glorify criminals in the eyes of gullible youth does not serve the purpose of the nation.

What is happening presently is a desperate attempt by the terrorists to stage a comeback. A strong response that negates this design may well serve as the last nail in the coffin of this evil activity.

The terrorist agenda is now on a different level and the time has come for the government to meet the challenge head-on. A counter strategy more in tune with the times needs to be to be put in place and applied with great resolve. Efforts have to be made at the individual, community and mass levels.

Under no circumstances should terrorism be allowed to raise its ugly head in Jammu and Kashmir once again. More importantly, the youth need to be saved from losing their precious lives for a lost cause.

(Mehtab is a US based Engineer with interest in J&K)