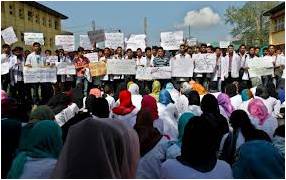 The Kashmir valley has, for long, been a forefront victim of the global terrorism being perpetrated, quite erroneously, in the name of religion. This is the only place in the world which witnessed proliferation of an armed insurgency by international Islamic warriors alongside a, extremist Islamic resurrection in Afghanistan. Pakistan being in the centre of both movements was, naturally, the architect of the violence in both regions, with Saudi Arabia playing a significant role. The tactics that were mastered by Pakistan in Afghanistan were employed most effectively in Kashmir with devastating results. As a result, for the last two plus decades perfect peace has eluded the valley even though the situation is much better than what it was when insurgency was ignited. The last couple of years could be called as the years of relative peace but definitely not perfect peace.

Now a new security threat seems to be emerging in Kashmir; on June, 25th, the centuries old shrine of a revered Sufi saint of Kashmir, Dastageer Sahib caught fire and was reduced to ashes; no fingers were pointed since investigations revealed the cause of fire to be a short circuit. On July, 16th another Sufi shrine of Baba Haneefuddin in Budgam was gutted. Immediately, a large number of Kashmir based newspapers and some Jammu based dailies like the Kashmir Times started hinting towards a conspiracy. “This appears a conspiracy. First it was Dastageer Sahib shrine, and now within few days, the Budgam shrine is gutted mysteriously. It cannot be a mishap,” said Zareef Ahmad Zareef, President Valley Citizen’s Council, as reported by Kashmir Times. By what authority Zareef Ahmad made this statement remains a mystery but he made it and some newspapers thought it fit to carry the same. In the month of August, in a rare incident in the valley, a youth was killed in a sectarian riot between Sufis and Salafi’s. The valley has seen killing of Kashmiri pundits and violence between Shia and Sunni sects but for the first time violence has taken place between the same sect since both Salafi and Sufi follow the Sunni tradition of Islam. These happenings points towards something sinister that seems to be happening in Kashmir. It looks like some people are making a concerted effort to eliminate Sufi shrines and by so doing are targeting the Sufi tradition which is at the core of Kashmiri culture.

Salafism is on a rampage globally; in the last few months Salafi’s have desecrated Sufi shrine in many places across the world from the Caucasus to Arab-Africa to Kashmir and nations in between. The most notable is the desecration of Sufi shrines in Timbuktu, the capital of Mali, which is also famous for its Islamic institution and Sufi shrines. Some of these shrines are part of the world heritage list.

The support for violence in Kashmir has gone down and fresh recruits are not coming by in sufficient numbers to support the terrorist movement. This has led to a decline in the graph of violence in Kashmir. Peace in the valley is testimony of many things; firstly, it tells that the efforts of the armed forces have paid dividends. Secondly, a majority of people in the valley in last few years have not been supporting Pakistan’s agenda, and finally less and less people look at the gun as an answer to perceived or real issues. However, the moot point is a well established reality that no organised violence stops suddenly and this point remains predominant in the valley even though a decline in violence has happened.

The perpetrators of violence have now changed tack to sow the seed of fundamental Islamism by promoting the extreme cult of Salafism. This is because around a quarter of Kashmiri people follow the Salafi-Sunni tradition and it is easy to find recruits from this segment. The recruitment on religious grounds was next to zero a decade back, now it is gaining momentum. Saudi money has brought with itself the Salafi ideology; money has given access to such Mosques and Madrasas where the conversion and indoctrination can be carried out.

Now the latest tactic is to ride the international Islamic revulsion for the “Anti-Islam film” made in America. Undoubtedly, people across the world have condemned the film but why is the reaction so violent in Kashmir that curfew needs to be imposed? The separatists who knock the door of the United Nations for every conceivable reason should do so in this instance also. What can be achieved by disrupting the lives of the poor people? This incident is also being used to the hilt to whip up passions.

These days, people who are not so intimately associated with the development in the valley have started taking peace for granted. They are quite impressed with the rising levels of tourism and economic activity which gives a general impression that the tide has turned. But if one sees the reality very minutely one would realize that this is just a passing phase of relative peace. Religious divide within the Muslim community itself is a new and menacing entrant in the environment of the valley which has serious potential to shake the hard earned peace. It is time to identify the changing societal norms and take immediate action to stop spread of disinformation and communal hatred designed specifically to further a few well known inimical interests. It is also time to understand that the enemies of the valley are planning something big. They are working slowly and surely towards another big game. In case the spread is not nipped in the bud immediately there will be some serious security consequences.