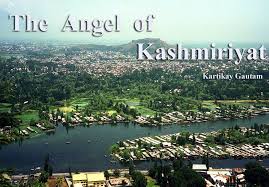 For too long now the valley has teetered from one cycle of violence to the other. The ongoing turmoil has brought to the fore the necessity to find a long term solution to the issues involved.

The Vajpayee model of “Insaniyat, Jamhooriat and Kashmiriyat” (Humanity, Democracy and Kashmiri Culture) has emerged as a viable concept on the basis of which the matter can be addressed. Its invocation at this stage has merit.

Resurrection of Kashmiriyat is by far the most sensitive prong of this policy; it is also the most challenging!!

In Kashmir, Shaivism and Buddhism flourished in tandem with Islam that has remained the prominent religion since the 13th century. Sikhism witnessed an advent in the 18th and 19th century (when the rule of the Sikh empire extended to the valley) and was embraced in a similar and seamless manner. Kashmiriyat, thus, epitomises an age old norm of synergised coexistence that has been practiced in the Kashmir Valley since times immemorial.

Islam in Kashmir followed a concept of Sufi mysticism that was quite different from the concepts prevalent in Central Asia/Middle East and proliferated to the Indian subcontinent. Sufism gave to Kashmir its own set of saints who were revered with equal fervour by all communities.

It is argued that the concept of Kashmiriyat is not different from the practice of universal brotherhood prevalent in the rest of India and epitomised by “Vasudhaiva Kutumbakam,” a Sanskrit phrase found in the Upanishads denoting that the world is one family.

There is merit in this articulation, but the subtle nuances that make Kashmiriyat different need to be understood. While the enlightened civilisation in India respects the right of as fellow human being to pursue his/her religious inclination, Kashmiriyat involves reposing faith in a number of different religious thoughts.

All Kashmiris – Hindus, Muslims, Sikhs and Buddhists, revere the Sufi saints of their holy land like Lal Ded and Nund Rishi with equal fervour. A Kashmiri Muslim Malik family has dedicated itself to the Shri Amaranth Shrine for centuries. There are many more examples of this seamless harmony of the land.

At the time of partition, when the entire subcontinent was engulfed in fires of religious hatred, the Kashmir Valley exhibited exemplary cohesion and that too in the face of a brutal invasion by Kabalies (Pakistani mercenaries). While the invaders indulged in untold pillage and atrocity, voluntary groups comprising of all communities were formed to ensure security and communal harmony.

Once the invaders were driven back, all Kashmiri Pundits, Sikhs and others from minority communities who had run away to save themselves came back to their home and hearth. Thus, despite the turmoil that the subcontinent faced and despite the brutish invasion by Pakistan, the Kashmir Valley kept Kashmiriyat intact.

The ethnic cleansing that led to the exodus of the Kashmir Pundit community from the valley in 1990 was engineered mostly by foreign terrorists who had infiltrated in large numbers from Pakistan. These terrorists were indiscriminate to the extent that once the Kashmiri Pundits had left they turned their wrath onto Kashmir Muslims and inflicted upon them inhumane atrocities for more than a decade before they were contained.

Terrorism also brought in its wake a well planned and coordinated programme to break the Sufi culture of Kashmir and replace it with a more fundamentalist version of Islam. Coercion, money power, corruption and such like means were used to break the will of the Kashmiris.

Mosques and Madrasas (Religious schools) were taken control of and a fundamentalist version of Islam propagated. The education system was infiltrated to ensure that younger generations were kept ignorant about the great religious and social history of their land and instead taught fundamentalist concepts that were alien to them and the region.

All this was done while the authorities were busy containing the scourge of terrorism and did not have the time, or the means, to counter this social onslaught.

Once terrorism was contained the scope of the conspiracy hatched by the enemy to break the cultural backbone of the people of Kashmir became evident. The young boys of Kashmir who are out on the streets pelting stones at security forces have in their minds a warped and indoctrinated narrative of what ails their society. They have been kept isolated from the history and culture of their great land and are under the influence of a fundamentalist religious concept that their community has never related to.

They have been misinformed and misled to an extent where they are exhibiting unfettered hostility against the Indian Army. They have failed to realise and appreciate that this organisation has, since independence, come to the aid of their people unhesitatingly and unilaterally in all difficult times – be it guarding of the borders, fighting evil terrorist forces or providing life saving support during natural calamities, not to talk of the social welfare measures adopted for their benefit.

The need to bring about a change in the mindset of the younger generation cannot be overemphasised. It is here that maximum effort needs to be directed, even more than the agenda of development that is presently holding a position of primacy in government policy.

It is in this context that the revival of Kashmiriyat and its application in resolving the ills that are facing Kashmiri society due to foreign influence gains significance. The governments at the centre and at state level need to evolve a strategy to offset the damage caused.

A good beginning would be to counter the proliferation of fundamentalist Islamic principles and reconstruct the concept of Sufism that is central to the Kashmiri way of life. The education sector also needs to be revisited to get it more in tune with contemporary practices. Most importantly, the youth needs to incentivise itself towards productive activity through sports, entertainment and exposure to the rest of the nation. The feeling of isolation needs to be quelled.