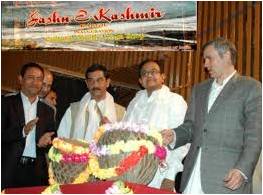 Union Home Minister, P Chidambaram, on Wednesday, May, 23, visited Jammu and Kashmir. The objective of the visit was to review the security situation and status of development projects in Jammu and Kashmir in the given order of priority. The meeting, held at Nehru Guest House, witnessed a proactive Chidambaram talking of more and more freebies for the state. He was totally enamoured by Ladakh and Kargil where he, along with Chief Minister Omar Abdullah had, before landing in Srinagar, inaugurated ‘Jashn-e-Kashmir, a workshop held in Kargil to impart training to the youth of Jammu and Kashmir in folk culture and art of the state.

The matters discussed in the meeting were routine. These included preparations for the conduct of the Amarnath Yatra; the tourist season in the Valley; progress made on the surrender policy; interlocutors’ report and other such issues.

The routine nature of the briefing would have left one wondering about the need to hold the same at all. The agenda, however, unfolded as the meeting progressed. Omar Abdullah tried to exploit Chidambaram’s new found fascination for Ladakh by pressing for the early construction of a tunnel at Zozilla to improve access of Ladakh from Srinagar, he also talked of installation of Srinagar-Leh transmission line and four-laning of the highway. This apart, certain information that is in concert with Omar’s political line of thought was also fed to the Home Minister, he was told that the graph of militancy is at its lowest ebb; he was briefed about the prevailing security scenario along the line of control as well. Interestingly, the Army is responsible for the security of the line of control and it was not consulted for the briefing. In fact, according to media reports, army representation was conspicuously absent in the meeting.

The Home Minister gave an assurance that the central government would take all necessary steps to accommodate development needs of Jammu and Kashmir, especially the twin districts of Leh and Kargil. He also committed that work on Zojila tunnel would start soon; he disclosed that a proposal was under active consideration to start commercial air services to Kargil. He also said that Zanskar would also be connected with Leh and Kargil by helicopter service. Thus, the meeting lost out on its security agenda and veered towards what the State government is constantly looking for, dole form the centre in the name of development.

Only a few days after the meeting, a 23-page study – “Role and Functioning of the CRPF”, carried out by the Delhi based Institute for Defence Studies and Analyses (IDSA) against the backdrop of the massive protests in the valley in 2010 was released. It identified a perception amongst the personnel of the CRPF functioning in the state that the state police exploits them by first using them as a shield and then passing onto them the blame for human rights violation. The study goes on to elaborate that in some instances the FIR’s by the CRPF are not lodged while people’s FIRs against the CRPF are easily lodged. The force looks upon itself as the favourite punching bag of the people, the police and political parties in the valley. It is the target of vigorous negative propaganda in local newspapers, especially in the Urdu press. Lack of support from civil administration compounds the problems. Overall the study paints a dismal picture of the morale of the force in the Valley.

It is inconceivable that the Home Minister was not in the know of the low morale in the force which comes under his authority. This is what he should have been talking about in any conference on internal security held with the government of Jammu and Kashmir. Sadly, not one word on this critical and sensitive aspect was spoken.

The IDSA report and other inputs on the subject should give reason to the Home Minister to reflect on the unmitigated support that he is providing to the misconceived campaign against the Armed Forces Special Powers Act. Chidambaram should realise that any dilution of the act will put even the Indian Army personnel in a debilitating position similar to the one that his troops in the Valley are facing. He should concentrate on improving the lot of his troops functioning in the Valley for whom he has direct responsibility rather than mollycoddling his favourite Chief Minister. He should seek more powers for his troops under the Indian law, especially CrPC Section 197, which provides immunity from prosecution to government personnel in the discharge of their functions. This Act is not applicable in Jammu and Kashmir which is administered by the Ranbir Panel Code

One is often left wondering at the propensity of the government of Jammu and Kashmir when it comes to seeking assistance from the centre. Such requests range from security, to infrastructure development to financial assistance for day to day functioning. If the tourist season is doing well the state government will ask for more central aid to give a boost to tourism; nobody questions them as to why they cannot, by themselves, build up this commercial segment of their economy which is generating profit. There are many other states in India which are facing a multitude of problems; we have internal security challenges in Naxal affected areas; other states are lagging in the growth story. The government at the centre is not exactly bending backwards to redress the problems of these states, in fact, those with a non UPA led government have been left to fend for themselves as in the case of Chhattisgarh, yet they are doing quite well. Why then is Jammu and Kashmir perpetually on the lookout for special treatment? If the situation is fast veering towards the normal as the Chief Minister of the state is always stating the state should be expected to take some credible steps towards self sufficiency.