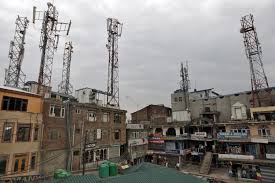 The disgust shown by the people of Kashmir towards the blatant and malevolent terrorist attacks on the telecom sector in Kashmir has had the desired results within the ranks of the divisive forces as well as the government.

The credit, in no small measure, also goes to the media that communicated the disgust as well as the immorality of the terrorist acts most accurately and lucidly despite the attendant danger.

The joint people/media fight back to the terrorist challenge has resulted in leaders of the Hurriyat Conference quickly condemning the attacks on telecom operators and the owners of mobile towers. The terrorists organisation Hizbul Mujahideen (HM) has denied any involvement in the attacks even as a relatively less known outfit, Lashkar-e-Islam (LeI), has been called upon to become a scapegoat by taking responsibility.

It would be pertinent to take note of a statement by JK Police that it was not LeI but cadre of the HM who carried out the first attack at Sopore. HM brought the LeI to the forefront to divert the expected negative reaction. The ferocity of the backlash has taken HM by surprise and put it on the back foot.

Syed Geelani, in his typical style , has put all blame on the “security agencies.” He has gone a step further to insinuate that the LeI is a creation of the Union Home Ministry to “defame the freedom struggle of people of Jammu and Kashmir.”
One should, of course, not take such incredible utterances by Geelani seriously, his incredulous insinuations, since long now, have been no more than a figment of his aging imagination and attendant hallucinations.

The separatist and divisive elements have realised that their carefully planned and implemented initiative to take Kashmir back to the stone age has backfired. They have felt the wrath of the people and are now in damage control mode.

In keeping with his image of being an astute politician, Chief Minister Mufti Mohammad Sayeed has waited for the separatist and divisive forces to wrap themselves round in circles before taking official action against the criminals. Now that everybody is trying to throw away the hot potato, he is in overdrive. He called a meeting of senior civil and police officials to “discuss the situation.” He then went a step further to state that, “mobile and internet services have become integral to modern-day functioning in government and others sectors.”

Surely every right thinking person in India, even with elementary education, would be aware of the importance of mobile and internet services. The notable point is that Mufti took his time to realise the same and caused avoidable inconvenience to the people who have voted for him.  His reaction to the problem comes across as more political than spontaneous and leader like.

One cannot help but agree with the traders organisations in the valley that are demanding a thorough investigation in the matter to identify the actual culprits and to give to them exemplary punishment. “We urge the state government to investigate the matter and unveil whosoever is behind it….. No one knows who is doing it, who are behind these attacks and threats. It has to be sorted out as soon as it can be otherwise it will badly impact the people across the valley,” says Siraj Ahmad of Kashmir Economic Alliance.

In case the government is serious about its commitment to invite investment to the valley; in case the government wants the youth to prosper, then it should take the advise given by the Kashmir Economic Alliance seriously. In the cycle of disruption and blame game it is the common man who is suffering the most apart from a negative impact on business.

Mufti has to realise that his obsession with the “bigger objective,” the “bigger picture” and the “historic opportunity” that he keeps talking about cuts no ice with the people. The only concern of the common man is that incidents like the attack on the telecom sector do not occur and he is allowed to go about his business without any problems. This is what is expected of Mufti and his government and this, sadly, seems to be his last priority. He is finding it difficult to move away from his first love for politics to the necessity of good governance.

The state government bends backward to emphasise that the state, including the Kashmir Valley, are witnessing absolute normalcy. On ground , however, we have a situation where a fringe terrorist group has successfully held at ransom the entire telecom sector for days on end.  Officials figures state that out of 2,903 towers of six telecom companies across Kashmir Valley, 1,058 towers were shut due to attacks and threats by the little known LeI. More than 200 BTSs (Base Trans-receiver Station) that facilitates communication between user equipment and network, went out of service in Srinagar city just hours after the blast at Habbakadal.

These are not indicators of a state of normalcy. Events, in fact, dictate a proactive security response to the emerging situation.

As things stand now the government has not done much to contain or diffuse the situation. If anything it is a peoples victory over forces of evil. The  forces of divisiveness and terror are relenting because they are scared of the wrath of the people. The role of the administration and politicians of all hues in the valley has been miniscule. It is hoped that the system will change for the better in the near future.