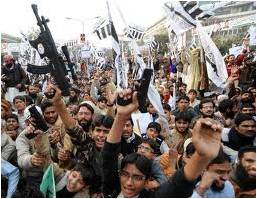 The state of Jammu and Kashmir has, for quite some time now, been standing on the threshold of a turn over from the cult of foreign sponsored violence. What is coming in the way is the evil intentions of powerful international players who feel that they have a stake in the future of Kashmir. These self appointed stake holders completely disregard the interest of the people and maintain self interest as paramount.

Premier amongst those who have an inimical eye on the beautiful God gifted land is Pakistan. No amount of internal problems, international pressure, logic or political expediencies can drive away a select lobby in the country from trying to break the region away from India. Even as the country prepares to go for elections on completion of the first ever tenure of a civilian government, there are reports coming from the US that Islamabad may turn to its most trusted militant group, the Lashkar-e-Taiba (LeT) to “reorient to and invest more broadly in the conflict in Kashmir”. The report suggests that this would happen in the wake of reduced Pakistani militant engagement in Afghanistan after withdrawal of US forces. This is not extraordinary intelligence; many Indian analysts have been giving a voice to such apprehensions for quite some time now; what is significant is that even the US has started thinking on similar lines.

Terrorism in the valley may be dormant but the remnants of terror groups, under constant pressure from their masters across, do not relent from making attempts to resurrect the movement or at least keep it alive with sporadic strikes. Yet another Panchayat representative has been killed by terrorists in the Pulwama district of the valley on the night of Monday, April, 08. Panches and Sarpanches are soft political targets since they do not have the protection available to ministers and bureaucrats. They are, as such, being exploited by the terrorists for their nefarious agenda. The odd opportunity that terrorists get to target security forces acts as an additional and welcome bonus. Under these circumstances, a resurrection of terrorist strength by even a few committed cadre of the LeT can change the equation in the valley.

President Asif Ali Zardari has recently said that Kashmir continues to be a corner stone of Pakistan’s foreign policy, what can be deduced from this statement made on the eve of elections in Pakistan? The moot question is – will the US do something about the apprehensions been voiced given the fact that India had reduced pressure on its borders with Pakistan at its behest. Troops were de-inducted by the Pakistan army from its eastern border with India to the western border with Afghanistan only when India gave a solemn assurance that it will not exploit the vulnerability thus created. Will India be repaid for its maturity and trust with a revisit of terrorism from across the border while the US remains a silent spectator to this perfidy of a rogue nation?

Coming to the internal dimension, one cannot help but remain skeptical of the manner in which politics continue to be played out in the valley. The reported financial loss to the industry in Kashmir due to the orchestrated agitations in the aftermath of the execution of Afsal Guru is pegged at Rs 4500 crore and counting. The tourism and handicraft sectors, that are the life line of the valley, have been the worst hit. In case things do not take a turn for the better, the upcoming tourist season would be in jeopardy, a situation that would be critical for the common man.

Despite the fact that the people of Kashmir want to go about doing their work in a safe and uninhibited environment some political forces are simply not ready to allow basic aspirations to bear fruit. Not too many days ago on March, 31, the Chairman of All Parties Hurriyat Conference, Mirwaiz Umar Farooq, reaffirmed his conglomerates resolve to continue with politics of agitation and disruption till such time that the misplaced goal of separatism is not achieved. The separatists are spreading open propaganda to project their so called struggle as one with an international dimension when the reality is that nobody is interested in their line of thought. How the why Mirwaiz and his cronies are allowed to project themselves as leaders of the masses and the voice of Kashmir and why the Indian government does not take firm action to ban their anti-national activities is a big mystery.

In preparing to meet the emerging situation the first and foremost requirement is security. There can be no let down in the security paradigm. In fact, security along the possible avenues of infiltration needs to be enhanced to counter the possible infiltration of committed LeT cadre and intelligence in the hinterland needs to be given a boost to ensure that those who manage to get through are neutralised before they can cause any real harm. Quite evidently, the security forces will have a lot on their hands in the coming months.

Beyond the question of security, there is also a need to adopt some bold political postures in the national as well as state level. The US has to be pressured to put a hold on the evil designs of its most abiding ally. It is time for pay back to India for the assistance provided in the war in Afghanistan. Within Jammu and Kashmir, instead of fighting with each other the mainstream political factions should get together to expose the hollowness and self interest that guides separatist policies and actions.

Bold actions may not be easy to come by but there is no alternative in case the region has to be saved from degenerating back into the cesspool that it has emerged from after herculean effort. Under no circumstances can a revisit of the dreaded times gone by be allowed.