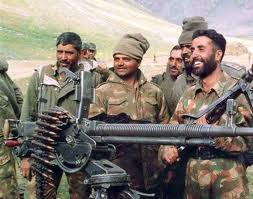 July, 26, 1999, was a fateful day when the Indian Army put paid to yet another audacious misadventure by Pakistan in the unforgiving heights of the Kargil and the Batalik sectors. The Kargil war, that witnessed fighting in heights up to 18000 feet with extremely low temperatures, culminated with the complete routing of the enemy and physical re-possession of ground that had been occupied by stealth and deceit. The war also revisited the traditional bravery, fortitude and sense of duty that epitomises the Indian soldier who fights courageously, fearlessly and without complaint under almost impossible conditions. The soldier, once again, left no doubts about his capability and his commitment to defend the nation despite all odds. Victory was achieved with the sacrifice of 537 brave sons of India; no less than 86 gallantry awards were won during the course of the war. Here, one is reminded of the famous Kohima Epitaph composed by Major John Etty-Leal, “When you go home tell them of us and say for your tomorrow we gave our today”.

There is a deep feeling of pride and nostalgia amongst common Indian citizens on this day. All Indian nationalists remember their heroes who sacrificed their lives for the sake of the sovereignty and territorial integrity of the nation and the safety of their countrymen. Social media sites remain abuzz with messages, poems, Epitaphs etc in memory of the heroes. “Kargil Vijay Diwas ke avsar par sheesh jhuka kar naman un veer jawano ko jinhone Bharat Ma ke charano mein apne prano ko arpan kiya’ (On the occasion of Kargil Diwas I bow my head in memory of those brave soldiers who sacrificed their lives on the feet of Bharat Mata) is a sensitive tweet posted by the BJP leader Smirit Irani; it represents the overwhelming feeling of most Indians; the nostalgia, deep sense of pride and humility that marks the day.

The Indian army does its bit to keep the memory of the heroes alive. Functions are held in all army cantonments but especially so in Dras under aegis of 8 Division that took the maximum brunt of the War. As before, this year also the commemoration included, among other functions, a pipe band display, beating of the retreat and a memorial service led by General (Retired) VP Malik, who was Chief of Army Staff of the Indian army when the war took place. A number of senior dignitaries, both serving and retired, gallantry award winners, parents and relatives of Kargil heroes were present at the ceremony.

Sadly, the apathy of government of India and that of the state of Jammu and Kashmir towards its heroes brings in its wake a deep sense of despondency and desolation.

The government of Jammu and Kashmir has declared July, 13, as a public holiday because on this day in 1931, some Kashmiri youth were killed in firing by the Jammu and Kashmir state forces under the erstwhile Maharaja of the state. One has no issue with the commemoration, the sentiment or the holiday. The issue is that the State government does not consider it fit to remember the sacrifice of so many brave Indian soldiers who gave their lives for the cause of Jammu and Kashmir first and then the Indian nation in the same month of the year. As a small reminder to the government, 69 of the brave soldiers of the Indian army who died during the Kargil war hailed from Jammu and Kashmir; of these 27 were from Ladakh, 36 from Jammu and six from Kashmir. Surely, an occasion like Vijay Diwas offers an apt forum for at least a remembrance if not a holiday.

There are many initiatives by nationalist forces in Jammu and Kashmir to keep the memory of the war alive. This year, prominent amongst these was a function held at Jammu by a NGO, Duggar Vikas Manch. During the function the supreme sacrifice of the Indian soldiers especially the heroes who hailed from Jammu and Kashmir was remembered and rich tributes paid by well-known members of civil society including many retired generals from the State. The widows of some of the heroes were also invited and felicitated. One can only hope that good sense will prevail by next year and the state government will consider it fit to break its stony silence.

Coming to the Government of India, the Union Defence Minister did lay a wreath at the Amar Jawan Jyoti in New Delhi along with the service Chiefs but this is where the contribution of the UPA government ended, as always. Some years ago, during the 10th Anniversary of the Kargil war that fell on Sunday, July, 26, 2009, the Nation, through the ministrations of the media was reminded of the saga of its brave soldiers at a scale that was a little higher than what is seen in other times. The hype was enough to galvanise our politicians into shedding, for a moment, their petty feuds and coming forward to acknowledge the bravery of their soldiers. Good sense finally prevailed upon Prime Minister Manmohan Singh to get over the political constipation of his alliance in denying brownie points to the NDA for the resounding victory. He broke the UPA precedent of ignoring the war all together by laying a wreath at the Amar Jawan Jyoti. He, however, could not get over the political expediency of restricting is message to nation building with minimal emphasis on the bravery of the heroes who brought glory to the nation. Ever since he has maintained his famed silence – so much for patriotism.

The deep respect and high esteem at which the people of this nation hold their armed forces and their soldiers is the only thing that is keeping the soldiering community going. The politicians are leaving no stone unturned in isolating the community to breaking point. One can only hope that good sense will prevail soon enough because a country that does not show respect to its soldiers and its heroes is doomed for sure.