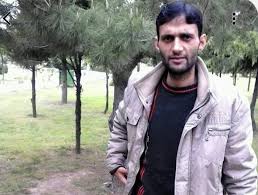 It could only have been providence that brought us together; how else does one explain the accidental meeting of two completely unknown individuals desperately needing each other. It was 2010, and I was walking down the road in the heart of city when a young man walking ahead who had suddenly stopped and I accidently bumped into him. However, the fault was entirely mine as I was walking absentmindedly-being preoccupied with the anxieties that haunt a man trying his hand in a new venture. In my case things appeared to be a bit more serious because even though I was trying to realise my childhood dream of publishing my own newspaper, I had no inkling of how exactly to go about doing this job.

Even before I could apologise, the young lad respectfully begged forgiveness and enquired if I was feeling fine. Due to some bitter experiences in the past, I had my own misgivings about the younger generation and felt they were ill-mannered, selfish and insolent. Seeing this young boy behaving so politely came to me as a very unexpected but extremely welcome shock and I asked the stranger who he was. He introduced himself as Tanveer-ul-Ahad and as we both started walking besides each other, I struck a conversation with him talking about mundane things that people usually discuss. As we came close to ending our conversation, I casually asked Tanveer what he did for a living and to my utter surprise he told me that he was a ‘newspaper designer’ and was looking for a job. I was really dumbstruck!

Just imagine – here I was blaming bad fortune for my inability to get hold of a newspaper designer despite vigourously searching for one, and the person I was looking for so desperately happened to be walking right beside me. I told him that I intended to start a newspaper and he boosted my sagging morale by not only assuring me that he was willing to join me but also use his contacts in the media to promote my newspaper. We met again and teamed up together and thanks to Tanveer’s indefatigable sprit, I was able to launch my newspaper (Daily Brighter Kashmir) on September 10, 2010. As time passed, our association became stronger than ever and soon we had gone much beyond the level of formal employer-employee relations.

Being new to media, the initial going for me was far from smooth and there were times when I felt that I couldn’t handle the multifarious challenges and threats that a newspaper publisher has to face. It was during such depressing times that Tanveer stood by me and became my pillar of strength – I can never forget those days when, at times, we spent up to 20 hours together. Tanveer’s strong point was that besides being far more mature than people of his own age, he had exceptional clarity of thoughts and an uncanny ability for putting things in the correct perspective.

I strongly believe that the version of all parties involved in any event or incident should be honestly presented, but doing so in a conflict zone can at times prove to be a risky thing. It was in such situations that Tanveer used to jokingly tell me, “we may be able to swim or we may sink, but we’ll do so together!” His support gave me the courage to cover news, views and opinions of every colour and hue. As time went by, Tanveer also proved his expertise in news reporting with an innate ability to elicit news from even the most tight-lipped officials and public personalities. Seeing his extraordinary skills, I suggested that he should consider fulfilling his dream of having a New Agency of his own.

He accepted my suggestion and by putting his whole heart and mind into this job, was able to establish his own news agency which he named ‘Global News Agency’ (GNS). Due to his diligence and eye for detail, GNS came to be widely respected as one of the most credible news aggregators in J&K. Almost every newspaper, whether big or small, relies on GNS for news because of its accuracy and the wide range of news coverage. But despite this success, Tanveer decided to put his excellent journalistic skills to the ultimate test by starting his own newspaper and beating all odds succeeded in publishing his own daily named Kashmir Glory. Within no time this newspaper earned its name and is considered amongst the leading dailies been published from the valley.

If there was anything that exceeded his professional abilities, it was his character qualities and his genuine desire to help others. Tanveer came from a remote village named Muqam Shahwali in Kupwara and his spectacular achievements, which reflected his sustained struggle and passion for fair and objective reporting served as a source of inspiration for others. He also helped and guided numerous budding journalists who shall always remain indebted to him.

Tanveer’s untimely demise on May, 11, came as a big shock for new readers of Kashmir in general and to the journalist community of the Valley in particular. For me, it’s not the loss of a former employee or colleague but that of a real brother which can never be made good and there will be many in the Valley who would be feeling the same way. But along with heaping accolades, let’s also pledge to keep Tanveer’s memory alive by following his cherished ideals of truthful reporting and taking a principled stand even it was likely to invite the wrath of wrongdoers on both sides of the fence.

Tanveer, I will always miss you. May your soul rest in eternal peace.

(Author is Kashmir based journalist, political analysts and TV commentator)