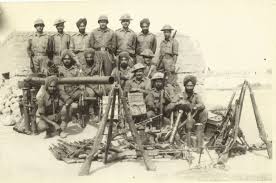 Fifty year back, in this time of the year, Pakistan made yet another attempt to wrest Kashmir from India. On August, 05, 1965, two young shepherds, Mohammad Din (In the vicinity of Gulmarg) and Wazir Mohommad (In the Mendhar sector) were approached by suspicious looking men in “Salwar Kameez’ and offered bribes for help and information. The patriotic Gujjar children promised help but ran back and immediately reported the matter to the police.

This came as the first indication to the Indian Forces about the Pakistani plan to infiltrate thousands of mercenaries into the Kashmir valley. This was Operation Gibraltar, Pakistan’s ambitious plan to grab the State of J&K by force.

Operation Gibralter was the brain child of Major General Akhtar Hussain Malik and the then Foreign Minister,  Zulfikar Ali Bhutto, who had sold the idea to the then dictator of the country, Field Marshal Ayub Khan over the head of General Musa Khan the Commander-in-Chief of the Pakistani Army who was not in favour of the misadventure.

The Pakistani intention stood fully corroborated on August, 08, when two Pakistani Officers, Captain Ghulam Hussain and Captain Mohd Sajjad, were arrested in Kashmir. Documentary evidence on their person revealed that a Mujahedeen force had been formally embodied for this purpose through a Presidential Ordinance in January 1965.

The infiltration plan had been prepared by Pakistan in a meticulous manner. Its objective was to orchestrate a local “Revolt” that would give an excuse for launch of conventional operations to “Liberate Kashmir.”

More than 4000 raiders were to infiltrate in small groups and converge into the valley from various directions. Once in the valley, they were to mingle with the thousands of people who would be congregating to celebrate the festival of Pir Dastagir Sahib on August, 08.

The next day the raiders were to form part of a procession scheduled to mark the first anniversary of the arrest of Sheikh Abdullah and stage an armed revolt. They were to capture the Srinagar radio station, the airfield and other vital installations. Other columns were to cut the roads leading to Srinagar.

This done, a “Revolutionary Council” was to be constituted that would claim itself to be the lawful government and appeal for assistance from other countries, read Pakistan. At this stage Pakistan was to launch its conventional operations and thus deliver the coup-de-grace to capture Kashmir.

The timely intelligence set into motion a series of counter measures by the Indian Army. The only troops readily available in the valley to counter this action were the Jammu and Kashmir Militia battalions. Two infantry battalions were rushed in as reinforcements. Intense and hectic combing operations were launched throughout the J&K Theatre. When columns came face to face the fighting was intense, bloody and merciless.

By August, 09, the situation was under control. Engagements reduced to minor skirmishes and the raiders were trying to flee back to the safety of their own country. Many were accosted near the cease fire line (Now called the line of control) and eliminated.

Subsequent intelligence reports confirmed that the raiders had been divided into six groups each having eight companies. These were grandiosely named Tariq, Kasim, Khalid, Salauddin, Babar, and Ghaznavi after the names of great Muslim conquerors.

The groups could not infiltrate in strength due to the timely intervention by the Indian forces. Those who had infiltrated suffered grave reverses when faced by the Indian onslaught. Tariq Force had to contend with an internal mutiny, Khalid Force ran out of rations. In a similar manner the other also got disintegrated.

In 1965, Pakistan had a slight edge in Armour, Artillery and Air capability. The leadership of the country was aware that India had launched a rapid expansion programme of her armed forces and that the edge that the Pakistan army had would fast get eroded. The time was viewed as the last chance to wrest Kashmir from India.

As usual, the highly subjective Pakistani leadership failed to factor in the Indian response.  As the war progressed on all fronts, India retaliated by capturing the Haji Pir Bulge, the main base for infiltration. Pakistan responded by a major attack in Chamb to cut the Indian jugular. This attack saw initial gains but soon lost momentum and Pakistan failed to capture the Akhnoor Bridge.

India retaliated with a massive attack across the International border that knocked the wind out of the Pakistani offensive in Akhnoor and forced it army to recoil. Pakistan’s First Armoured Division was trapped at Asal Uttar. Some 300 newly acquitted Patton Tanks of the Pakistan Army were destroyed.

Pakistan’s misadventure, thus, that fell on its face due to the courage and perseverance of the Indian soldier and the countrys dream to grab Kashmir, once again went up in smoke. Ceasefire was declared on 06, September, 1965, with Pakistan nursing a bloody nose.

Pakistan however, is not known to learn any lessons from history. Post 1965, yet another Pakistani dictator, General Zia-ul-Haq, conceptualised a policy of a thousand cuts.  The concept envisaged engagement of India through a proxy war by mercenaries posing as Mujahedeen.

The barbaric terrorism that Pakistan unleashed on Jammu and Kashmir was contained by the Indian Army with active support of the people. Today, terrorism is at an all time low but Pakistan has not given up on resurrecting the same. Constant cease fire violations along the line of control and desperate attempts to indoctrinate the local youth towards the path of insurgency are indicators of the country’s resolve to keep the pot boiling in Jammu and Kashmir

Pakistan has, by no means, given up on the dream of wresting Kashmir from India. Therefore, while remembering the courage and bravery of those who saved India from the malevolent designs of an evil enemy in 1965, the country needs to stay ever vigilant to face the threat that continues to loom like am long shadow.

(Dr. Simrit Kahlon is a Chandigarh based academician and defense expert)