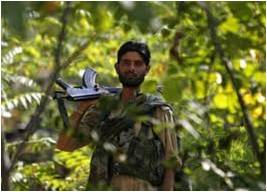 In recent times the Omar Abdulla government has come under immense political pressure over the rehabilitation policy for militants who crossed over to Pakistan Occupied Kashmir (POK) during the peak period of insurgency and are now desirous of leaving the path of violence to get back within the fold of their families. The opposition Peoples Democratic Party (PDP) has raised this issue on several occasions in the State Legislative Assembly and has accused the government of putting the matter in cold storage. In reply to a question on the subject raised in the Assembly by PDP member, Murtaza Khan, the government replied that 1034 applications have so far been received from youths who are willing to return from POK. “Out of these applications, 67 cases have been recommended and the decision is still awaited”, government responded further.

The issue is being raised by the PDP for political reasons. Yet, there is a need to realise that the entire initiative is extremely sensitive in nature and has the potential to adversely impact peace in the valley. It is therefore imperative that caution and patience be applied, especially so, by the leadership of the Valley.

A rehabilitation policy has its own set of merits and demerits. In actuality, a policy of this nature reflects the assent of the government and society to grant pardon to those fellow countrymen who have been misled by inimical forces, This is essentially a pardoning system – the state displays a willingness to forgive those who are ready to shun violence. On the surface, it sounds well but it can be exploited by shrewd elements to disturb the fragile peace in a post conflict scenario.

The rehabilitation policy designed by the Government of Jammu and Kashmir with the approval of the government at the centre is based on a conjecture that if a terrorist has said that he is ready to shun violence and wants to enter mainstream then his word should be taken on its face value. This is absurd. How can the government trust someone one who has lived in POK for such a long period of time, is a trained terrorist and may have been involved in violence against the state of India. These elements have lived in POK and raised families, surely they will harbour a certain degree of emotion for the environment that they have lived in for many decades. How can the government preclude the possibility of the policy being misused by terrorist leaders for inducting indoctrinated cadre into the Valley now that their conventional lines of infiltration across the line of control (LoC) stand inhibited? A terrorist who is on the other side of LoC, unable to infiltrate, can use this method to get into Kashmir. The whole expenditure of border management will be a waste if motivated terrorist can infiltrate into the valley legally.

Even if the State government wishes to follow the policy of pardon still certain precautions will have to be taken. The beneficiaries should be subject to the due process of law and given due punishment under law, if deemed necessary, before being integrated into society. This will ensure that their linkages with the terror network in Pakistan get diluted. In the next step, proper surveillance must be maintained to ensure that their integration into the main stream is well controlled. The State deserves to have some say in theprocess, when it is showing a big heart and forgiving militants.

Chief Minister Omar Abdullah has said to the media, “”Reality is that Cross LoC return and rehabilitation of Kashmiri youth is not the policy of one country. This rehabilitation policy does not suit our neighbouring country (Pakistan). It is possible that under such a situation they (Pakistan) will not only oppose it, they will also sabotage the project. We are trying to find various ways and means to bring back Kashmiri youths, who have gone cross LOC for militant training. As many as 67 (out of 1000) of them have been given final approval and their families have been informed. These families have stopped any further interaction with the youth sitting across the LoC. We have stuck to our plans to bring back and rehabilitate the Kashmiri youths who had taken up arms and the best possible efforts are being made in this regard.”

Omar Abdullah cannot be more politically correct than that. He has not committed any thing nor has he struck down anything. Unfortunately, this is the ground reality of the valley. Everyone wants to have their cake and eat it too. Every one in valley wants peace but none is ready to adopt due caution and take the desired action to ensure the same. What if these militant enter Kashmir and start propagating Jihad, first surreptitiously and then openly, to build up a situation akin to the 1980,s? In the last few years one has seen civil unrest erupting in Kashmir on very flimsy reasons and these battle hardened men can add fuel to the fire. They can also do the ground work towards initiating another round of indigenous terrorism and thereby give to Pakistan the political and strategic leverage that it is looking for.

All gains made over the last two decades will be lost, something that India and Kashmir cannot afford under any circumstances. The responsibility of the state is to ensure that the interest of the common man be protected. The interest of the common man in Kashmir, at present, is another peaceful summer which leads to a healthy tourist season. Another peaceful summer will erase out the stagnation in the economy and will create environment where the peace and stability will be self sustaining not enforced. This is what the government should be working towards instead of playing to the political gallery of a few elements who have a foreign backing.