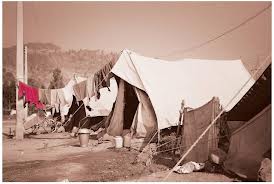 The issue of refugees in Jammu and Kashmir comes up for discussion every now and then; presently it is in the lime light in view of the mandate of the BJP government at the centre that calls for their rehabilitation with dignity. Since the matter is well entrenched in the political domain it will come up in the election campaign for the forthcoming State Assembly polls. It is, however, more important to reflect on the human dimension of the situation.

New Delhi, as also other metropolitan cities in Indian and across the world, has a large number of smart intelligent young Kashmir Pundit men and women pursuing successful careers. There is a small hitch in their otherwise invigorating existence – they have never visited their native place, Kashmir. Their grandparents were forced out of their ancestral land about three decades ago due to terrorist brutality; at that stage their parents were in their early twenties. Their parents left the refugee camps in Jammu and migrated to big cities to make a new life for themselves while the older generation stayed back in the hope that one day they would get back to their beloved homeland which, sadly, has not happened.

The young people struggled in pursuit of their careers; with time they settled into a new life, got married both inside and outside their communities and had children. Their progeny, now grown up, relates to a cosmopolitan existence and has only a passing knowledge of its ancestry

This columnist gets to meet many of these new generation Kashmir Pundits brought up in New Delhi. They speak perfect English and Hindi with no trace of the accent that is peculiar to the older Kashmiri generation; some speak Kashmiri, other can only understand the language. Only a few visit relatives in Jammu; most have not visited Kashmir in the two decades plus of their lives. It seems that memories are too painful for their parents to contemplate going to Kashmir even for a holiday. These young people have only heard stories of their homeland; they fail to relate due to lack of the physical feel and emotional bond. As a result, an entire civilisation is facing cultural extinction because of an internal displacement that has not been set right.

There is yet another category of persons belonging to Jammu and Kashmir who have been displaced due to the cult of terrorism. These are the Hindus belonging to the hill tracts south of the Pir Panjal mountain range. They were forced out from their villages by terrorists and now live in dilapidated camps in Jammu and Udhampur. Even though terrorism is now contained they are not being able to garner the courage to go back to their native villages. In their absence their lands have been forcibly occupied; many were intimidated into selling their land and have thus lost their roots all together. Unlike the upwardly mobile and educated Kashmiri Pundits these are poor, hardy, village people who do not have the capacity to build an alternate life so they continue to languish in the camps with no respite in sight.

In Jammu as one enters Ranbir Singh Pura there is a road that goes into an area called Simbal Camp. Though a part of the city Simbal camp has a rustic sheen around itself. The road is full of pot holes and in dire need of repair. Many built up brick houses between fields are semi complete, they have not been plastered from outside probably because the budget ran over. Life here is on the fringe, clearly passed over in the large scale development that the rest of Jammu city has witnessed over the years.

Simbal camp is the residence of mostly Sikhs and some Hindus who, during the holocaust of the partition, ran out from Muzaffarabad and other areas that now constitute Pakistan Occupied Kashmir (POK). When they vacated their homes to save themselves they were given no shelter in adjoining Kashmir valley; they came all the way down to Jammu and settled in this area which is ever since known as a “camp”.

Though state subjects by law their integration is society is still incomplete. In fact, their very status is ambiguous with definitions ranging from refugees to migrants to displaced persons. They did not get compensation for the properties lost in their ancestral homeland on the premise that they will get back the same when POK comes back to the Indian Union; precious little is being done by successive governments to convert this dream into a reality, in the interim, these people are being denied an honourable existence. They continue to feel insecure even sixty years after their initial dislocation.

The belt of villages from Kathua to Pallanwalla have yet another heartrending story to tell; in these villages reside a body of people whose elders moved with their families from Pakistan to the border villages in Jammu to escape the brutality of partition. Unlike the people who were dislocated from POK these people were not state subjects. Now six decades hence they continue to live without an identity having been denied the status of a state subject of Jammu and Kashmir; as a result they cannot own property in the state; cannot get government employment or even own a ration card. Quite naturally, they have no voting rights whatsoever. Three generations of these refugees have, therefore, been denied basic human rights like the right of citizenship, employment, education, ownership of property etc. What is even more distressing for them is that their brethren who went on to settle in other parts of India are bona-fide citizens of India and doing extremely well.

It is in the backdrop of this human aspect that the issue of refugees in Jammu and Kashmir should be considered. The matter needs to be viewed beyond politics. It is sad to see Political leaders giving vague election promises as will happen in the forthcoming elections also. Nothing can be done unless there is unanimity of thought in the political leadership and that is possible in the present as much as it would be possible after elections. The time has come for the leadership to rise above partisan interests and give back to these people the life and dignity that fate has wrested away from them. Surely this is not too much to ask for!