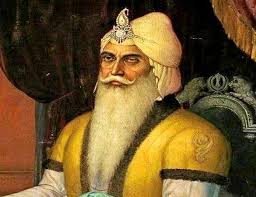 Maharaja Ranjit Singh, the most prominent Sikh ruler in history, was an exceptional human being who achieved great heights and glory. A true disciple of the Sikh faith, he fulfilled the ideological aspirations of his master, Guru Gobind Singh Ji, by breaking the barbaric stranglehold of the Afghans and the Mughals on the people of Punjab and creating a liberal and enlightened Empire of the Sikhs. He completed a task that took several centuries and sacrifice of countless members of his community to be accomplished.

Ranjit Singh was born on 13 November 1780 in the house of the great Sikh chieftain of the Sukerchakia Misl, Sardar Mahan Singh, to his wife Raj Kaur. A Misl in those days constituted a loose confederacy that ruled over a designated area in Punjab. At that stage there were twelve main Misls of which five were the most powerful; these were Sukerchakia, Kanhaiya, Nakai, Ramgarhia and Bhangi Misls.

The Sukerchakia Misl had been built to a strong and dominant position in Punjab politics of those days by its founder Sardar Charat Singh, the grandfather of Ranjit Singh and by Sardar Mahan Singh, the father of Ranjit Singh. The Misl controlled lands between River Ravi and River Chenab which now fall in Pakistan. The capital of the Misl was Gujranwala a strategic hub north of the Pakistani city of Lahore and the area from where the Afghan raiders came into Punjab. Lahore and Amritsar were with the more powerful Bhangi Misl and the area to the Eastin Majha (Fatehgarh Curian, Batala, Gurdaspur) was with the Kanhaiya Misl. Nakai suzerainty was to the south-west in the general area of Kasur. Ramgariah, Ahluwalia and Singpuria Misls were more into the Doaba region.

Ranjit Singh, whose birth name was Budh Singh, in his childhood, was afflicted with Chicken Pox that left him scarred and without one eye. The affliction neither reduced his confidence nor came in the way of his military training. The times were such that he did not get the luxury of a formal education, but he did learn the Gurmukhi script. He was, as such, adept in martial arts as well as reading of the Sikh scriptures. A born horseman and military strategist he fought his first battle alongside his father at the age of 10.

Mahan Singh was very close to the Kanahaiya Misl chiefs but a dispute arose over money matters. He aligned with the Ramgarhia Misl to destroy the Kanhaiya Misl and in the ensuing Battle of Batala in February 1785, the next in line of succession in the Kanhaiya Misl, Gurbaksh Singh Kanhaiya, was killed. Sada Kaur, the wife of Gurbaksh Singh took over the leadership of the Kanhaiya Misl. A brilliant strategist, she did not take long to realise the benefit in putting the old enmity with the Sukerchakia clan aside for the sake of garnering power and ensuring survival of her people. She met with Raj Kaur, the mother of Ranjit Singh in 1786 at Jwalamukhi and the two ladies decided upon marrying their respective children, Ranjit Singh and Mehtab Kaur (both below ten years of age at that time) to dispel the enmity.

The early indoctrination of Ranjit Singh into the affairs of the Misl paid good dividends since he was called upon to take the responsibility of a chieftain at a very young age. Sardar Mahan Singh died of dysentery in April 1790 and young Ranjit, barely ten years old, found himself anointed as chief of the Misl. The early days of his chieftainship were under the regency of his mother Raj Kaur and the able minister Dewan Lakhpat Rai. The marriage of Ranjit Singh and Mehtab Kaur took place in 1795, after which, his mother-in-law, Sada Kaur became one of his principle advisors.

In 1798, Ranjit Singh went into yet another strategic alliance through marriage with Raj Kaur (renamed Datar Kaur after marriage) daughter of Sardar Ran Singh Nakai, the chief of the Nakai Misl. She went on to become the mother to the heir apparent, Prince Kharak Singh, and was addressed a Maa Nakian. Allthrough her life, she remained a favourite of Ranjit Singh from among his 20 plus wives.

The territory of Sukerchakia Misl was the first to come in contact with an invasion coming from Afghanistan. Recognition as a warrior came the way of Ranjit Singh when he defeated the forces of the Afghan ruler, Shah Zaman, over two years in 1797 and 1798. Buoyed with this success and flush with the combined power of his own and the Kanhaiya Misl, Ranjit Singh annexed Lahore and drove out the Bhangi rulers in 1799. At that stage Ranjit Singh, by amalgamating the territories of the Sukerchakia, Bhangi and Kanahiya Misls controlled what is known as the Majha region, inclusive of areas that are now in Pakistan. Jammu ceded by default in 1800.

In 1801, Ranjit Singh, at the age of 21, proclaimed himself “Maharaja of Punjab.” He termed his rule as “Sarkar Khalsa” and stuck coins in the name of Guru Nanak. His anointment was done by Baba Sahib Singh Bedi – a descendant of Guru Nanak.

By then the Sikh Empire had already taken Kasur. Within a decade, Multan and Kashmir accepted Sikh suzerainty. The battles with the Afghans were many and ferocious, fought mostly by the able Generals of the Maharaja, Dewan Mokham Chand and Hari Singh Nalwa.

Absolute victory came the way of the Sikhs in November, 1819, when the Afghan ruler  Dost Mohammed accepted the sovereignty of the Maharaja over Peshawar along with a revenue payment of Rs one lakh a year.  The victories of Kashmir, Peshwar and Multan were celebrated by naming three newborns Princes after them. Prince Kashmira Singh, Peshaura Singh and Prince Multana Singh were born to Daya Kaur and Ratan Kaur, wives of Ranjit Singh.

The geographical reach of the Sikh Empire under Singh included all lands north of Sutlej river right up to Afghanistan. The major townships in his empire were Srinagar, Attock, Peshawar, Bannu, Rawalpindi, Jammu, Gujrat, Sialkot, Kangra, Amritsar, Lahore and Multan.

Maharajah Ranjit Singh was the first Asian ruler to modernise his army to European standards. His armies achieved great military feats and victories because of their training, discipline and professionalism and most of all,- unquestioned loyalty to the Maharaja. They were composed of soldiers and Generals of all communities (Sikhs, Hindus and Muslims) and were trained by European officers who had served with Napolean. Special training was imparted to Infantry and Artillery on their being equipped with modern Rifles and Guns.

Maharaja Ranjit Singh, though only informally educated himself, was very particular in running an efficient and well tuned administrative machinery. He was well known for filling the administrative positions with men of various religions selected purely on basis of their merit.  After carefully selecting his ministers he delegated responsibilities and then kept a close eye on affairs of state personally. The system of relying on verbal orders was replaced with proper documentation.

The Sarkar Khalsa established by Maharaja Ranjit Singh was one of the earliest examples of seamless secularism. The Maharajah never forced Sikhism on his subjects; he, in fact, showed tolerance and respect towards their religions and participated in their practices, and festivals. This was in sharp contrast with the attempted ethnic and religious cleansing of past Muslim rulers. As a result, the Muslims who formed a majority of his subjects, were intensely loyal to him. Thus, Ranjit Singh created a state based upon the noble tenets of the Sikh Gurus which enjoined people of diverse backgrounds to live together in peace and harmony.

While being a benevolent and liberal leader, Maharaja Ranjit Singh personally remained a devout Sikh. He was responsible for the Gold plating of Sri Harminder Sahib, in Amritsar. Being a devoted disciple of the tenth master of the Sikhs, Guru Gobind Singh, he built Takth Sri Patna Sahib, the birth place of the Guru and Takth Sri Hazur Sahib, where the Guru left his worldly body. Both the Gurudwaras’ are sacred for the Sikhs. He took upon himself the responsibility of construction and maintenance of many other Gurudwaras’ within Punjab and in other parts of the country. He is also said to have donated large sums of money for Hindu temples and other shrines.

Ranjit Singh was a great fearless warrior, able administrator, statesman and a noble King. He was a liberal ruler; despite being an absolute monarch he was democratic in his thought giving credence only to attributes of merit and loyalty. He dedicated his reign to the Khalsa and never wore a crown, his court was splendid and his jewels extraordinary but personally he liked to remain simply attired.

Maharaja Ranjit Singh is a towering figure in Indian history.  He epitomises all qualities espoused by his Gurus which also form the basis of enlightened Indian thought and philosophy.  He is a national icon and a role model in leadership, nobility, nationalism, tolerance, professional proficiency and other such qualities. There is every reason to be proud of this great son of India.

(Jaibans Singh is a reputed journalist, columnist and author)