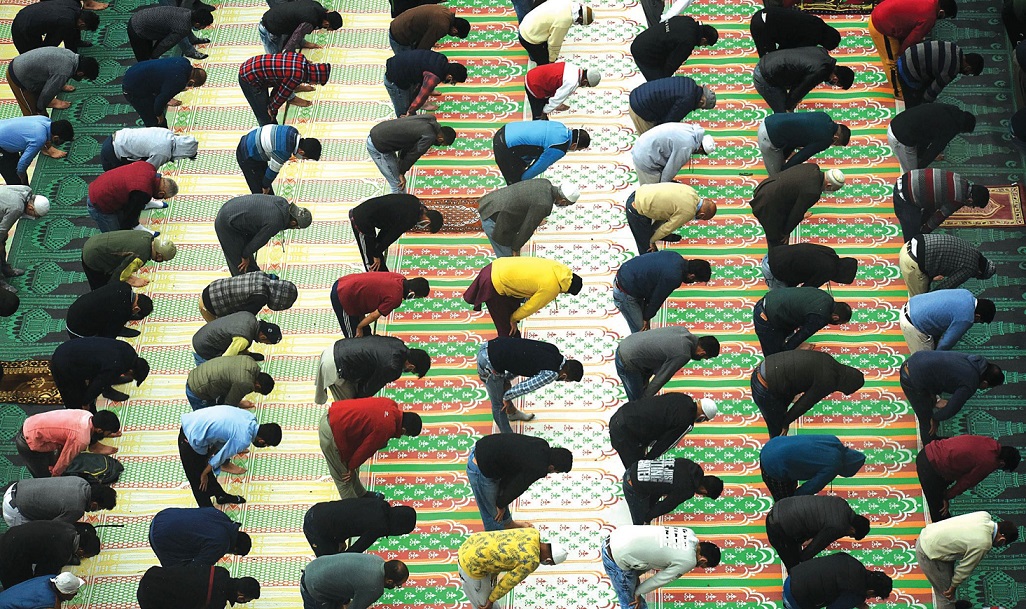 Ramzan is a sacred month when Muslims across the world observe fasts and other religious activities. The holy month is called “Ramadan” in Jammu and Kashmir and is observed with great reverence. This year the holy month of Ramadan has commenced on 14 April and will culminate with celebration of Eid-ul-Fitr  on 13 March.

Ramadan is not only about fasting. During this month, Muslims are decreed by Allah to emphasise on acts of “Deen” (religion) rather than worldly matters. it is also about being humble, modest and above all, free of all animosities; it is about discipline, self control, self reflection and reformation, a time when the believer ponders over spirituality and piety and brings about a change in his/her own self for the better.

Kashmir, with its unique Sufi culture has an evolved sense of spiritualism and religion; Kashmiriyat (intrinsic culture of Kashmir) with its tradition of religious amity plays a big role in giving a universal appeal to the holy month of Ramadan and the festival of Eid-ul-Fitr. It is the most significant time of the year for the Kashmiri people.

Sadly, on many earlier occasions the Ramadan and Eid celebrations have witnessed play of dirty politics and restrictions due to terrorist initiated violence. It was indeed very difficult for the people of Kashmir to come to terms with the cult of violence and hatred that remained characteristic in the month of Ramadan for the long period when terrorism was at its peak. Alongside, the open instigation towards protests and aggression during Ramadan by the political leadership, especially the constituents of the now redundant All Party Hurriyat Conference (APHC), caused great stress to the people since such  acts went against the spirit of the holy festival.

The Union Government has always attempted to ensure that the month of Ramadan passes peacefully and happily for the people. On many occasions the Government has offered a ceasefire during the month; the last such offer came in 2018  through the NDA II government. It was called “suspension of operations” and was done by the government unilaterally despite many voicing apprehensions that such a recourse would help terrorists recoup  at a time when they were on the back foot. The government, however, was determined to give to the people an opportunity to observe the holy month with peace.

Now the situation in the Valley has changed vastly and for the better. Terrorism has been contained to degree where socio-economic activity can be carried out undeterred. The Government has not felt the need to institute any more suspension of operations after 2018 since the security situation has remained conducive for the people to enjoy the festival. Also, the divisive and disruptive political leadership of the APHC and others has been exposed and marginalised.

Offering of Ramadan prayers at home

It was with great despondency that a decision was taken to disallow congregational prayers like Taraweeh due to the prevailing situation. It is to the credit of the people that they fully understood the need to exercise restraint, and as such, Ramadan was celebrated with fervour but without large gatherings in places like the famed Jama Masjid in Srinagar.

This year the evil masters of terrorism sitting across the border attempted to raise the threshold of violence in the valley in the  period before commencement of the month of Ramadan. In a very unfortunate incident on, 9 April, terrorists shot dead a Territorial Army (TA) soldier, Havaldar Mohammad Saleem Akhoon, near his home in Goriwan, Bijbehara. This brutal act was part of a well crafted policy of the terror masters to increase violent activity in the Kashmir Valley. By killing a soldier they aimed to instil fear in the minds of the locals and restrict their movement during Ramadan.

The response of the security forces was swift and relentless. Within two days of the murder of Havaldar Mohammad Saleem Akhoon, the two terrorists responsible for the dastardly act were killed. Apart from this encounter, 10 more terrorist were killed in separate encounters within 72 of the dastardly murder being committed. The terrorists got a loud and clear message that the security forces will not allow them to disrupt Ramadan festivities. There has been no terrorist initiated violence or encounters reported after these incidents. The security situation is conducive for safe and secure celebration of Ramadan in Kashmir.

Also this year, however, the shadow of increasing COVID is hovering over the whole of India and also upon Jammu and Kashmir.  In consideration of the deep religious sentiments of the people associated with Ramadan, it has been decided to avoid complete closure. On the eve of Ramadan, Shri P K Pole, Divisional Commissioner Kashmir clarified that there would be no bar on the religious gatherings in Kashmir and that night curfew would be imposed after Taraweeh prayers. “If the situation goes awry, then definitely the administration will take appropriate measures,” said the Divisional Commissioner.

Now, almost a week since the commencement of Ramadan, Taraweeh prayers continue to be held in Mosques but with strict adherence to the COVID-19 Standard Operating Procedures (SOPs). While offering the prayers, the devotees are leaving intermediate prayer mats empty as marked by the Mosque administration, thus ensuring social distancing.

It is heartening to see religious leaders motivating people to offer prayers at the individual level so that nobody is infected with COVID. It is also heartening to see the people strictly following social distance norms and other protocols during offering of prayers. If things carry on in this positive manner the holy month of Ramadan will witness a great celebration without any medical emergency erupting.

On this holy occasion, the best wishes of the Nation are with all Muslim brothers and sisters and especially those from Jammu and Kashmir who have suffered so much in the hands of terrorists and now deserve to celebrate their festivals with total peace and security.

(Dr. Simrit Kahlon is an academician, columnist and commentator)