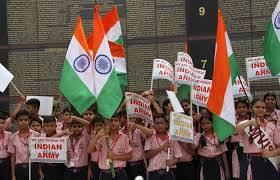 Jammu (Jammu and Kashmir), Sept. 7: The Jammu Citizen Forum in association with Team Jammu and other youth forums on Wednesday organised a massive ‘Tiranga Rally’ at M.A. Stadium to place on record the deep sense of gratitude and appreciation of the people of the Jammu province for the sterling contribution of valiant officers and Jawans of the Indian Army, CRPF, BSF or other paramilitary forces since the dawn of Independence in preserving and safeguarding the sovereignty and territorial integrity of India.

The rally, which comprised locals marching on foot as also on motorcycles holding national flags and placards in support of security forces, handed over a memorandum on behalf of the Jammu Province Civil Society to the Divisional Commissioner for onward submission to Chief of the Army Staff (COAS) General Dalbir Singh and forwarded copies of the memorandum to Defence Minister Manohar Parrikar and heads of all paramilitary forces.

In the memorandum, the Civil Society Jammu Province reiterated its full support to the army, the paramilitary forces and the Jammu and Kashmir Police in “crushing the monster of foreign sponsored terrorism”.

The memorandum was handed over to Divisional Commissioner by Mrigu Sanyal, a Class 9 girl at Heritage School. Sanyal had earlier won the first prize in ‘Proud of Indian Army’ declamation competition, where premier schools of Jammu and Kashmir had participated.

In the memo, they expressed their solidarity with the army, paramilitary forces and the police, with an assurance that “no power on the earth can break the unique and holy bond that exists between the two regions”.

The Civil Society’s initiative came at a time when the state is going through a turbulent phase with terrorism, aided, supported, funded and sponsored from across the border raising its ugly head in different manifestations, the memorandum noted.

When asked about Pakistan Army Chief Raheel Sharif seeking the enforcement of UN Resolution to resolve the Kashmir issue, Brig. (Retd) M.M. Chaudhary, who also participated in the rally, told ANI: “UN Resolution has become irrelevant in today’s context, because the first thing that was required to implement that resolution was for the Pakistanis to withdraw from the areas of the Jammu and Kashmir that they had occupied in 1948.”

“In the prevailing situation, the army is doing a delicate job with utmost restraint, because we don’t want our own people to suffer; whereas, if you remember, Raheel Sharif has been bombing the FATA with tanks, aircraft and drones, killing his own people,” he added.

Speaking about the motive behind the ‘Tiranga Rally’, Zorawar Singh Jamwal, a member of the Jammu Citizen Forum, said: “There is a simple thinking that the Jammu Citizen Forum, Team Jammu and other youth forces associated with us are taking out a ‘Mass Tiranga Rally’ in support of our security forces, whether they are army, CRPF, BSF or other paramilitary forces, who have made huge scarifies and laid down their lives for our security, for protecting our border, in fighting the militancy. We want to say “we are proud of our security forces”.

“The rally is also against the separatists and anti-national people, who are surviving on Indian bread, but talk about (favour) Pakistan. If we look at the expenses on the separatists’ security, we find that around Rs. 560 crores have been spent. Thus, we demand that the separatists be stripped off that security cover. Our security should be our own people, the Indians. Thus, the youth of Jammu have taken to the streets to express our solidarity with the security forces and to say we are proud of them,” he added.