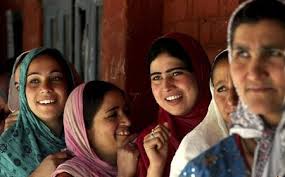 India, the largest democracy in the world, is gearing up for the 2014 Lok Sabha elections; a poll schedule of nine phases has been announced from April, 7 to May, 12 with the final counting on May, 16. Elections in India normally have an aura of festivity around them; lots of drums, banners, mudslinging, corny politics and fantastic promises mark the proceedings. This time round, the campaigning is particularly energetic and on some occasions, sadly acrimonious. The beauty is that, after all this, a government will invariably be elected and in case the ruling dispensation is defeated an extraordinarily smooth transition of power will take place. Such is the resilience of democracy in India.

In Jammu and Kashmir, especially in the Kashmir region, the drama that unfolds during elections has a twist to it because there exists, in this region, a determined inimical segment of leadership whose sole intention is to deny to the people the fruits of democracy, freedom and progress. In this evil design the segment has unrelenting support from inimical forces from across the border. In the present instance, elections in Jammu and Kashmir gain even more importance since they will be a precursor for the state legislative assembly elections to be held later in the year.

It may be recalled that the unprecedented success of elections held in the state in 2008 and 2009, despite strong resistance by a segment of the leadership, came as a complete surprise for political pundits and Kashmir watchers. The people exhibited a clear mandate for the democratic process and came out in large numbers to exercise their franchise. They did so with complete disregard to the calls for boycott, intimidation and threat to life. It is quite apparent that there is a big disconnect between the people of Kashmir and some of their so-called leaders.

The circumstances during the forthcoming polls are not likely to be different from what has been witnessed on earlier occasions. The separatists will give a boycott call with Syed Ali Shah Geelani in the forefront; others will be a step behind, testing the waters before taking the plunge. Further, separatist groups are bound to launch an anti-security forces campaign. Rumours of rigging through the use of government machinery will be spread with impunity; also, minor clashes with will be blown out of proportion.

Pakistan based anti-Kashmir terrorist organisations like the Lashkar-e-Toiba and Jaish-e-Mohammad are already making intensive plans to disrupt the poll process. Terrorist leaders like Hafiz Saeed and Maulana Masood Azar are already on the streets exhorting their cadre to put in all they have to “destroy India”. The increased activity will be aimed at boosting the sagging morale of the terrorist cadre operating in the valley. There will be an increase in infiltration attempts, activation of sleeper cells and the over ground worker (OGW) network, recruitment of local cadre, attempts to intimidate and subjugate the local population, Hawala transactions etc. This apart, a concerted drive will be launched to discredit the security forces with accusations of human rights violations, disruption of public demonstrations and stringent calls for demilitarisation. Terrorists will try to strike at the morale of the security forces and create a wedge between them and the government.

It is quite evident that elections in Jammu and Kashmir will have to be conducted with utmost caution, maturity and vigilance to counter the forces that are working towards their failure. The election commission will need to be bold and confident; small setbacks, in case they come by, should not be allowed to shake its resolve to go through the process in the manner prescribed. On earlier occasion the election commission has shown exemplary determination. If it could conduct election under the challenging circumstances post the Shri Amarnath agitations in 2008 surely the present circumstances should not pose an insurmountable problem; the idea is to remain stead fast despite all provocations.

The security forces have achieved complete domination of the counter terrorist environment, with militancy related incidents dropping by almost 70%. These gains will definitely give adequate confidence to the common man to come out and vote in large numbers. Beyond this, the traditional apolitical stand of the security forces will convince the people that they will be able to exercise their franchise in a free and fair manner.

Apart from enhancing its domination of the security environment the army should now work towards strengthening the already strong bond that it enjoys with the people. Also, the need for proactive operations and relentless vigilance on the line of control, the international border and the interiors cannot be over-emphasised. The security process should be carried out with the support and active participation of the people. Preparations have already started as has been confirmed by the senior officers of the Army, the police and the paramilitary forces, now the threshold should be increased in a tacit and low key manner.

Credible steps need to be taken to ensure that false propaganda is not allowed to gain footage. Media has a very important role to play in this regard; the misconceptions, rumours etc that inimical forces will try to spread as a part of their propaganda campaign can be effectively countered by the media by giving out the correct picture. By presenting the situation in the right perspective and in a timely manner the media can negate the forces aligned against the nation.

Political leaders should also restrain themselves from making sweeping statements that can harm the poll process. While campaigning hard for their candidature they have to ensure that nationalism stay in the forefront always and every time.

While there is no reason to be overly worried about conduct of polls in Jammu and Kashmir there is definitely a need to put in the extra effort that this sensitive region demands. Some caution, extra security vigilance, close contact with the people and responsible behaviour will ensure a resounding success.