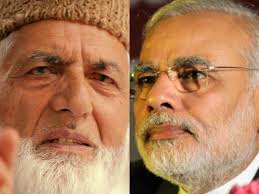 The state of Jammu and Kashmir and the Kashmir valley in particular have gone through a deluge of floods recently. The entire nation has empathised with the people in their hour of need. The feeling has translated into a massive effort to provide assistance to the afflicted people. There are innumerable non-government organisations charitable organisations, civil society groups etc actively participating in the rehabilitation process. Almost all political parties have volunteers in the valley to render whatever help is feasible. Media is covering all aspects to keep the nation informed and thus give an impetus to mobilisation of resources. Recently a charity show, Umeed-e-Kashmir, was organised to raise funds for the flood victims; film stars, big and small, came out in large numbers to be a part of the noble cause.

Has Kashmir ever responded with such zeal and passion towards areas of the nation that have witnessed affliction due to natural disasters? It does not seem so! In 2013 Uttrakhand faced large scale destruction due to floods; one has not come across an instance when a Kashmir based organisation came forward to assist the afflicted people. One has not heard of any such initiative from Kashmir in earlier disasters and calamities.

Many Kashmir based non-government organisations, charity institutions and civil society groups have the capacity to contribute during natural disasters. Political entities like the Hurriyat Conference can mobilise a lot of resources if they want to. The government of Jammu and Kashmir can also support others states as they are now supporting Kashmir. This columnist may stand corrected but not much activity in a humanitarian direction from Kashmir has been reported in the media. Is this not the reflection of an insensitive society or one that does not relate to its own fellow citizens?

Prime Minister Narendra Modi preferred to spend the auspicious day of Diwali with the people of Kashmir and the brave soldiers of the country who are serving in treacherous frontiers away from their families. These soldiers guard first the state of Jammu and Kashmir and then the rest of India. Prime Minsiter Modi’s visit to Kashmir was the second since calamity struck the region. He visited the first time in early September, within a few days of the deluge taking place. He declared the situation a national disaster and gave immediate relief of Rs 1000 crore from the centre. In his second visit he has promised an additional Rs 745 crore.

The concern that Prime Minister is showing for Kashmir and the generous relief packages that he is giving is worthy of the highest approbation. It reflects the inherent sensitivity and humanity of the Indian state. Unfortunately, there is no “feel good” vibration emanating from Kashmir with regard to his visit. The Kashmir media has termed it as politically motivated symbolism. Once again the negative brand of politics that signifies Kashmir is in the forefront.

Instead of being measured in terms of its humane element the visit of the Prime Minsiter has been spoken of in terms of the additional rehabilitation package of Rs 745 crore. Media went overboard in comparing it with the Rs 44,000 crore demanded by the state government.

Is the demand for a massive package of Rs 44,000 crore by the state government justified by any logical or economic parameter? One has never heard of such a massive demand in the multitude of natural disasters that have taken place across India since independence. If Kashmir is so rich that it can lose such a huge amount in a calamity restricted to a small portion of the state then why the constant demand for central assistance? Why are the people not paying taxes as due to them?

One can see “politics of aid” developing. The state government is well aware that the centre cannot meet this huge demand for rehabilitation, so whatever the government gives will fall short of expectation. The media being enamoured by Kashmir will highlight the discrepancy and the ruling political parties of the state will come across as a champions of the cause of the people. A perfect set up for the forthcoming elections.

In Kashmir urban areas were affected more by the deluge, no doubt the people have suffered heavily but they have resources and additional means to bounce back. The affected area south of the Pir Panjal (Poonch, Rajouri, Reasi etc) is predominantly rural. The people there have lost all that they possessed and have no additional means to recover from the loss except for assistance from the government. It is there that maximum attention of rehabilitation should be directed. In the mad rush for Kashmir, the loss suffered by these poor people is not being talked about at all, which is very unfortunate.

What is of prime importance at this stage is to overcome the tragedy with utmost honesty of purpose. The people of Jammu and Kashmir should courageously get down to rebuilding their lives themselves, they should look at the assistance being provided as force multipliers to their individual efforts. The people of India should assist in whatever manner they can and the help should be accepted with due grace; the state government should present an assessment that is logical and the same should be made public. Priority in disbursement of aid should be laid out and it should be ensured that the last penny reaches the concerned person in a timely manner. The media should assist by avoiding sensationalism and ensuring a correct, positive coverage

One does not mean to be callous; undoubtedly, the Kashmiri people have seen hard times in more ways than one. Terrorism, conflict, economic deprivation, uncertain education, natural disasters have taken their toll. However, for their own good they need to maintain a positive mindset and keep their sense of compassion alive. They should do unto other what they expect to be done to them. It is only with hard work that things will take a turn for the better. What needs to be avoided at all costs is a sullen, cynical approach where more energy is wasted on the blame game rather than work on ground.