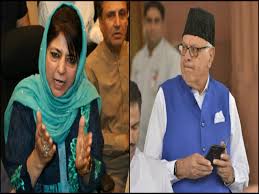 As the people of Jammu and Kashmir get on to vote for their representatives in the Parliament, it becomes relevant here to dwell on the report card of the esteemed Members of Parliament (MPs) of the state elected by the people in the 2014 elections.

Many of them have not completed their terms. Tariq Hamid Karra, MP from Srinagar constituency resigned in October 2016; Farooq Abdullah was elected in his place in April, 2017. Mehbooba Mufti, MP from Anantnag constituency, resigned in July 2016 and the seat has remained vacant ever since. Thupstan Chewang, MP from Ladakh resigned in December 2018.

Out of those who have completed their term, Musaffar Hussain Beig, MP from Baramullah has the most terrible performance record as provided by PRSIndia – his attendance stands at 11 percent, has participated in three debates, has asked 19 questions and initiated no private members bill. It is quite evident that he had no interest in representing his people in the highest seat of Indian democracy where they had sent him. Jugal Kishore Sharma, MP from Jammu and Dr. Jitendra Singh, MP from Udhampur constituency were the only two who remained regular. Of these, Dr. Jitendra Singh was a Cabinet Minister.

With such a miserable performance, the so-called mainstream local political parties of Kashmir should hide their faces in shame and not seek to represent their people in Parliament again. But, wonders of wonders, they have fielded candidates in all constituencies, some have even forged alliances. As the campaigning progresses, one tends to experience a sense of déjà vu. There is nothing happening in the electioneering that has not happened earlier. The candidates who have presented themselves for elections are more or less the same, they have been in this business for decades on end, in fact, for a life time and are not ready to make way for some fresh talent such is their thirst for power and money.  Some have changed parties and are parroting the political line of their new establishments with whom they were at loggerheads earlier.

The campaigning, especially so in the Kashmir Valley, is following the tried and tested path of castigating opponents and talking of contentious political issues. Those who have been parliamentarians umpteen times and are seeking election yet again are not listing out their achievements and how they will build upon the same; it is so because they have nothing to show as performance and have no option but to skirt the issue.

There is no attempt being made to bring about a feeling of positivity by giving assurances of an improvement in the quality of life of the people with better security and economic stability. The narrative, instead, is designed to put an element of fear in the minds of the people by creating an impression that the candidate and his party are saviours of the people. This is a reprehensible falsity but, sadly, democracy does not provide any means to check the same.

The end result of this confrontational path being adopted by Kashmiri leaders of all parties has a sinister connotation. Passions are being raised with no thought to the end result. A societal rift is being created among the people who are already suffering a grave sense of insecurity and alienation. By the time this psychological campaign culminates the fault lines will be more embedded than before. The politicians will get what they want but the people will be left floundering.

Can somebody kindly remind the so-called tallest leaders of the Kashmiri people that their people are suffering in the hands of a foreign driven radial ideology boosted by cross border terrorism and, under the circumstances, their primary duty is to remove the disaffection among their youth which is guiding them towards a self destructive path of violence.

Experts the world over are identifying erosion of cultural values; radicalisation and the lack of parental control over the current young generation as reasons for the existing environment of political instability in Kashmir. The political leadership knows this well but it is refusing to take the opportunity presented by the elections to address of the core issues? Leaders are, in fact, fuelling the fire by making wild statements with open threats of leading a revolution to separate the Kashmir Valley from the Indian Union. With huge properties outside the state and children settled across the world they have nothing to lose, but what of the people who have to live where they were born? Can they survive outside of the Indian Union? Is any thought being given to the future of their children?

Here is one good example of the duplicity and double speak of these so-called leaders. The Armed Forces Special Powers Act (AFSPA) provides protection to the soldier involved in ensuring peace in the region and protecting the people from the evil foreign sponsored terrorism. Politicians in Kashmir, regardless of the party they represent, are known to make loud demands for abrogation or dilution of AFSPA when they get into election campaign mode. The same is the case this time too. They conveniently forget that the very election rally that they are addressing has been facilitated by a meticulously established security cover provided by the very soldiers whom they are hounding in their jaundiced speeches. Once campaigning ends, all talk of abrogating AFSPA also ends so far as the politicians are concerned, what remains is an element of doubt, however small, in the minds of some innocent common men and women that AFSPA is actually the reason behind all their problems and not lack of education, infrastructure, jobs, skill development etc. that these politicians are responsible to provide.

All the Jihadis and foreign sponsored fundamentalist elements joined together would not have been able to damage the psyche of the Kashmir people so much as the so-called candidates standing for elections will in a short period of a month plus. These elements and their self serving nefarious designs stand exposed. The people of Kashmir deserve better than this.