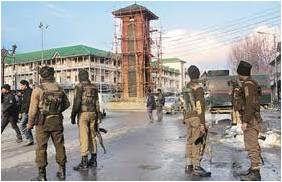 The government of Jammu and Kashmir has been quick to shoot down a request by the Central Reserve Police Force (CRPF) to move out two of its battalions, amounting to 2000 troops, from the State. “We have written to the Jammu and Kashmir government requesting them to relieve the two battalions, but they are not willing to let them go. They say security will be compromised if the forces are sent back,” said a senior CRPF officer. “We had received a request from the CRPF that they wanted to remove two battalions from the Valley for Naxal affected areas in Chhattisgarh. But after considering all aspects of security, we rejected their request,” said a top official of the government of Jammu and Kashmir. BR Sharma, Principal Secretary (Home) in the Government of J&K has further added, “We will discuss the issue with the Ministry of Home Affairs and then take a decision.” The fact that the State government is ready to take the issue right up to the Union Home Minister indicates that it will leave no stone unturned to retain the troops within the Valley such is the need that it feels for retention of the force.

Even as the principal secretary was preparing his case for retention of troops in the Kashmir valley, his Chief Minister was busy pursuing his all time favourite demand for thinning down of the security umbrella in the State. During his speech on an occasion as important as Independence Day, Omar Abdullah considered it befitting to refer to his demand for revocation of the Armed Forces Special Powers Act (AFSPA) from the State. He expressed the hope that this would happen during his tenure. “I regret to say pace of the dialogue is very slow. Recently, I discussed the matter with the Defence Minister and the top brass of Indian Army. The issue is alive, but the pace is slow,” he said at the Bakshi stadium in Srinagar. As if this was not enough, on August, 28, almost contiguous to the categorical rejection by his Principal Secretary (Home) for move out of CRPF troops from the state, Omar reiterated his posture on the subject of AFSPA at a public rally in Rajpora, District Pulwama. “The state would witness revocation of AFSPA during my government’s tenure and the benefits of peace would percolate all across,” he said, as quoted by some newspapers. Is one to understand from his statement that it is AFSPA which is coming in the way of percolation of benefits of peace to the common man? One has always had reason to believe that peace in the valley is an offshoot of the relentless efforts of security forces over with active support of the people and under the legal protection provided by AFSPA. In case the Chief Minister thinks otherwise he should explain his reasons for the same and elaborate his views on the relationship between “benefits of peace” and AFSPA.

The aforementioned proceedings compel raising of a moot question – which of the two diagrammatically opposing contentions of the government is right; revocation of AFSPA and thinning of troops as is being demanded by the Chief Minister in person or retention of troops as is being most energetically pursued by the home department of the government of J&K? Now, with pressure mounting one would really not like to have the Chief Minister coming on air or twitter to say that his home department had erred in its assessment and there is no objection to removal of troops. What the Nation would now be looking for is facts to support arguments and no indulgence in fatuous politics. In case the Home Ministry of the State has got its facts wrong then two battalions of the CRPF sould be de-inducted forthwith; no politics, only action.

At present, 52 battalions of the CRPF are deployed across the Valley, and 26 of these are posted in Srinagar, Budgam and Ganderbal districts. These troops are mainly assisting JK Police in law and order duties related to riot control during the hartals, bandhs and stone pelting that regularly take place in the Kashmir Valley. The spirited case being put forth by the government of Jammu and Kashmir to retain the entire strength of the force deployed in Kashmir indicates two things. First, the government, despite two consecutive peaceful summers is yet not sure that peace has come to stay in the Valley, there is still an apprehension that things can go wrong and that too in a jiffy. Second, the JK Police is yet not fit and capable of taking over all law and order duties since it lacks in manpower, training, weapons and above all the motivation to go it alone.

In consideration of the arguments put forth above, It would not be too impertinent to suggest that the political leadership of Jammu and Kashmir is playing a double game? The political leadership is quite certain that the centre will not agree to troop reduction, so is it deriving political mileage from the situation? Is the demand for revocation of AFSPA and withdrawal of forces nothing more than politics? After all even a novice can understand that two peaceful tourist seasons are not reason enough to declare that the situation has improved enough to bring about changes in the security paradigm as is being suggested by the Chief Minister. A host of parameters and data have to be considered while reaching to a significant conclusion of this nature. It seems that security is being subject to politics; this is a lethal preoccupation which must cease forthwith. It is time for the State government to come out clean on its security policy and give a comprehensive security plan to be applied in the event of enabling legislations being modified or the security paradigm being changed.