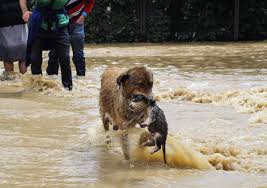 Everything incident in Kashmir, big or small, has the potential of getting politicised; it was expected that political games will be played out on the flood tragedy also. That they would begin so early even as the relief process is underway came as a surprise. This, unfortunately, indicates the slavish compulsion of a particular segment in the State that is left with no option but to obey foreign diktats regardless of their indecent and inhumane nature.

Certain voices are castigating the media with a ridiculous insinuation of having carried out a “PR exercise” in favour of the army. Such misinformation and rumour mongering deserves the strongest censure.   It has been universally acknowledged that the Indian armed forces put in a herculean effort to control and contain the critical situation created by the floods. Is this the first time that the armed forces have put in an effort of this nature? The answer is – No!! The armed forces have been forthcoming in all instances of disaster that the nation has faced since independence. Is the relief effort a vested interest to “Win the hearts and minds of the people of Kashmir” as is being insinuated? The answer again is – No!! The assistance was a spontaneous, natural reaction to save fellow citizens, human beings and animals from an adverse situation. In the past the armed forces have had ample opportunity to  “win hearts and minds of the people of Kashmir” when they assisted during the earthquake of 2005; the cloud burst in Leh in 2010 and the numerous occasion when the valley has been cut off due to heavy snowfall, landslides etc?

Assistance in times of natural calamities is not extended by the armed force for the sake of photo opportunities. The army has the wherewithal and the experience to meet such emergencies and it does so as a part of its responsibility towards the nation.

Disaster management is not the sole prerogative of the armed forces and they do not deem it to be so. It is a collective national effort in which the people play a dominant role. In every instance of disaster civilians in the vicinity do come out in large numbers to assist as was the case in Kashmir also.  This apart, a lot many government agencies get involved in the process. In Kashmir, particularly, the National Disaster Relief Force (NDRF) played a crucial role as did the paramilitary forces and the JK Police. We should not lose sight of the fact that the infrastructure of the state government was also enveloped in the disaster, under the circumstances it could not be expected to function at full steam. Even so, whatever the state government could do it did, Chief Minister Omar Abdullah personally put in an appreciable effort.

It is a fact that the armed forces take centre stage in the media coverage of a disaster.  This is not because of a “PR effort” as is being insinuated. The army is normally responsible for coordinating the rescue and relief operation. Naturally all information is available with the armed forces and it is there that the media congregates. Since there is a requirement to keep the nation informed the armed forces assist in dissemination of information. To insinuate that the forces use such circumstances for a “PR exercise’ is quite shameful and denigrating.

As time passes the quantum of the civilian assistance increases as more and more people and organisations join the process. For a long time after the flood fury had ceased in the Uttrakhand disaster in 2013, Non-Government Organisations (NGO’s) and charitable organisations sent relief material to the camps of the armed forces for further distribution. A similar method was followed also after the devastating earthquake in Kashmir in 2005. This is normal process of disaster management; that it is happening in Kashmir should not be looked upon as something unusual.

Civilian involvement in Kashmir is already gaining momentum. Take the instance of the “Kar Seva” from Harmandir Sahib in Amrritsar that has been running a Langar (Free Kitchen) in Kashmir since many days, the noble initiative has been covered by the media as have been stories of individual courage. In fact, now that the initial impact is over and the situation is slowly getting under control the armed forces have silently gone into the background and other civilian and government agencies have taken the front seat. This is something that the vested interests in Kashmir have neither noticed nor written about.

There is also talk of media silence over apathy and lack of response of the state government; this is not the time to raise such issues, the matter will come up for debate and discussion in due course, the weakness in response to the holocaust and the man made reasons for the same will definitely be discussed in detail and corrective action will be instituted. This is a matter of national concern and is bound to be addressed in due time. There is no point in jumping the gun.

Natural disasters are not circumstances where anybody is looking for personal glory, least of all the armed forces. These are times when each and every person is expected to put in whatever effort he/she can. Those who make derogatory and negative statements under such circumstances are looked upon with considerable abhorrence; as is happening in the Kashmir valley.

Once the process of rehabilitation starts more ammunition will come in the hands of the separatist and divisive elements to attack the government with. This will also be the best time for the government to redeem itself. If the local authorities can conduct rehabilitation in an efficient, honest and transparent manner; if the rebuilding is done in a manner that brings in modernity and precludes the possibility of a similar disaster in the future, then a lot of lost ground will be reclaimed. It is now up to the Omar Abdullah government to rise and be counted.