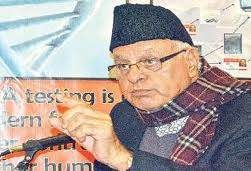 “This again calls into question the entire debate of Armed Forces Special Powers Act (AFSPA) and the way in which it is implemented or the way it is used,” said Omar Abdullah, Chief Minister of Jammu and Kashmir while referring to the Pathribal operation case, which is presently being heard in the country’s Supreme Court. National Conference President Farooq Abdullah, during whose tenure as Chief Minister this incident took place, states his position as follows “.”Yes, it was a fake encounter… All those who are responsible for having killed innocent people must be charge sheeted, whether they are in the Army or they are civilians …..”

It is quite obvious that an attempt is being made to fire the gun from the shoulder of the Supreme Court for political reasons with complete disregard to the fact that the case being sub-judice cannot be commented upon by involved parties. One wonders whether this is being done to influence the proceedings of the Court or to gain political mileage.

“It was a fake encounter with a motive…it can’t be termed as discharge of duty by the army and these army officials should not be protected by AFSPA,” says senior advocate Ashok Bhan while appearing for the CBI. First and foremost, one wonders at the motive of the CBI in appointing a Kashmiri Pundit as their senior counsel in the case. The country offers many others who have the requisite talent, expertise and legal reputation for this job, why than has this particular counsel been chosen? Is it because some lobbies in Kashmir which wish to remain outside the ambit of the proceedings can influence a resident of the State towards being more considerate to their requirements? Why is the learned counsel so insistent in naming only Indian Army personnel as perpetrators of the purported crime when irrefutable evidence has established that the joint operation was undertaken by the Army after receipt of specific information from the Police; a Police party accompanied the Army patrol and pointed out the house where the terrorists were hiding after which the attack was launched and the terrorists killed. The JK Police was quite forthcoming in taking the credit till such time that reports of civilians having been abducted and killed came up. It then staged the proverbial disappearing act and left the Army to face the flak. Why is a sustained effort being made to put this evidence under the carpet? Secondly, how is it that the fudging of the DNA samples is not being referred to by the CBI in its case at all? Once again, there is enough evidence to substantiate that it was the ineptitude of the Farooq government which led to the initial fudging of the DNA samples of those killed in the encounter. Not much is known about the report of the second sample that was taken after a protracted public outcry. The Army had no means of influencing the fudging of DNA samples, therefore, it can be logically deduced that the attempt was made by such local lobbies who wanted to hide certain facts.

As a matter of fact, one wonders as to why the CBI had to approach the Court at all for taking sanction to prosecute those who it believes were involved in a “fake encounter”? All parties in the case are government servants, some working for the centre, others for the State. Surely, the matter could and should have been resolved departmentally. The CBI merely had to place its findings before the government which had appointed it to conduct the investigations and then left the course of action to the higher authorities within the government. Where was the reason for it to get proactive and go out knocking the doors of the judiciary?

During the hearing on March, 26, 2012, the Centre told the Supreme Court that it needs four months to decide on sanction for producing the army officials charged. The Centre has also committed that it would pass appropriate and judicious order on sanction for prosecution of eight army personnel involved in the case. One can only hope that the “appropriateness and judiciousness” will include taking a holistic view of the entire episode as also the evidence which is in the public domain.

During the April, 02, 2012, hearing of the same case the Supreme Court has directed the Centre to lay out facts about the number of times a sanction for prosecution has been given in cases where immunity to Army under Section 6 of the Armed Forces Special Powers Act (AFSPA), had been “misused”. The Army has been expeditious in dispensing punishment, under the Army Act, to all those who have been found to be guilty of human rights violations while serving under protection of the AFSPA. During the last two decades —– numbers of Army personnel have been prosecuted and punished for various human rights violations in Jammu and Kashmir. Interestingly, not many such cases of punishment to Police personnel are available in the public domain. When any such incident involving the Police takes place, the person is suspended and an enquiry is instituted. Beyond that the notoriety of the Jammu and Kashmir government in putting enquiries under the carpet invariably takes over and nothing is heard of the case ever again.

No one can question the probity of the country’s apex Court in ensuring that justice is dispensed in all cases that come under its purview. It is politicisation of the Pathribal case and its motivated presentation to the apex Court which is giving a reason for concern. Let the law take its course, but the facts laid out before the Court need to be absolutely correct, especially so, when a government body has been entrusted with the responsibility to present them.