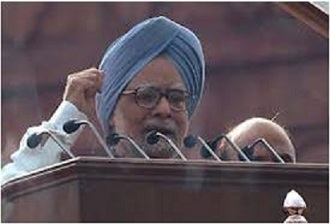 India celebrated 65 years of Independence on August, 15, 2012, with an address to the nation by the Prime Minister from the ramparts of the Red Fort in New Delhi as was done by the first Prime Minister Jawahar Nehru on the eve of Independence. An evening earlier President Pranab Mukherjee also gave a message to the Nation which was telecast live.

The Prime Minister started his 35 paragraph speech with perfunctory introduction to the history of the nation and reference only to one national icon, Jawaharlal Nehru. Then he embarked on an exposition of the Indian economy which would have been more relevant in an academic lecture to students reading economic honours. He was more interested in listing out the projects that his government had launched. Considering the state of our economy and general disaffection, his long diatribe would have caused more distress rather than uplifting spirits

For the country’s armed forces the Prime Minister said, “I would like to emphasise here that our armed forces and paramilitary forces have defended the security of our country both during war and peace with valour and honour. Our soldiers have made the biggest of sacrifices, whenever needed. Today I would like to reassure our countrymen that our armed forces and paramilitary forces are prepared to face any challenge….. Today, I would like to thank our security forces, who are guarding our frontiers bravely, from the bottom of my heart. We will continue to make efforts for their welfare.” Profound and very original pearls of wisdom one would say. The Prime Minister spoke of a committee set up to examine issues related to pay and pension of the armed forces personnel; he however failed to mention that request of the armed forces to include their representative in the committee had not been agreed to by the government. There is a widespread feeling amongst the community of soldiers in the country that the recommendations of the committee will fall grossly short of the requirement, such is the level of distrust between the government and the security establishment. On the all important subject of national security, the Prime Minsiter could spare only one paragraph for Jammu and Kashmir and the Naxal hit regions. For Assam, where the very integration of the Nation is at risk, he was kind enough to devote one paragraph.

Pranab Mukherjee, the newly appointed President of India and supreme commander of the country’s armed forces, in his first Independence Day message, found it prudent to devote only four lines to the armed forces in Paragraph 20 of his 21 Para address. “I am proud of our brave armed forces and our valiant police forces who have done so much, at such great personal risk, to curb this menace of terrorism… If we sleep in peace it is because they are awake and vigilant…….. I salute their commitment and their patriotism,” he said. Significantly, most of his speech (11 paragraphs) was also dedicated to bailing out the economic policies of the government in what looked like an attempt to present his own report card.

Let us see how America looks at security and its soldiers. In his inaugural speech on January, 20, 2009, President Barak Obama spoke about US security concerns in the very first paragraph, “That we are in the midst of crisis is now well understood. Our nation is at war, against a far-reaching network of violence and hatred.” As his speech went on he spoke of disengagement in Iraq and Afghanistan, lessening of the nuclear threat, terror and a number of other security related issues.

On July, 04, the US Independence Day, Barak Obama kicked off the celebration by inviting military service members for a reception in the south lawns of the White House. He met each of the brave invitees personally and paid tribute by saying that they “represent what is best in America.” “So as your commander-in-chief — but also as an American — I want to invite all of you over to say one thing: Thank you,” he added. Unlike the India President he does not seem to be shy of performing, to the hilt, his duty as Commander-in-Chief of the US Armed Forces.

The aforementioned adequately highlights the disinterest in national security that has enveloped our political leadership. They have become so engrossed in routine problems that they have no time for this most critical and overreaching responsibility vested upon them. The Prime Minister has nothing to say about the grave challenges that the Nation is facing along the borders and in insurgency afflicted areas, this in contrast with the US President who openly admits that his nation is in a state of war. Why cannot the Indian leadership have a similar take on Pakistan sponsored terror on our soil, if that is not war than what is? The President of India does not feel anything wrong in resorting to inane communication to the armed forces at a time when there are simmers of discontent in the soldering fraternity, both serving and retired, due to the apathy of an insensitive government. He could have well used this occasion to apply a soothing balm over frayed nerves of the forces, this a very much a part of his duty as supreme commander of the armed forces.

There seems to be a total disconnect between the leadership and the security forces. In case the divide is not addressed in an appropriate and timely manner it may precipitate to unacceptable levels with terrible implications on national security. Simply because the latter do not form a viable political constituency they cannot be given shoddy treatment. It is time for the political leadership to realise that empty words will not suffice; they need to bridge the burgeoning gap and rebuild trust. This is one area where our leadership needs to take a leaf from the United States of America.