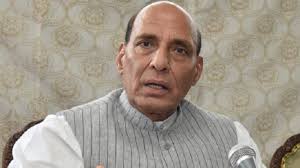 Home Minister Rajnath Singh visited Kashmir on June, 7, with the stated objective of reviewing the situation in the wake of the unilateral suspension of operations implemented by the government during the holy month of Ramadan.

“Even as we see the ceasefire bringing great relief to the people of J&K, militants seem to be continuing their violent activities and desperately trying to sabotage the process. I only hope that they realise the futility of their actions soon,” stated Chief Minister Mehbooba Mufti as a preamble to the meeting with the Home Minister.

It became quite apparent from her statement that she would root for an extension of the ceasefire and a general amnesty for the youth indulging in stone pelting and other such criminal activities, in order to give them an opportunity to “realise their mistake.”A rather dangerous experiment one would say!

On June, 8, the Home Minister promised to change the face (Tasveer) and the destiny (Taqdeer) of Kashmir. He gave an indication that the Union government is ready to pursue the “policy of appeasement” being advocated by its principal coalition partner in the state. He reiterated that cases against those misled into stone pelting will be withdrawn. It can be taken for granted that the suspension of operations (ceasefire) will also be extended in due course.

The Home Minister has also repeated the offer for talks; he has, in fact, expanded the scope by saying that the government is ready to talk to all “right minded people” who may not be necessarily “like minded.” The message is that those with differing opinions are also welcome to come forward for a dialogue.

The Union government, it seems, is determined to pursue the policy of appeasement despite recommendations to the contrary by many experts, political leaders and intellectuals.

Let us see what all can go wrong with this policy! Those who are directing the youth towards the path of stone pelting and terrorism can now use the soft approach as a propaganda tool to emphasise that the government is on the back foot. This could lead to more youth being motivated towards joining the ranks of terrorism. The stone pelting mobs can become more violent and rabid due to the protection that has been provided to them. Already there are many videos in social media showing open confrontation of these pelters with the security forces and the latter being harassed terribly.The Hurriyat can, and most likely will, use the dialogue option to boost its sagging relevance and then reject the process leaving the government with egg on its face.

The issue at hand is the extent to which the government is ready to pursue this policy and what is the “Plan B” should it fall flat on its face.

Logically the Plan-B would entail going back to active counter-terrorism operations and using a heavy hand on those creating disruption and divisiveness. The moot point here is that by the time the Plan-B is put in place the gains of the intensive counter terrorism operations carried out over the last year and a half would have nullified. It will be back to square one. Security forces will suffer more casualties and the common man will face more difficulty.

It is here that the involvement of the biggest stake holder in the future of Kashmir, the Indian Army, comes up for discussion. Does the government realise that the army loses precious lives due to implementation of policies that are operationally not sound? What strikes as rather odd is the fact that the Defence Minister whose ministry has the largest security stake in Jammu and Kashmir has nothing to say about the initiative. She has not visited the Valley or spoken to the troops including senior commanders on ground to get a hands-on feedback.This when a lot of defence experts have voiced apprehensions about the initiative.

The interest of the nation would have been served better if the government had adopted a righteous approach based on principles of justice and fair play.

One set of stone pelters has already been given amnesty. The same could have been invoked as an expression of the good intentions of the government with a message of “this much and no more.” The government could have extended its full support for all initiatives by the civil society to wean away the youth from the path of terrorism and violence while making it very clear that those indulging in such activity will have to face the consequences.

Chief Minister Mehbooba Mufti has spoken voraciously about the Ramadan ceasefire having given relief to the people. As chief minister what is more important for her – temporary relief of the people or their life and security?She should realise more than anybody else that giving respite to terrorists who, she herself admits, are not ready to relent from the path of violence, will be operationally suicidal.

The radical forces and enemies of the nation are unlikely to appreciate the good intentions of the government, they will instead look at the situation as an opportunity to further their evil designs.

Having taken a decision that, many feel, has got elements of backfiring, the Union Government now needs to remain very vigilant in its monitoring. It needs to be understood that it has the potential of leading to a situation that was obtainable in 1980s when a very heavy onslaught of terrorism took the region into a vice like grip.

(Jaibans Singh is a reputed defence and security expert)