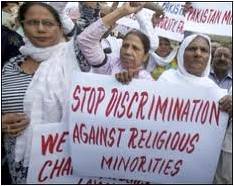 At the time of partition, the vision of the creator of Pakistan, Muhammad Ali Jinnah, was of a nation that would adopt secularism to accommodate its historically multi-religious and culturally diverse population. The Hindu and Sikh families that chose to stay back were assured of security and basic rights equal to those of the majority community. Sadly, what has happened is in total variance to the vision. Today, the very existence of these communities is under threat in Pakistan.

It seems that Pakistan is determined to exist as an Islamic State comprising only of Sunni Muslims. The unwritten policy to attain this objective is based on five prongs. First, exterminate the minorities through terror attacks and pogroms. Second, allow terror to sink in enough to cause a general exodus, mainly towards India. Third, convert and marry the female population of the minorities into the Muslim fold. Fourth, impose stringent laws that force the weak minded to convert voluntarily. Fifth, make sure that the government and other institutions make the right noises about protection of minority rights that helps keep international scrutiny at bay. With these prongs in place Pakistan has been carrying out the most insidious ethnic cleansing over the last six decades right under the eyes of the world.

At the time of partition, Pakistan had 11 to 12 percent Hindu/Sikh population. When considered in terms of the existing population levels of the country, the present strength of the Hindu/Sikh community should be around one crore fifty lakhs; on ground it is a miniscule thirty lakhs which is barely 1.5 percent of the population. One crore thirty lakh people have vanished in thin air. According to the Pakistan Hindu Council, about 20 cases of kidnapping of Hindu girls above 15 years of age are reported every month in Karachi alone. If the families of such girls approach the courts, hundreds of people gather outside and shout “Allah-o-Akbar”; even the judges get intimidated.

It is being said that millions of Hindus/Sikhs were killed by the Pakistan army in the early 1970’s when tension between India and Pakistan was at a peak. The Enemy Property Act of Pakistan 1965, legitimised confiscation of the property of Hindus and Sikhs including their homes and temples. The Islamic law implemented by Zia-ul-Haq in 1977 sealed the fate of the minorities by tacitly excluding them from constitutional and legal systems of the country. Hindus cannot get jobs, Hindu women cannot wear their “Bindi or Mangal Sutra” and dress according to Hindu tradition; the list of insults and persecution is endless.

In August 2012, Rimsha Masih, a Pakistani Christian girl was arrested under the infamous Blasphemy Law on allegations of having desecrated the Holy Quran. Despite scant evidence and with utter disregard to her being an eleven years old minor, suffering from Down syndrome, she was incarcerated in jail for three weeks. On being freed, she and her family had to go into hiding to avoid the ire of the fundamentalists. Finally, the family has moved to Canada in June this year.

The recent suicide bombing at all Saints Church in Peshawar that left 80 dead and about 100 wounded has put paid to any spirit of nationalism that the Christian community ever harboured in Pakistan; no amount of explanation about the attack being the handiwork of terrorists can help regain the trust of the isolated community.

Faced with such terrible conditions the aforementioned communities are making a beeline for India. The most horrifying characteristic of this exodus is that Pakistan is covertly facilitating the same. There are reports to suggest that certain out posts in the Pakistani side of the India-Pakistan border, especially so in the Rajasthan sector, have deliberately been kept vacant to facilitate the movement of the Pakistani Hindus, Sikhs and Christians into India.

Muslims of sects other than the predominant Sunnis are being blatantly persecuted. Sections 298-B and 298-C of the Pakistan Panel Code outlaws Ahmadis from calling their place of worship a Masjid, claiming to be Muslims or preaching their faith to others. A month back, in September, 2013, the Sialkot police tore down the minarets of an Amadi place of worship simply because a fundamentalist cleric gave a call that the building resembled a Mosque. During Eid al-Adha on October, 16, 2013, Ahmadis in Lahore were stopped from offering Qurbani (sacrifice). As a community, Ahmadis are blatantly being denied their religious identity in Pakistan.

Pakistan is home to about six lakh Shiite Hazara Muslims mainly in Quetta, Balochistan. This hapless community is being specifically targeted by al Qaeda associated terrorist groups like Lashkar-e-Jhangvi and Sipah-e-Sabah, as a continuation to their persecution and ethnic cleansing in Afghanistan. To quote a sad incident, an attack on the Imam Bargah, a place of worship of the Hazara’s in Aliabad area of Quetta in July, 2013, left 28 dead and over 60 injured.

What is happening to the Shia Muslims across Pakistan and especially in the occupied areas of Gilgit-Baltistan would take volumes to document. Suffice to say that there is no inhumane method of persecution that they are not being subjected to right from massacres and bombings of religious places/ religious congregations to economic deprivation, curbs on right and liberties etc. The Shias hold this special place in the religious persecution process probably because they are the largest community being targeted for extermination.

It is quite distressing to see a region that has for millenniums been the hub of civilizational and religious integration with an abiding heritage of multi ethnicity and linguistic/cultural diversity degenerate into a fanatical society in such a short span of time. It is astounding to see how some fanatical groups have converted rich diversity into a liability. Those who are responsible are not the visionary intellectuals and thinkers of the society; they are fringe elements out further their business and economic interests by playing politics of sectarian hatred.

The world needs to take cognizance of the genocide that is slowly taking place in Pakistan. The responsibility on India is all the more acute. While being concerned about all the groups that are suffering, special attention has to be given to the Hindu, Sikh and Christian communities and to the people of Gilgit-Baltistan who are actually citizens of India suffering under foreign rule.