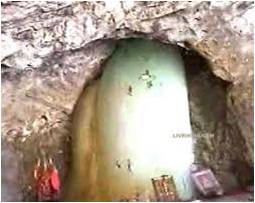 The State of J&K is steeped in history and culture and has its fair share of mythology and religious folklore, based predominantly on the principles of Kashmiriyat, social harmony, peaceful coexistence and homogenised society. The Dargah’s of Sufi saints are revered by Hindus and Muslims with equal fervour, so is the holy shrine of Amarnathji which is an important place of pilgrimage for Hindus from all over the world.

Jammu and Kashmir is once again geared up for the conduct of the annual Shri Amarnathji Yatra (pilgrimage). Fortunately, issues of the Yatra’s schedule have been amicably resolved and now all efforts are on to ensure its smooth and successful conduct. The first batch of pilgrims is expected to leave from the base camp at Bhagwati Nagar on June 29. The registration has already crossed well over two lakhs. In a significant decision, Shri Amarnath Shrine Board (SASB) has decided to facilitate registration of pilgrims at Jammu itself, which would help a lot of pilgrims who have failed to register themselves either online or with designated branches of Jammu and Kashmir Bank, Yes Bank and some Co-operative Banks. For this purpose, a registration counter has been opened at is being opened at Yatri Niwas, Canal Road, Jammu, where the pilgrims would be given on spot registration. However, the registration would be done in such a way that the daily quota of the pilgrims does not exceed 10,000 since only 5,000 pilgrims each from forward base camps of Nunwan and Baltal would be allowed to proceed to the shrine every day.

The holy cave of Amarnathji is located at the head of the Sind Valley in Kashmir, flanked on the north by the great Himalayan range and in the south by the Sasakat mountain range. It is located beside a small tributary of the Sind River called Amaravati. In the cave there is an Ice lingam that has been worshipped since early historic times. There are a number of legends on the origin of this holy place. It is believed that the lord Shiva narrated the Amar Katha to Godess Parvati in this cave.

Despite the turmoil of militancy in the State the importance of the Amarnathji Yatra has not diluted. Lakhs of pilgrims from all parts of the country visit the shrine every year with complete disregard to personal security. The number of aspirants for the pilgrimage has always been more what the Government can allow due to security reasons and time constraints.

The Muslim population has never heeded the diktats of terrorists to boycott the Yatra and, along with the Hindus, they participate in the pilgrimage with great fervour. They are unmoved in their faith and devotion to the shrine and are willing to risk the ire and reprisal of terrorists to maintain the same. Hotels, shops, pack ponies, porters and all other related services gear up to welcome the pilgrims. A festive air is visible in the area. The guides and porters of both communities are equally conversant with the legend and mythology and are more than willing to narrate the same to anybody ready to listen to them. Anybody requiring assistance finds hundreds of hands extended towards him, without knowing whether the hand belongs to a Hindu or a Muslim.

The security forces deployed in the area also participate in the pilgrimage with utmost enthusiasm and energy. Army units, in conjunction with other paramilitary forces/central police organisations and J&K Police, endure the adverse terrain and weather conditions to put up an exhaustive security umbrella for the pilgrimage. Their responsibility gains sensitivity since event is constantly under threat of a terrorist initiated action. To cater for security aspects, the Army normally deploys two forward tactical headquarters that control a Brigade plus strength, assisted by teams of Para Commandoes. IED and bomb disposal squads, a detachment of Army dogs, Army Aviation Helicopters and helipads are also catered for. This force works in conjunction with companies of the BSF, CRPF and personnel of J&K Police.

Apart from performing the security related duties of dominating the heights and ingress routes the Army also takes upon itself the responsibility to provide a number of facilities that help ease the vagaries of the pilgrimage. Army patrols along the route help in bringing in stragglers to the nearest camp every evening especially during bad weather conditions and assist in evacuation of casualties for which Army Aviation Helicopters are kept on standby duty. Medical and veterinary detachments man medical camps to cater for health related problems. Signal Companies are deployed to provide communication facilities, this facility assists in passing information on a regular basis and is utilised for emergencies like accidents and locating of missing personnel which is a common occurrence during the Yatra. The Army puts in place infrastructure for disaster management that includes Arctic tents and cold weather clothing, blankets etc.

The pilgrimage to Amarnathji is a source of pride and joy for every Kashmiri and its successful conduct is considered to be a personal achievement by one and all in J&K. Against this backdrop, it is most unfortunate that due to the machinations of some foreign sponsored vested interests as also some narrow political gains, a shrine that has been revered by both Hindus and Muslims for centuries, gets dragged into unseemly controversies which are short sighted and partisan in nature. Even more painful is the fact that the people fall into the trap and allow themselves to be sucked into a situation that they do not subscribe to. They risk their lives for the sake of their belief and yet they fall prey to the evil designs of vested interests. The Amarnathji shrine is a symbol of harmony and religious tolerance that epitomises the true spirit of Kashmiriyat. The annual pilgrimage is a reflection of this spirit. Whenever an attempt is made to sway the people away from this spirit they should draw inspiration from the shrine to raise a voice of moderation and patience.