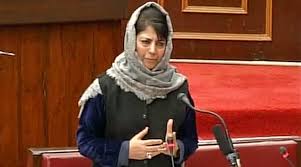 Politics in Jammu and Kashmir, messy at the best of times, are presently in a state of flux! Chief Minister Mehbooba Mufti is busy issuing inane and contradictory statements. She has sent out an appeal to India and Pakistan to stop exchange of fire along the line of control. In yet another statement she has implied that Kashmir stands alienated by India. Her contention is that means other than the gun are not being considered to deal with the law and order situation in the state.

When Mufti appeals to India and Pakistan she is, in effect, appealing to herself and Pakistan since she is running a coalition government with the party in power at the centre as a junior partner.

So far as the law and order situation is concerned she, as chief minister, is the chairman of the Unified Command in the state that decides on the strategy that the security forces would follow in tackling terrorism and law and order. It is she who has to decide the role of the security forces. If she has the confidence, she can reduce the presence of the Army and the paramilitary forces.

In her statements, Mehbooba should have urged Pakistan to stop its immoral assault across the border that is causing misery to the people on both sides. At the domestic level she should have appealed to the people of Kashmir, especially the youth, to come forward and assist the government in making this tourist season a resounding success. She should have generated the confidence that if the people take one step forward, she has the capacity to take ten steps.

The fact is that her government has not been able to come up with a single political initiative that would appeal to the people and pull them out of the clutches of those who are causing disruption and divisiveness.

Her statements have come across as those of a weak, unsure and frustrated leader. They lack the aura of statesmanship that is so important in a trouble torn region like Jammu and Kashmir

The chief minister has, in recent days, also flagged the negative role being played by the national media, particularly some English television News channels, in projecting a dismal picture about Kashmir that scares away tourists.

Her views in this regard are not entirely misplaced! It cannot be denied that, in their zest for ultra-nationalism and sensationalism, some Television news channels do play up the situation in Kashmir in the wrong light. But the question that arises here is – why is the state government, led by the chief minister, not engaging with the channels to put the situation in perspective? The Department of Public Relations in the state is moribund and outdated. It has not come up with any innovative, forward looking policy to engage media at the national level.

There is, therefore, a need for the chief minister to look within rather than further alienating the channels by publicly berating them.

Recently, a Bharatiya Janata Party (BJP) parliamentarian, Ashwani Kumar, raised a written query on the abrogation of Article 370, which was a part of the election manifesto of the BJP. Union Minister of State for Home, Hansraj Gangaram Ahir, while answering the query said, “There is currently no such proposal under consideration of the government.”

Mehbooba has sought to garner local political mileage out of this statement. Her otherwise dilapidated public relation machinery has adopted a hyper-active mode.  “The minister’s statement has vindicated our stand that the state government is serious about protection of state’s interests,” said a visibly elated Muhammad Rafi Mir, the chief spokesman of Mehbooba’s Peoples Democratic Party (PDP).

The development left the local BJP leadership that is supporting the move to abrogate the Article, red faced. It propelled the BJP General Secretary in the state Ashok Koul into giving a statement that the article would finally be abrogated and the statement by the minister in Parliament is for the time being only.

This development has laid bare the fissures in the coalition at a time when a show of unity is a political imperative.

While Mehbooba plays out her signature brand of politics, based more on emotional rhetoric and less on substance, the separatists are totally activated towards making things difficult for her and life hell for the common man in the approaching summer.

Syed Ali Geelani, Mirwaiz Umar Farooq and Yasin Malik came out of their winter hibernation to hold a meeting. What followed was a reiteration of run of the mill points like harassment, ill treatment of political prisoners, iron fisted policies of the state etc. The underlying indication is that these trouble makers are ready to indulge in their summer brand of disruption and divisiveness.

The trigger for disruption in the forthcoming season may well be the much hyped joining of terrorist ranks by Junaid Ashraf, son of the recently nominated Chairman of the Tehreek-e-Hurriyat, Mohammad Ashraf Sehrai. Junaid will meet, in the hands of the security forces, the end that is justified for a terrorist and an enemy of the nation, but before that he may be instrumental in creating acute law and order problems.

Mehbooba must realise that the political brinkmanship that she normally indulges in does little to build the aura of a strong coalition that has the capacity to negate the evil design of divisive and disruptive forces and usher peace and prosperity in the state.  While in power she cannot behave like a leader of the opposition. She must adopt a statesman like approach while accepting responsibility and accountability for her actions.

(Jaibans Singh is a reputed analyst and communicator)