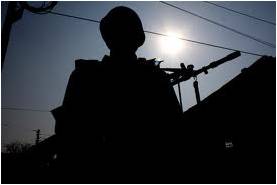 Two decades of terrorism and insurgency in the Kashmir Valley has brought in its wake a unique set of problems and issues. More than once, those who have been entrusted with the responsibility of countering this menace have found themselves in the dock with allegations of misconduct, misdemeanor and even outright killing of civilians. The most famous amongst such cases is what is commonly being termed as the “Pathribal encounter”. A joint operation was launched by 7 RR of the Army and the J&K Police on March, 25, 2000, at Panchalthan, Pathribal. The operation was launched on the basis of specific intelligence about the presence of the terrorists that was available with the JK Police. Five unidentified terrorists were killed and arms and ammunition recovered.

It was later alleged that those killed were not terrorists but civilians. Chief Judicial Magistrate, Anantnag, directed exhuming the bodies and DNA testing. On March, 06, 2002, about two years after the incident, media reports suggested that the DNA samples had been fudged.

The matter was, in due course of time, handed over to the CBI for investigation. The investigating agency has filed charges against army personnel. Presently the case is being heard by the Supreme Court of India before the Bench of Hon’ble Justice BS Chauhan and Justice Swatanter Kumar. In the course of the hearings, the Additional Solicitor General put forth an argument that the soldiers have protection under Section 7 of Armed Forces (J&K) Special Powers Act, 1990, whereby, once investigation is done, the matter has to be referred to the Central Government for sanction for prosecution. The Bench has suo motu impleaded the Union Home and Defence Secretaries and asked them to explain their position on whether sanction is a must. The Bench said: “The Union of India has a dual responsibility. It has to ensure that the innocent are acquitted and the guilty punished.” The case will come up for hearing on February, 24.

Even as the larger issue of protection provided to the soldiers who had taken part in the encounter under the Armed Forces Special Powers Act comes up for discussion in the Supreme Court, there are other facts pertaining to the investigation process followed by the CBI and some acts of the State government which deserve a closer look.

Official records of the case submitted to the CBI and the Supreme Court including situation reports, initiated by the Army immediately after the operation and much before the controversy broke out, as well as entries in Police records clearly show that the operation was carried out jointly by the Police and Army based on intelligence inputs provided by the Police. However, no police personnel has been named in the charge sheet framed by the CBI despite police documents clearly listing names of police personnel who took part in the operation. The five persons killed in the operation were identified as LeT terrorists by the police who claimed credit for the successful operation. Intercepts of terrorists communication obtained by intelligence agencies also suggested that the killed persons were terrorists who were involved in the killing of the 35 Sikhs in Chittisinghpora; this point has been completely ignored by the CBI.

Equally questionable is the negligence of the State Government in not ordering a judicial enquiry into the alleged misdeeds of the police and army immediately after the incident. The Inquiry headed by Justice Kuchay was tasked to investigate the circumstances leading to the alleged fudging of DNA samples of the killed persons and not the actions of the Police or the Army. In the matter of the DNA samples, in view of the mishandling of the entire exercise by the State government and the continuing doubts about the matching of the DNA samples with those claiming to be relatives of the deceased, there is a need to carry out fresh DNA examination before the case is progressed.

A major haul of weapons and ammunition was recovered from the five individuals killed in the joint operation. This has been taken over by the police in an official ‘Seizure Memo”. While supporting its allegation of the killed individuals being innocent civilians, the CBI also needs to come up with an explanation about the recovered warlike stores. This query has, of course, been posed upon the CBI by the apex Court.

The CBI has also stated that the Army units were under pressure to produce results in the aftermath of the killing of 35 Sikhs in Chittisinghpora. This statement is fatuous in nature; it was in fact the State government and the Police force who were under pressure to produce results, since law and order was their responsibility and the public outcry was directed towards them and not the Army.

The CBI allegation that the killing of five civilians by the army in a fake encounter was an extra judicial act ‘not in the line of duty’ contradicts all official records which clearly prove that incident took place in a joint operation by police and army carried out with the sanction of the hierarchy of both the establishments. Thus, the Army is not wrong in insisting that the CBI apply for sanction of the Government of India, as required under the AFSPA, for prosecution of its personnel involved in the said encounter.

The aforementioned circumstances point towards the possibility of a conspiracy. It seems that the CBI might be trying to prosecute the Army while keeping the police out of the investigation to shield some individual or party. It is hoped that the decision of the apex Court in the case will help resolve all doubts being raised in the case and its investigation and put at rest the controversy surrounding the case for good.