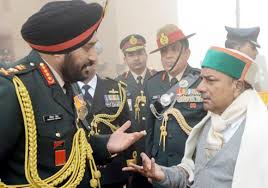 The Indian Army, on the directions of the Supreme Court of India, conducted an inquiry into the Pathribal encounter that took place in the year, 2002. It may be recalled that on May, 01, 2012, the Supreme Court ruled in the Pathribal case that the first option with regard to proceeding against the alleged accused persons rests with Army and if the Army does not take over the case for proceeding under the Army Act then the CBI should approach the central government for seeking sanction for their trial in a criminal court.

In accordance with the directions of the apex court of the land the Army put in motion the judicial process as laid down in the Army Act. The procedure under the Army Act stipulates that a competent authority will first convene proceedings to investigate the charges filed in the case. To facilitate this, the competent authority is required to constitute a board of officers to record a “Summary of Evidence” to establish that the charges hold merit enough for the accused to be tried by a court martial.

The Indian Army has followed the due process of law as laid down by the Army Act. A board of officers was convened to record the summary of evidence. All witnesses who were examined by the CBI in the said case and such other witnesses whom the board of officers or the accused persons desired to be examined were summoned to give their statements. In order to ensure that the proceedings are not influenced by the organisation where the incident took place, the responsibility was vested upon the Nagrota based 16 Corps.

Judicial systems the world over stipulate that witnesses have to appear before the court. In this case, however, the court had to go Awantipura in the Kashmir valley because the witnesses refused to come down to Nagrota citing financial and other constraints. Despite the road blocks the board of officers successfully completed its mandate and submitted the report of the summary of evidence. The report was then perused by General Officer Commanding, 16 Corps and General Officer Commanding-in-Chief, Northern Command.

The findings of the inquiry were declared by the competent authority of the Army on January, 23, 2014. The competent authority held the view that the evidence recorded could not establish prime facie charges against any of the accused persons. On the basis of these findings the army closed the case and forwarded the report to the Chief Judicial Magistrate, Srinagar.

The matter has been in the media limelight ever since. Many human rights organisations with dubious credentials are spreading rumours that the ends of justice have not been met by the judicial system of the country. Even the exalted apex court of the country is being accused of complicity in trying to shield personnel of the army who are alleged to have committed a crime. Much has been written on the subject, most of it with the intention of inflaming emotions and passions.

India is a vibrant democracy with established rule of law and legal procedures; to indulge in rumour mongering that negatively impacts the judicial system of the country; to adopt a cynical approach and give vent to totally unsubstantiated emotions is not proper. High ranking army officer’s would never shield a person against whom there is evidence of having committed a criminal offence. The nation should repose this much confidence in the character of its soldiers who are known to maintain the highest standards of propriety and discipline.

It is notable that recently this very Indian Army has convened court martial proceedings against its personnel in yet another encounter that took place in Machil. The outcome of the court martial is not known but what is established is that the Army is not ready to take human rights violations lying down and the organisation does not fight shy of getting defaulters to face the law. The Army fully understands that it has maximum to lose if it allows acts of criminality to go unpunished and would never allow such a thing to happen

The stance of the Army and Ministry of Defence all along has been that an Army-Police joint operation was conducted at Pathribal on the basis of specific information provided by JK Police. The army unit involved acted in good faith in the discharge of its duties. Now, the board of officers detailed to conduct the summary of evidence has substantiated the findings of the inquiry held after the incident.

The Army is also being blamed for stretching the case for 14 years. Over here it would be pertinent to note that it is the insistence of the CBI to proceed with the trial without the sanction of the government, due to reasons best known to the organisation, which led to the case being stretched over so many years. Once the case was handed over to the army it sought to fast track the proceedings and announced its decision regardless of the criticism that it knew would come its way. Delay is dispensation of justice is a bane that the entire country is afflicted with; many other cases have been going on for decades on end, the 1984 anti-Sikh riots being an example to effect. To blame the army for the slow process of justice is not correct.

The Army has sought closure of the case on the basis of lack of prima facie evidence to prove that the said operation was a fake encounter. However, to insinuate that legally the chapter stands closed is a falsity. The legal process of the country offers ample avenues to seek redress and undoubtedly they will be followed by those who feel that ends of justice have not been met.

Due process of law has been followed most assiduously in the Pathribal case. The army has conducted a fair, impartial inquiry and is open to legal procedures as laid down by the law of the land. It is best not to comment on a subject that continues to be Sub-judice.