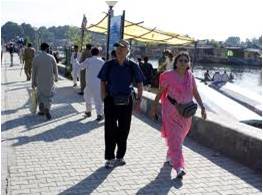 The Supreme Court has sought certain clarifications from the government that will assist in processing the Pathribal case to the next level. In the meantime, statements of the Court are being used by Kashmiri leaders selectively to meet political ends. The Chief Minsiter of Jammu and Kashmir, Omar Abdullah, has not wasted much time in using the Court directive to further his pet agenda of pushing for partial revocation of the Armed Forces Special Powers Act. “This again calls into question the entire debate of Armed Forces Special Powers Act (AFSPA) and the way in which it is implemented or the way it is used,” he said, adding, “one of the travesties of our justice system is that 12 years down the line we have not been able to deliver justice.”

Undoubtedly, most cases involving terrorism and such like activities lead to prolonged litigation in India. Take for instance the issue of hanging of Afsal Guru or the trial of Ajmal Kasab; both cases have been lingering with no end in sight. This being the accepted process of law should not be termed as a “travesty of justice”. There is, however, one travesty of justice that should be addressed by Omar’s government. The State government has yet to probe the Chittisinghpora massacre of March, 20, 2000 which was a prelude to the Pathribal encounter. The poor victims of this terrible tragedy are running from pillar to post to seek justice which is eluding them due to an insensitive approach of the J&K government.

The National Conference President and former Chief Minister Dr Farooq Abdullah, during whose tenure the incidents took place, has emphatically stated that the Pathribal incident was a “fake encounter”.”Yes, it was a fake encounter… All those who are responsible for having killed innocent people must be charge sheeted whether they are in the Army or they are civilians. You can’t kill innocent people and say that I have got a certificate of safety,” Dr Abdullah told reporters in Delhi. This statement has opened its own can of worms. If one would read JK Police instead of “civilian’ in Farooq’s statement then it would be closer to reality

It was the ineptitude of the Farooq government which led to the initial fudging of the DNA samples of those killed in the Pathribal encounter. Not much is known about the report of the second sample that was taken after a protracted public outcry. The Army had no means of influencing the fudging of DNA samples, therefore, it can be logically deduced that the attempt was made by such local lobbies who wanted to hide certain facts. Since the JK Police was a party to the Pathribal operation, it’s possible role in the fudging episode calls for closer scrutiny. The J&K government has not initiated any enquiry on the JK Police personnel, in fact, the officer who led the Police party in the encounter, Farooq Khan, is not only scot free but has also gained a number of promotions to become an Inspector General of Police.

Meanwhile, the Army is being prejudged and implicated in the case in a manner that defies logic and understanding. There exists irrefutable evidence about the joint nature of the said operation with the JK Police playing a dominant role. The operation was launched on the basis of specific information provided by the JK Police whose personnel pointed out to the Army the house in which terrorists were said to be hiding. The Army then launched the attack and in the process the alleged terrorists were killed. Post the encounter, the JK Police was quite forthcoming in taking the credit till such time that reports of civilians having been abducted and killed came up. It then hastily staged the proverbial disappearing act, leaving the Army to face the flak. Presently, the apex Court of the country is seized with the issue and yet it is being flogged to further the agenda against the AFSPA.

Of course, those responsible for criminal activities when terrorism was at its peak cannot be allowed to go scot free. However, the onus of providing justice is more on the State government than the Centre and the security forces. Pathribal is simply one incident amongst many which call for investigation. Also, playing politics which hurt the sentiments of the people who are trying to put the past behind them and move on would, by no means, assist the larger cause of the region. All actions have to be taken while keeping the sensitivity of the traumatized populace in mind.

Even as this controversy continues to rage, the security forces in J&K are fighting a grim battle not only against a determined and inimical foreign force but also with vagaries of nature. Six Army Jawans and a Border Security Force officer have been buried under an avalanche caused by freak weather near the line of control in Keran Sector of District Kupwara on January, 24. The hapless soldiers were out in the open because the Army does not discount infiltration attempts even during the worst of weather conditions.

Advisories about the relentless efforts being made by Pakistan to boost infiltration to resurrect the cult of terrorism in J&K are constantly given by the security forces and intelligence sources; the number of trained terrorists awaiting infiltration into India is being pegged at an astounding 2500. These inputs do not point towards a situation which is conducive for bringing down the guard; one Chittisinghpora type of incident can bring back the accrued gains to zero. Pathribal is a single unfortunate incident while security is a wide encompassing, sensitive matter for J&K; the two should not be linked in a manner that is counterproductive.