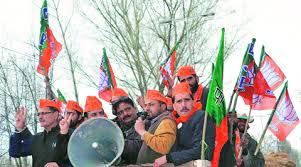 Politics and uncertainty go hand in hand! It does not take very long for a political situation to turn around on its head and throw up an unforeseen situation. Something of this sort is today happening in the politics of Jammu and Kashmir. Not too long ago, while talking of coalition equations, it was being said that the Congress will remain a constant while the second player in the coalition would be either the National Conference (NC) or the Peoples Democratic Party (PDP).

Now suddenly the dark horse (BJP) has turned out to be the main contender to form the government; those who used to laugh at “Mission 44” of the BJP (getting a majority in the J&K state assembly election) are now scurrying for cover. A wholly unprecedented political picture is emerging in the sensitive state with the BJP gaining centre stage.

Revival of the BJP took a significant leap forward in the aftermath of the Sri Amarnathji agitation of 2008, triggered by the rigid posture of the Hurriyat Conference and some mainstream Kashmir based political parties, on the issue of land allotment in the Kashmir valley to the Shri Amarnath Shrine Board. The Shri Amarnath Yatra Sangarsh Samiti that spearheaded the agitation had the complete support of the Sangh. In the state assembly elections that took place after the agitation, the BJP won eleven seats as against the single seat that it had won in the previous outing.

Ever since the “Sangh” has been working silently and tirelessly to build a support base for its nationalist ideology and development based model of governance; it has been assuring the people of its determination to remove the cancer of corruption that has eaten the very vitals of the state over decades on end. In its endeavours it has been helped, in no small measure, by the ineptness and corrupt practices of the ruling coalition.

There are a number of myths about Article 370, human rights violations by security forces under protection of the Armed Forces Special Powers Act (AFSPA) etc that have erroneously been central to the national understanding of the Kashmir issue. There are issues like the 1947 refugees still surviving without state recognition and colonisation of people in Gilgit-Baltistan and Pakistan Occupied Kashmir by the federal  government of Pakistan that are not being addressed in a serious manner.

Organisations like the Jammu and Kashmir Study Centre (JKSC) sponsored by the Sangh have been creating awareness in the national capital region of Delhi and outwards in the rest of India about the actual situation on ground. Now the whole nation is looking forward to the complete and irrevocable integration of Jammu and Kashmir within India. The divisive agenda of some vested interests, maintained over decades for personal benefit, stands exposed.

The icing on the cake has been provided by the “Modi wave.”BJP won the Jammu, Udhampur and the Ladakh parliamentary constituencies even as the ruling coalition stood decimated. This was motivation enough to launch Mission 44. The complete breakdown of government machinery during the recent floods in various parts of the state has discredited the ruling coalition. Sangh volunteers, on the other hand, have won many hearts with their spontaneous assistance to the victim in the valley. This will definitely impact the elections with advantage BJP.

The strong stand taken against the ceasefire violations has brought into the fold of the party the entire border and line of control belt of the state. The violations may not have ceased but, at least, the people suffering there feel that the BJP led central government is bothered about them.

The resurgence of the BJP is bringing into its fold a number of small political groups and organisations. The first to merge with the BJP was that of the Social Democratic Party led by Darakshan Andrabi. The party has a nationalist view point and a considerable presence in small pockets of the state both in Jammu as well as Kashmir region.

Peoples Conference, a Kashmir based party with separatist leanings has also evinced an interest in working with the BJP; its Chairman, Sajjad Lone, recently met with Prime Minister Narendra Modi and publicly praised him for his humility and vision for Kashmir, there is every likelihood of the Peoples Conference working along with the BJP post the forthcoming elections.

The patron of PDP, Mufti Mohammad Sayeed, has also publicly praised Prime Minister Modi and set in perspective his long standing relations with the BJP that go back to the time when Shri Atal Bihari Vajpayee was Prime Minister. PDP is expected to fare well in the forthcoming assembly elections and it will prefer to work with the BJP, if required.

Buoyed by the success achieved so far, the BJP is leaving no stone unturned in building its footprint in the valley. Top BJP functionaries are holding meetings with a cross-section of people including the intelligentsia, opinion makers, regional political parties, prominent citizens and the like to further strengthen the party base. Prime Minister Narendra Modi is scheduled to address as many as eight rallies across the state which will be a big morale booster.

The very mention of the BJP was anathema in the Kashmir valley just a little while ago, now there are many Kashmiri Muslims vying for a ticket from the party to fight elections from the Kashmir valley itself. That the party will nearly sweep the Jammu and the Ladakh region is already a foregone conclusion.

For long now the BJP has remained on the fringes of politics in the state. There is a palpable will and motivation in the public to bring about a change and the BJP is giving a viable option. Now it seems that the tables are poised to turn. That the BJP will play a dominant role in governance of the state is a given, the possibility of it achieving Mission 44 is quite high. Jammu and Kashmir is likely to witness a path-breaking political revolution in the forthcoming assembly elections.