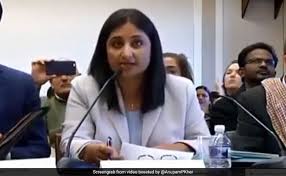 A remarkable narration by Sunanda Vashisht, on Pakistan sponsored barbarism in Kashmir in 1990 that led to the exodus of the Kashmiri Pundit community from their millennium old homeland, deserves the highest accolades. Vashisht is a Kashmiri columnist and political commentator and she rendered this significant commentary at a US Congressional Hearing (Tom Lantos Human Rights Commission) on November, 15, 2019. She was brutal, blunt, and logical in telling the absolute truth. “I am glad these hearings are happening here today because when my family and everyone like me lost our homes, our livelihood and our way of life, the world remained silent,” she said before narrating a few horrifying but true incidents of barbarity perpetuated upon her community by Pakistani terrorists who had infiltrated into Kashmir in large numbers and were assisted in their sadistic agenda by some Muslim locals who had a vested interest or had been won over with money power.

Sunanda spoke of a young woman who was gang raped and then cut into two halves while she was still alive; an engineer who was shot by terrorists through the rice container in which he was hiding and a woman who was forced to eat rice soaked in her husband’s blood. “I could go on and on,” she said.

Sunanda expressed delight at the scrapping of Article 370 an act which, according to her, would give citizens of the state the same rights and privileges as enjoyed by all Indian citizens.

Sunanda’s spirited address put paid to the arguments put forward at the Congressional hearing by some American Congressmen and Congresswomen, belonging to the American Democratic Party, who are known to be India baiters. They have invoked the Tom Lantos Human Rights Commission twice in three weeks to put pressure upon India, in the wake of the constitutionally valid decision to bifurcate the state of Jammu and Kashmir into two Union Territories and also tone down of certain provisions of Article 370 that were curtailing rights of the people.

Sadly, those who spoke against the Indian decision included Pramila Jayapal, an Indian-American Congresswoman and Arunima Bhargava, Commissioner from the US Commission on International Religious Freedom, also of Indian origin. That somebody with Indian origin would be so misinformed about the situation on ground in Kashmir is appalling. They spoke about curtailed movement and communication without showing any sensitivity to the all important aspect of security which made temporary imposition of such constraints imperative. They showed unconcern for the lives lost and sacrifices made by Indian security personnel, especially the brave soldiers of the Indian Army, to quell the barbarism unleashed on the common people by Pakistani terrorists for nearly three decades now, as narrated by Sunanda Vashisht.

The Congresswomen and other speakers against India also glossed over the fact that the temporary constraints have been removed for many weeks now and that the new status of the region has been accepted by the people.  Admittedly, there have been some small incidents of violence but these are insignificant in the face of the lager will demonstrated by the people with their peaceful acceptance.

A word about the Tom Lantos Human Rights Commission; Thomas Peter Lantos was an American politician who served as a Democratic member of the United States House of Representatives from California, from 1981 until his death in 2008. In 2011, the Tom Lantos Institute was set up in Budapest to promote tolerance and support minority issues in the world. This platform has been used extensively by the US Democrats to lobby Pakistani interests. The frequent meeting of the US Congressional hearings under aegis of this institution is a true example of the same.

The Congressional hearing was called on the premise that UN High Commissioner for Human Rights (OHCHR) has found little improvement in human rights violations in both India- and Pakistan-administered Kashmir. The hearing, as such, was required to reiterate the “urgent need to address past and ongoing human rights violations and to deliver justice for all people in Kashmir.”

In the meeting there was a lot of talk about the changed status and other restrictions in Kashmir. The fact is that while Jammu and Kashmir continues to remain calm and peaceful with the process of reorganisation moving ahead smoothly, there is great upheaval in Pakistan Occupied Jammu and Kashmir (POJK). October 22 is marked as “Black Day” by the people of the POJK. On this day, in 1947, the perfidious and brutal Razakars (mercenaries) from Pakistan invaded the princely state of Jammu and Kashmir with full support of the Pakistan Army. Earlier, a few dozen people used to come out to register a weak protest on this day. This year, the number of people on the street was in thousands.  The Pakistani police responded with unprecedented brutality and the outcome was the death of two innocent civilians, even as more than 80 sustained serious injuries. Nobody from the US Congressional hearing had anything to say about this blatant, state sponsored human rights violation in POJK.

It is quite evident that the Tom Lantos Human Rights Commission, said to be bi-partisan, has been consistently blaming Indian government for repressive rule, while ignoring real denial of basic rights in POJK.

One cannot but agree with Sunanda Vashisht when she demands assistance from the international community for India’s fight against Pakistan sponsored “radical Islamist terror” in the whole world and more so on Indian soil. The best way forward for Kashmir is to replace those who are encouraging toxicity for personal gains with those like Sunanda Vashisht who stand for all that is just and righteous.

On the diplomatic front, India need not be very worried by the venom being spread by a few politicians of the US. President Trump is convinced about India’s ability to handle the Kashmir issue internally. Once Uncle Sam has spoken, others become irrelevant.

It is hoped that, in future, American politicians will heed the unmatched democratic and secular credentials of India and not support the neighbouring country which is a known haven of Jihadi terrorism the world over.

(Jaibans Singh is a reputed geo-political analyst, columnist and author)