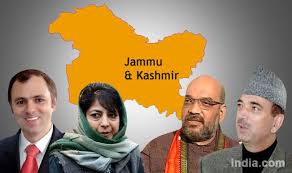 The one good take away from election campaigns is that the truth with the attendant skeletons starts tumbling out of the closet. In Kashmir, this happens at a much higher degree in view of the negativity on which the campaigns are based.

Engineer Rashid, patron of the Jammu and Kashmir Awami Ittehad Party and fighting the election from the Baramulla Constituency as the sole representative of his party, has said that the mainstream parties (National Conference and Peoples Democratic Party) are, “behaving like concubines of BJP and Congress and disgraced Kashmiris in every forum.”

Sajjad Lone, chairman of the Jammu and Kashmir Peoples Conference, has accused the National Conference (NC) of doublespeak, “The dynastic rulers are best separatists when out of power and worst cruel mainstreamers while in power,” he said.

The BJP has raised questions about the rationale of the NC and PDP in contesting the parliamentary elections after having boycotted the Panchayat and Local Urban Bodies polls. “It is because the LS polls will empower them and the ULB polls will empower the people. They are against the empowerment of people,” said BJP General Secretary Ram Madhav.

There have been instances of the selected candidates invoking allegiance to Pakistan as a part of their election rhetoric. In this context the BJP has declared its intention of registering an FIR against National Conference leader, Muhammad Akbar Lone, for allegedly raising pro-Pakistan slogans.

A summation of the statements by political leaders of various hues gives a clear indication of the fault lines that exist in the political spectrum of Kashmir. Small parties with limited popular reach are at each other’s throats. Each considers the other to be self serving and opportunist. In effect, this implies that all are self serving and opportunist. The only statement holding merit is the one made by Ram Madhav in questioning the rationale behind the mainstream local parties contesting the parliamentary elections after having boycotted the Panchayat elections. After all, nothing has changed on ground for the parties to have a change of heart. The people should definitely pose this question on the parties concerned during their election campaigns.

The main issues on which parliamentary elections are fought deal with creation of infrastructure and taking on big projects which bring up the standard of living of the people, especially so, in terms of  health, education and such like sustainable development aspects. None of these is coming out in the campaigning being done by the prospective candidates in Jammu and Kashmir, more so in the Kashmir Valley.  A derivative of the aforementioned narrative is that the political parties have nothing to show as achievement and for this reason they rely on mud-slinging at each other to gain the necessary visibility.

The people of Kashmir, especially the youth, are looking for affirmative action from their elected representatives to usher peace and prosperity in the region that has witnessed turmoil and violence for too long now. The youth are looking for integration to become a part of the success story of their nation. They wish to derive benefit from the nations march towards becoming one of the largest economies in the world with the biggest market share. The youth have the qualification as well as the will to take the plunge, what they require is the necessary push, for which the local Member of Parliament (MP) can play a big role.

It is in this direction that the entire narrative of the election campaign should be channelised and the best man should be selected for the job. The people need to compel their elected representatives towards seeking responsibility to bring about the necessary change. If they are allowed to carry on with the old rhetoric of raising passions through articulation of non-issues there can be not forward movement possible.

The second serious aspect of the election is the voting itself! If the people come out to vote in large numbers, a message of their trust and faith in democracy and freedom will go out to the entire world. It will also pave the way for the state assembly election which the Union Government and the Election Commission have already committed to hold within a month of the parliamentary election process getting completed.

There are security concerns raised due to the call given by certain terrorist and anti-national elements for boycott of the elections. People should lay their faith in the security forces who have, with great cost and sacrifice, created an environment where there is no need for the common man to be scared. Terrorism has for long been eradicated from all regions of the state except the Kashmir valley and there too it is at the lowest ebb. Security forces, especially the army have infiltration well in control and the situation is absolutely stable for a political process to be launched.  The centre has boosted the paramilitary strength to the required degree to give security to the electors from the house to the booth level.

Youth in the age of 18 to 35 years form a bulk of the voting population in the Kashmir Valley. These are educated boys and girls who know what is good for them. This is the best opportunity for them to take control of their own lives and ensure that their representatives are such who can give a shape to their aspirations and dreams.

The elections can usher the change that Kashmir is waiting for. The environment is also such that facilitates evolution of new ideas and concepts. The candidates who are most receptive to the changing environment should be chosen. Politics of hate and dissension should be replaced with positivity and forward looking thought. Coming out to vote is as important as selecting the best candidate. The elections bring with them hope and an opportunity that should not be lost.