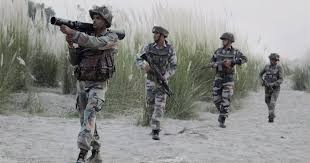 The nation celebrated “Parakram Parv” from 28 September to 30 September, to commemorate the bravery of its soldiers as demonstrated by the daring raids on terrorist camps set up by Pakistan in Pakistan Administered Kashmir (PaK) with the intention of infiltrating terrorists into the Indian state of Jammu and Kashmir. The raids, carried out on the night of 28-29, September, 2016, simultaneously on seven different locations were a true example of faultless planning and execution, not to mention the great courage and heroism shown by those entrusted with the responsibility.

On September 18, 2016, Pakistan trained militants attacked an Indian Army camp in Uri killing 18 soldiers. Six days later, while addressing a public rally in Kozhikode on the sidelines of the BJP National Council meet, Prime Minister Narendra Modi said “Militants should hear out clearly that India will never forget the Uri attack…. I want to tell the leadership of Pakistan that the sacrifice of our 18 Jawans will not go in vain.” This wasn’t an empty threat! 11 days later, commandos of Indian army’s elite Special Forces crossed the Line of Control (LoC) and hit multiple targets in PaK.

The targets of the surgical strike were terrorist launch pads near the LoC that were created jointly by the ISI and militant groups for accommodating militants prior to their infiltration into Kashmir. The surgical strikes took the Pakistan army by complete surprise. The Special Forces were able to destroy a large number of militant launch pads and inflict heavy casualties on the unsuspecting militants and Pakistan army soldiers present there. The crowning glory was that neither Pakistani soldiers nor militants could cause any harm to the commandos of the Special Forces who carried out the operation. Though Pakistan denied that any surgical strike had taken place, locals residing near the launch pads targeted confirmed that the Pakistan army and militants had used tractors and jeeps to hastily remove dead bodies and evacuate the injured.

In the aftermath of the surgical strikes the Pakistan army organised a special trip for media persons to some places near the LoC to convince them that everything was normal. Much to the eternal embarrassment of the Pakistan Army’s public relations establishment, it later became known that the media persons were intentionally taken to the wrong places just to mislead them into believing that nothing had happened! The truth of the strike was further revealed by videos made public which showed the strike in progress with the GPS coordinates indicating the precise locations of the targets that were clearly visible.

It is not easy for any government to take the decision of hitting militant sanctuaries on the other side of the international border or LoC as even a small slip-up can spell complete disaster and endanger the lives of the raiding force personnel as well cause immense embarrassment at the national and international level.  It goes to the credit of Prime Minister Modi that he approved a surgical strike against NSCN (K) militant camps on the Myanmar side of the international boundary in 2015 and followed it up by giving a ‘go ahead’ to another surgical strike inside PaK in 2016. This gave the Indian Army the opportunity to display its consummate professionalism and its Special Forces lived up to the nation’s expectations.

With two successful surgical strikes in as many years, every Indian was and continues to be rightly proud of the country’s armed forces and the morale of the men in uniform has skyrocketed.

The biggest take-away from the surgical strikes is that even after India admitted that its Special Forces had crossed the LoC and hit several  militants launch pads, no country criticised New Delhi’s punitive strike.  Compare this with the strong international condemnation of the 1999 LoC transgression in Kargil even after Pakistan claimed that it was not involved and the intruders were “Kashmiri fighters.” The best part was that since Pakistan consistently denies the existence of militant infrastructure on its soil, Islamabad couldn’t internationalise the surgical strikes as an aggressive action that needed to be strongly condemned. It could not even play its omnipresent nuclear threat card.

A defence analyst has aptly summed up Pakistan’s sorry predicament by saying, “For Islamabad it was a Catch 22 situation; acceptance of the surgical strike and playing the victim card could get it a little sympathy and possibly evoke some criticism of India’s action. But the moment it did so Islamabad would invite international criticism for having terror infrastructure on its soil. So, in order to diplomatically embarrass India, Pakistan needed to accept existence of terrorist launch pads on its soil; but the moment it did so it would become a sponsor of terrorism and would have to face diplomatic flak!”

There is undoubtedly much to celebrate for the nation in commemoration of so daring a military feat. A celebratory initiative, Parakram Parv (Celebration of Achievements) declared by the Union Government provided a good opportunity to the citizens of the country to honour their braves. The celebration was launched by Prime Minsiter Narendra Modi himself by inaugurating a weapons display and exhibition at Jodhpur Military Station close to the International Border with Pakistan. The Prime Minsiter coincided the inauguration with the Commanders Conference which was also held at Jodhpur and attended by The Defence Minsiter, three Service Chiefs and other senior government functionaries. Weapon displays and exhibitions were organised in other military stations across the country elicited a great response from the civilians. Functions were organised in schools, colleges and universities in which NCC cadets played  an active role. There were some voices of discontent heard from the opposition parties and certain other vested interests but then, such opportunism is a part of the politics of a democracy. The nation at large came forth with all its heart to acknowledge the bravery and dedication of the soldiers of the country that keeps the citizens safe from inimical designs of many enemies.

(Farooq Wani is a senior journalist and columnist)