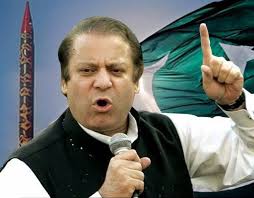 Prime Minister Narendra Modi greeted his Pakistan counterpart, Nawaz Sharif, for the holy month of Ramadan. This was yet another attempt to reach out to the neighbouring Nation by any means to break the impasse in the forward moment of normalising relations.

It was a statesmanlike gesture by the Indian Prime Minister in view of the fact that statements emanating from various quarters in Pakistan have been particularly belligerent and jingoistic of late. Pervez Musharraf, the former dictator of Pakistan, found it expedient to threaten a nuclear face-off against India. His comment that the nuclear arsenal of Pakistan is not there for a “celebrity occasion” is, by now, well known.

One would not take Musharraf seriously but for the fact that he is now chief lackey of the Army Chief, General Raheel Sharif. Musharraf sings the way Raheel Sharif wants him to sing because his survival depends on the latter’s goodwill. It therefore stands to reason that Musharraf was echoing the thought of the Pakistan Army Chief and in this context the statement gains malevolent proportions.

Before this Pakistan’s Interior Minister, Chaudhry Nisar Ali Khan, had also warned that, “Pakistan is not Myanmar.”He said this in the context of the highly successful operation that India has carried out against the North-East insurgents recently.

General Raheel Sharif has also been making more political and less military statements of late. His latest addresses in military forums have been liberally laced with the K-word.

“Kashmir is an unfinished agenda of partition. Pakistan and Kashmir are inseparable,” he said rather grandly during a recent address at the National Defence University of Pakistan. The General also expressed the need for resolution of the Kashmir dispute in accordance with the United Nations resolutions.

He followed this statement with another one at the Pakistan Naval Academy, “We are ready to pay any price to protect our nationhood and safeguard Pakistan’s interests, be it Kashmir, development of new ports or exploitation of natural resources,” he said.

Why is the Pakistani leadership suddenly adopting this posture of belligerence towards India? Since the Army Chief is himself leading the assault it can be surmised that all this is happening at the behest of the Army. Why does the Pakistan army, at this stage,  wish to get back to the traditional anti-India rhetoric leaving aside the position taken for many years that terrorism not India poses the biggest threat to the nation?

The reason is not hard to find!! The Pakistan army is presently at its weakest point ever. The disasters facing the army include the failed Operation Zarb-e-Azb in North Waziristan, uncontrolled insurgency in Balochistan and an adverse security situation in other parts of the country. This situation has showcased the fallibility of the Pakistan Army. It’s carefully nurtured persona of being the last bastion in the state of Pakistan is falling apart.

Traditionally the Pakistan Army diverts attention from its weaknesses by resorting to an unhealthy round of India bashing. It seems to be following the time tested approach yet again.

Notwithstanding the motive, the statements per se present a contradiction of sorts. If there are no terrorists training camps in Pakistan directed towards India, as the Government of Pakistan insists all the time, then why is Pakistan so hyped-up about a cross border strike by Indian soldiers? Surely they have something to hide which is leading to such a desperate reaction.

Regarding the issue of UN resolution on Kashmir, it is well known that India and Pakistan have, by virtue of the Shimla Agreement, agreed to address their issues bilaterally.  In any case, Pakistan has been the biggest violator of the provisions of the UN resolution on Kashmir by not vacating the occupied territories to facilitate a plebiscite. It has grossly violated the provisions of the resolution by revoking the State Subject Act applicable in the state, illegally exploiting the natural resources of the region, denying freedom and constitutional democracy to the people, ceding territories to foreign powers and changing the demographic pattern through settlement of Punjabis and Pathans in the region.

General Raheel Sharif in his enthusiasm to batter India failed to realise that by talking of an “unfinished agenda” he was in fact casting aspersions on his own organisation and his predecessors who grossly failed in “finishing the agenda” despite going to war several times.

The intentions of the army chief have become very clear; he is all set to up the ante in Kashmir to divert attention from the failure of his army in countering terrorism in his own country.

The developments also reinforce the perception that it is the Army in Pakistan that dictates the Kashmir agenda and not the political leadership or the government.  The tacit, behind the scenes control exercised by the army earlier has now been shed for a more open and proactive approach. It is also quite clear that in the country Prime Minister Nawaz Sharif has been reduced to a cosmetic appendage.

The Pakistan army knows that it cannot counter a proactive India breathing down its neck on its western border. The fear of a change in Indian policy towards the foreign sponsored terrorist activity in Kashmir is leading to a desperate reaction from the Pakistani leadership. A better idea for the country would be to cease its immoral activities all together.

It is highly likely that the Inter Services Intelligence has raised the Tehreek-e-Taliban Jammu and Kashmir and the Lashkar-e- Islam since it is disenchanted with the Hizbul MUjahideen that has not been producing desired results. With the snow melt and onset of summer, Pakistan is also set to increase infiltration attempts as has been seen by the recent activity along the line of control.

The bottom line for India is that the need to remain prepared for yet another Pakistan sponsored terror onslaught, especially so in the Kashmir valley, is now more than ever before.