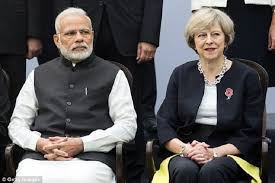 An international summit of world leaders is invariably seen by the Pakistan as an opportunity to highlight Kashmir as an unfinished agenda of partition. The Commonwealth Heads of Government Meeting (CHOGM) held in United Kingdom, was a very significant opportunity for the country to further its agenda and it went all out to push the same.

A “Hate Modi” campaign was unleashed in the United Kingdom. While the demonstrations dwelled on issues of sexual abuse and violence against Dalits/religious minorities, it was a so-called “foreign occupation” by India in Kashmir that held centre stage. A fringe organisation named South Asia Centre for Peace called for a protest at Parliament Square to highlight the plight of women in “Indian Occupied Kashmir.”

There was an undeniable signature of Pakistan in all the protests and demonstrations; of course, some Indian elements also would have been involved, but spearheading and financing was definitely from Pakistan.

By highlighting the “Kathua Incident” and involving the prime minister in the same at an international forum, an attempt was made to suggest communal polarisation in Jammu and Kashmir. It was one more blatant effort to further the agenda of divisiveness and disruption.

Closer home, a segment of the local media in Kashmir that has a very obvious leaning towards separatism, was used to push for discussion on Kashmir in CHOGM. This media carried a spate of articles which were passed off as “Opinion pieces.”

The articles spoke of the increasing violence along the line of control and within Kashmir to press upon the need to address the issue. They urged the Government of the United Kingdom to hear the voice of the “Strong Kashmir Diaspora” said to be agitating in the CHOGM venue. What was conveniently sidelined was that the so-called “Kashmir Diaspora” comprises only of stooges paid and nurtured by Pakistan.

A very animating news piece on the subject titled, “JKLF engages with Commonwealth nations on Kashmir issue,” was carried by the Kashmir News Service (KNS) on its website. After the grandiose headline what emerged was that JKLF had written an open letter to the heads of the commonwealth nations urging them to “constructively engage with India, Pakistan and Kashmiris for a durable and equitable resolution of the more than 70 year-long conflict over the status of Jammu Kashmir.”

But what standard of protocol can an open letter to which no reply has been published become an engagement with heads of state? Only KNS can explain this! A normal journalist, media man or an academic would look upon it as a desperate attempt to seek publicity.

It is important to highlight here that there is another Diaspora from Pakistan Occupied Kashmir and Gilgit-Baltistan which is active across the world (especially Europe) in demanding an end to the human rights violations being committed on the people of its homeland under aegis of the federal Government of Pakistan. The aspects being highlighted with evidence by this Diaspora are blatant exploitation of the natural resources of the land, colonisation and lack of self governance among others. The construction of the China Pakistan Economic Corridor (CPEC) through Gilgit-Baltistan, which is an area under dispute with India, adds a strong dimension for international engagement.

It is very sad to note that the Government of India has not been able to highlight the plight of these people, who are basically citizens of India under forcible occupation of Pakistan. It is a matter that should have been prominently flashed in CHOGM.

Kashmir did not elicit even a passing response in the deliberations of CHOGM! The position of world leaders on Kashmir is that the region is an integral part of India and is being subject to a foreign sponsored terrorism and violence by some vested interests. World leaders feel no need to elaborate upon the subject any more. To that extent the lack of response was on expected lines. For Pakistan, however, this complete wash out of its very expensive and well laid out propaganda campaign would have come as a rude shock.

Pakistan will now look for ways and means to offset the failure at CHOGM and loss of face thereof. The tried and tested method is to increase disruptive activity in Jammu and Kashmir. Since the Kathua incident was taken as the main theme it is likely to be played out proactively in the coming months. As the case progresses, one would not be surprised that it is used to trigger this summer’s round of stone pelting in Kashmir. In fact, build-up of a massive turbulence of the type seen in the 2008, Shri Amarnath Ji Shrine Board (SASB) agitation is also a possibility. Since this is agitation season the possibility becomes even more potent.

The rapes and murder of young Asifa Khatoon is undeniably an inhumane act whose perpetrators deserve nothing less than death penalty. Even more horrendous is the attempt to politicise the sad incident in a manner that would break away the society. Gujjars and Hindus have coexisted peacefully for millenniums.

While concentrating on the most important issue of punishing the perpetrators of the heinous crime, it is also necessary to not play into the hands of divisive and disruptive forces.

A second option available for Pakistan is to engineer a massive terrorist strike in Jammu and Kashmir. It would have the twin effect of lowering the morale of the security forces as well as giving a message to the commonwealth nations that they erred in not listening to its machinations. Pakistan likes to place Kashmir as a region impacting stability of the South Asian region and such terrorist strikes are a way to register its point of view. There is a need to enhance security and stay vigilant!

The success achieved by India at CHOGM can be cemented only if peace prevails in Jammu and Kashmir. It is in this direction that all efforts of the state and central government and peace loving people of the state should be directed. Maintaining communal harmony while keeping the security threshold on a tight leash would be the best strategy for the summer months.