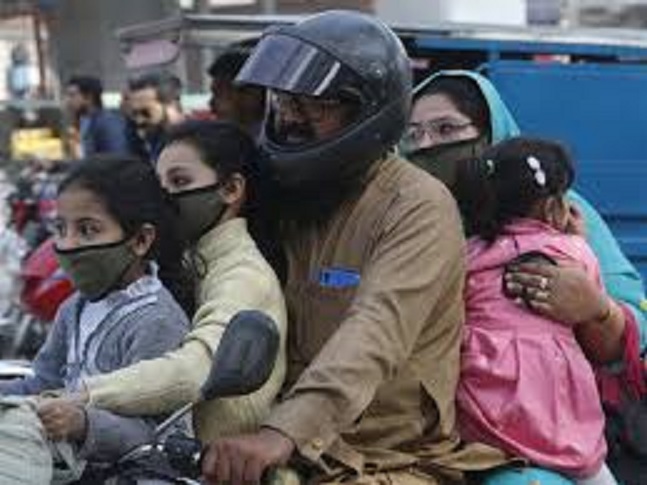 The Corona Virus is turning out to be a test of leadership in the global arena. The worst example of leadership is emerging from Pakistan. Prime Minister Imran Khan, never known for his administrative skills, has shown  unprecedented ineptness in dealing with the calamity

The biggest disaster for the country was allowing Pakistanis who had gone for pilgrimage to Iran to enter the country from the border city of Taftan in Balochistan without proper test and quarantine processes. The pilgrims were packed together in unhygienic tents without medical facilities. Officials of Sindh have identified these pilgrims as the main reason behind spread of virus in the Province. Undoubtedly, the impact on Balochistan would be disastrous, but then, no news ever comes out from the impoverished, suppressed and beleaguered Province, hence, there is no way of finding out.

In what can be termed as the most blatant form of supplication, Pakistan’s President  Arif Alvi, visited China when the virus was at its peak. the stated reason was to gain knowledge about dealing with the epidemic but actually the country wanted to please its benefactor with a show of solidarity. He brought back no substantial methodology to fight the calamity in his own country.

After creating this huge problem, Imran Khan has stayed in denial mode. He ruled against a total lockdown on the premise that a poor country like Pakistan cannot afford such a situation. “Pakistan’s [economic] situation is not the same as that of the United States or Europe. There is poverty in our country, with 25pc of the people living in extreme poverty,” he said while emphasising that a lock down would result in people dying of hunger.

He stuck to his stand even when Provinces like Sindh that had been enveloped by the epidemic begged for a strict lockdown. as a result large congregations carried on with impunity. The Tablighi Jamaat held a congregation of more than 100,000 people on March, 11, at Raiwind Markaz in the Allama Iqbal township of Lahore despite protests from the administration. Imran Khan also refused to discuss the situation with the opposition leaders; during the lone meeting of a specially notified committee of parliamentary leaders to discuss the corona crisis and shape shared responses, the prime minister was vague and distracted. He parroted his views and then left without listening to the leaders present; it was an exercise in futility.

It is no wonder that the Pakistan Army, in a quiet and sure footed manner took over the administrative reins of the nation. On 19, March,  Major General Babar Iftikhar,  the head of the ISPR ( Inter-Services Public Relations) went public on to announce that, “The Armed Forces had begun assisting civil authorities with hospital beds and building quarantine facilities.” This, in other words, meant that the army was in charge. Three days later, the Sindh chief minister imposed an absolute lockdown in the Province and formally requested army assistance to impose the same. Country wide lockdown was ordered on 22, March with Army personnel imposing the same with a heavy hand. The lock down continues to be in place.

While the Pakistan Army has been able to put in place a system to contain the situation, it has its own set of problems. There is a rapid spread of the virus among its own rank and file. Secondly, the army is unable to contain the fast deteriorating economic situation that Imran Khan had predicted with reasonable accuracy.

The Pakistan Army never allows any weakness within its system to become public. It has, therefore, established its quarantine and isolation centres away from the hub of its flagship Province, Punjab, The centres, therefore, have come up in the remote, underdeveloped areas of the country. Reports speak of Isolation and quarantine facilities in Pakistan Occupied Kashmir areas of Muzaffarabad, Domel, Bagh, Aliabad and Rawalkot and many areas of Gilgit-Baltistan. In Balochistan, the centres have come up in Pandharpur, Chhamb, Deva and Jhanda among others.

By so doing, the Pakistan army may have saved the primary areas of Pakistan Punjab and also moved its sensitive operations out of the media glare, but it has put at terrible risk the very poor, illiterate and impoverished people of the occupied territories and Balochistan. Once the infection spreads among them, which is inevitable, there will be no means to contain and control it. Hence, the Pakistan Army has opened the doors for a catastrophe of unimaginable proportions.

The poor daily wagers in Pakistan are at their wits end.  Not only are they struggling to ward off the disease but they also have to stave off hunger since the promised financial and material assistance is nowhere to be seen. The larger businesses in Pakistan like the manufacturers and exporters were functioning under a prolonged period of economic depression, this crisis has literally broken their backs and they are teetering on the verge of bankruptcy.

Doctors treating Corona Virus patients have, on a number of occasions, boycotted their duties due to failure of the Government to provide to them Personal Protective Equipment (PPE) and other facilities to take on this huge challenge.

Since the parliament of the country is in forced recess, fiscal re-prioritisation, revenue disbursements, social transfers to the immediately vulnerable are in suspension mode thus adding to the feeling of insecurity and despair. The Pakistan Army has temporarily bailed out the Imran Khan Government which, in any case is in dire straits. The specter of total collapse in the country, however, continues to loom large. The country does not have requisite testing kits and probably not enough money to procure them, hence, the actual situation is not known, a near total media blackout is making matters worse.

India, despite being one among the most populous countries in the world, has minimal and manageable impact of the virus. It is so because of a proactive and coordinated response by the government  and cooperative participation by the people. It would be in Pakistan’s interest to shed its dependence on China and look towards India for support.

(Mehtab Karan is an noted expert on Pakistan)