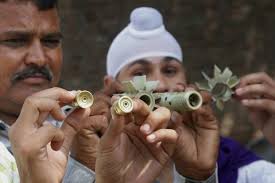 Pakistan is in dire need for some honest soul searching. The country should introspect on the reason behind its confrontational relationship with three of its neighbours – India, Afghanistan and Iran. It should revisit its failed policies of provoking neighbours and then offering lame justifications. Its diplomatic corps must cease to think that they are dealing with juveniles. The country should break out from the mindset of duplicity, deceit and belligerence that it has embarked upon.

In India, particularly, experts are that their wits end to understand the reason behind the extraordinary hostility by Pakistan in the form of incessant cross border firing and that too at a time when it is going through a very serious internal security crisis.

India was quick to condemn the horrific massacre of innocent school children and others in the terrorist attack on the Army School in Peshawar, Pakistan. The people of India, the leaders, the media, the civil society, led by the Prime Minister, extended heartfelt sympathy to the victims and families of those who lost their lives. This was a spontaneous reaction that came from the heart of the Nation.

Despite all this, there has been no respite in the firing by Pakistani troops along the international border and line of control (LOC). The pattern is quite discernible. Pakistan initiates the fire fight; when India retaliates in defence it makes a big noise. “We will now communicate with India in the language they understand,” are the chilling words used by Khawaja Asif, Defence Minister of Pakistan while speaking on the subject.

While the Pakistani leaders play out their grandiose games, the life of the poor people living on both sides of the border has become a virtual hell. Precious lives are being lost, property is being damaged and livestock killed. The border areas of both sides, in any case, are underdeveloped. On the Pakistani side there is no commercial activity at all, on the Indian side it is there but quite less due to security vulnerability. The mainstay of the villagers is agriculture; firing and turmoil causes damage to crops and to livestock, men cannot go out to tend to their fields, children cannot go to school, the old and the sick do not get adequate aid. These people are being pushed out of their houses into refugee camps for no fault of theirs. Life for them comes to a standstill.

Earlier ceasefire violations were done by Pakistan to facilitate infiltration. Even now this remains a reason but not the only one because so many violations and artillery firing inhibits rather than facilitates infiltration since the Indian troops get on high alert. Another reason is diversion of attention of the people from the country’s internal security issues.This too continues to be relevant but is not predominant since the internal problems have gone to a stage where nothing can divert attention from them.

On the face it seems that there is no conceivable political, military, religious, social benefit accruing to Pakistan from this firing, but a deeper study points towards a well laid out agenda.

Pakistan is quite worried about the manner in which the world is responding to the “Make in India” call of Prime Minister Narendra Modi; of particular concern to the country are the steps being taken to increase indigenous defence production with foreign collaboration. Pakistan would like to give the investors a feeling that India has security issues which make her an unstable destination for investment, especially for the capital intensive defence industry. Keeping the border heated up is a practical and cost effective means for achieving this objective.

The US is cooling off its strategic relationship with Pakistan as its forces withdraw from Afghanistan; as a result, Pakistan is getting desperate for military hardware. The only option left for Pakistan is to prove to the Islamic world that it’s very existence in under threat from India and thus get financial aid to build its military capacity. It also needs to show to the US that it has been left to India’s mercy for having supported the cause of the global war against terror in Afghanistan. Keeping hostility along the frontier alive provides the best means to achieve both ends.

The hung assembly verdict in the assembly elections of Jammu and Kashmir and emergence of Bharatiya Janata Party (BJP) as an indispensible political force is a huge setback for Pakistan’s Kashmir agenda. The country will do everything in its power to ensure that the BJP stays out of the government and the best way to do so is to scuttle the dialogue between the Peoples Democratic Party (PDP) and the BJP. With this incessant firing Pakistan has ensured that the Indian government finds it difficult to move on the issue of revocation of the Armed Forces Special Powers Act (AFSPA) as is being demanded by the PDP for construction of a coalition with the BJP. Once again a big political advantage is being accrued at a low cost.

One would not like to suggest that Indian steps down from the policy of overwhelming response to Pakistani hostility along the frontier as articulated by the Indian Government. What is important is to reinforce this response with appropriate political, diplomatic and media tools that expose the nefarious designs of the rogue state to the international community.