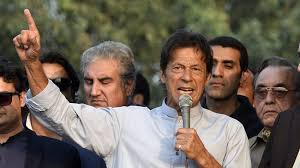 The change of constitutional status of the Indian state of Jammu and Kashmir carried out by a valid democratic process by the Indian Parliament has taken Pakistan by surprise. The time and space of this change is also not in favour of the country that is facing a debilitating financial crisis and simmering unrest in all Provinces.

That Pakistani response is lacking in structure and coherence. The Imran Khan led Government is swinging dangerously between diplomacy, threats and outright appeals to the people of Kashmir to raise in protest. In none of these efforts it has gained any viable traction.

Internationally the bid to initiate a discussion in the United Nations Security Council (UNSC) has not gone in the favour of Pakistan since four of the permanent member and nine of ten temporary members have termed the reorganisation of J&K as India’s internal matter.

The biggest diplomatic blow came when US President Donald Trump reversed his earlier statement of being ready to “mediate on Kashmir.” After his meeting with Indian Prime Minister Narendra Modi the sidelines of the G-7 meet Trump said, “We spoke last night about Kashmir, Prime Minister really feels he has it under control. They speak with Pakistan and I’m sure that they will be able to do something that will be very good.” He has literally put a lid on all talk of US intervention in the matter. Most other nations, including Islamic states considered to be close to Pakistan, have also adopted the posture of “Kashmir being an internal matter of India” and have quite openly suggested to Pakistan to lay off. Pakistan, thus, stands diplomatically isolated in the matter.

In response, Pakistan has adopted the time tested war mongering bogey to pressurise the international community into intervening in the issue. Right from his Independence Day speech on 14, August, Prime Minister Imran Khan has been giving threats of war in the most blatant manner. “The time has arrived to teach you (India) a lesson,” he said in his Independence Day speech.

That this policy has a wide ranging consensus from the all powerful Pakistan Army becomes apparent from a tweet by the Inter Services Public Relations (ISPR), “Reality of #Kashmir was neither changed by an illegal piece of paper in 1947 nor will any other do it now or in future. Pakistan has always stood by Kashmiris against India’s hegemonic ambitions, will always do. There can never be a compromise on #Kashmir,” tweeted ISPR. “We shall stand in the face of tyranny, regardless of the cost. Pakistan Army is fully alive to the sanctity of Jammu & Kashmir and will remain fully ready to perform its part in line with our national duty for Kashmir cause,” COAS on Independence & Kashmir Solidarity Day,” it stated in the second part of the tweet.

With blessings from the Pakistan Army in place, Pakistani ministers went all out with their war cries and bravado. One minister has set out October as the time when the war will begin. How they will fight in the Kashmir region in the extreme winter conditions is anybody’s guess.

Sadly for Imran, the world has paid no heed to his threats! In frustration he has started playing the nuclear card which has, for long, remained the “Brahmastra” (ultimate weapon of destruction) of the nation.  “If the world does nothing to stop the Indian assault on Kashmir and its people, there will be consequences for the whole world as two nuclear-armed states get ever closer to a direct military confrontation,” he is quoted to have stated to the New York Times on August, 30.

It is here that the sordid tale gets a new twist. While the prime minister is going whole hog with his nuclear threats the biggest hawk of the country, Foreign Minister Shah Mehmood Qureshi, has started smoking the peace pipe. In an interview to BBC Urdu on August, 31, he said, “War will bring destruction for people and the world. Therefore, war is no option.”

In the usual show of confidence he has spoken of talks with pre-conditions, ““There are three parties involved in the [Kashmir] dispute: Pakistan, India and Kashmir. I believe, if India is serious about it, it must release the Kashmiri leadership and allow me to meet them and do consultations. I will have to weigh their emotions as Pakistan cannot sit on the negotiation table by disrespecting their sentiments and crushing Kashmiris feelings.” He has stated rather grandly. Pray, when did India last speak about resumption of dialogue Mr. Qureshi?

India and the world, quite naturally, are totally confused with the hip-hop. Are we looking at a nuclear holocaust or at peace? Who to believe – the prime minster or the foreign minister? And what to make of the Army’s veiled threats?

A deep analysis of the posturing makes it very obvious that Pakistan wishes to push the Kashmiri people into open revolt. At the same time it does not wish to annoy the international community, so it is not supporting its threats with any tangible military action on ground. It is playing out an obnoxious Jekyll and Hyde act to raise passions of the Kashmiri people.

India has remained firm in its position all through – the reorganisation of J&K is an internal issue of the country in which Pakistan should not interfere. Secondly, talks will be held only when Pakistan controls absolutely and irrevocably the proliferation of terrorist activity from its soil to India, especially Kashmir. The people of Kashmir have not reacted violently to the change brought about as Pakistan has been and continues to hope for. They are, clearly, not taken in by its malicious propaganda.

Under the circumstances the best option for Pakistan is to back down. Instead of playing around the bush the country should reconcile to the reality on ground. It should stay away from Kashmir and concentrate in resolving its own financial and internal security issues. Its future as a nation depends upon doing so.

(Mehtab Karan is a US based Engineer and Geo-political commentator)