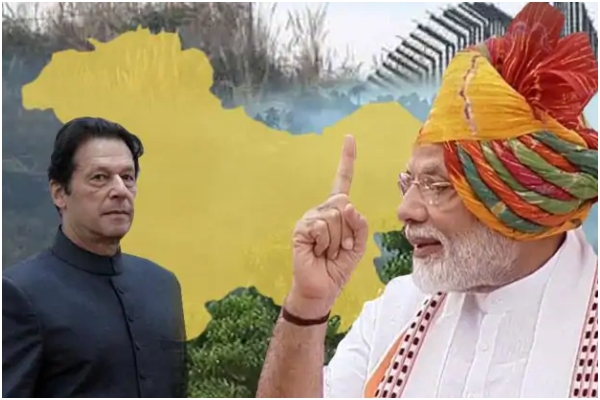 “When curfew is lifted there will be a blood bath,” said Pakistan’s Prime Minister Imran Khan, in the course of his address to the United Nations General Assembly (UNGA) in September 2019. He was predicting mass violence by the people of Kashmir as a protest against the decision to bifurcate the state into two Union Territories and abrogate Article 370 of the Indian Constitution. Imran Khan parroted this phrase and other hate filled rhetoric with monotonous regularity all though his stay in the United States and during visits to some Muslim countries. That Pakistan was poised to counter the progressive changes in J&K with belligerence became quite evident by Imran Khan’s posture in foreign shores.

The confidence with which Khan made these statements was the outcome of an assurance given to him by the Pakistan Army and the Inter services Intelligence (ISI) that they had the means and the capacity to create such mayhem in Kashmir. One year hence, Imran Khan has egg on his face since none of his predictions has come true. No disturbance has been witnessed  anywhere in the Union Territory of Jammu Kashmir, including Kashmir.

The reason behind this doomsday prediction not fructifying is the complete collapse of the formidable network that Pakistan had created in Kashmir for conduct of its nefarious activities.

Surprisingly, neither Imran Khan nor his advisors from the army and the ISI realised the actual sentiment prevailing in the region. They had no inkling  about the  hatred that the common man harboured against the very idea of separatism. The people identified it as a chief cause for their distress and were quite happy to see the so-called leaders interned as a consequence of the change. Efficient and corruption free governance under Governor and later Lieutenant Governor ensured fast track development and added to the satisfaction level of the people. They are now aspiring for a better life in a secure and free environment.

Separatists groups like the Hurriyat Conference and some so-called mainstream local political parties used to exert pressure on the people with coercive tactics based on pure muscle power. They are now fighting a losing battle to offset their political irrelevance.

Militarily, the security forces led by the Indian Army have been conducting incisive and relentless counter terrorist operations under the very successful “Operation All Out.” The Pakistan Army and terrorist organisations have been trying their level best to counter the Indian blitzkrieg  and keep the momentum going; they have enhanced infiltration bids and attempted to give a boost to local recruitment.  Nothing is working out for them.

The Over Ground Workers (OGW) network in support of the terrorists was created, by and large, through threats and coercion; locals were warned of  dire consequences to complete families if they did not assist as required and ordered. With terrorist strength waning, people are no longer responding to these threats, hence, the OGW network is now non-existent.

Presently, the terrorist cadre is without credible leadership and local support and is being decimated in a sustained manner. Despite Pakistan’s expectedly determined attempts to kept the flame of terrorism alive the graph has turned down irretrievably and soon the region will be totally free of the menace of terrorism.

Another very significant change is the complete lockdown on flow of illegal funds. Hurriyat centric organisations and leaders are on the back foot due to investigation of the National Intelligence Agency (NIA) and unable to receive funds through Hawala transactions. Fake currency suffered a big setback due to demonetisation and has not been able to gain a foothold. Enhanced border vigilance has greatly reduced the drug trade. As a result, disruptive activities like stone pelting and targeting of security forces and divisive activities like forcing Bandhs (Lock outs ) and Hartals (Strikes) are no longer happening.  Even terrorists are left rudderless due to lack of funds, arms and ammunition.

The religious element prospered due to the radicalisation process through Mosques and Madrasas (seminaries) supported and run by forces determined to replace the Sufi culture of the region with the more stringent Salafi-Wahabi model. With flow of money being restricted the Mosques and Madrasas are facing an existential crisis. Sufi culture, on the other hand, is once again evolving in the free environment. Sufi practices are back with many functions and gatherings having been held before the COVID-19 situation put a stop to such activities. They are however being carried out through webinars, distribution of literature and social media interaction.

Thus, the formidable network created by Pakistan, that had a political, military, religious and economic dimension, is now in shambles.  The situation has led to Prime Minister Imran Khan changing the theme of his anti-India rhetoric. In February, 2020 he said in Mirpur, Pakistan Occupied Kashmir, that his country’s battle-hardened army will teach India a “hard lesson” in case of “any misadventure” by New Delhi. This is clearly a defensive statement and a far cry from the belligerent and aggressive approach he had adopted in mid-2019 in UNGA. He has, in recent times, been resorting to low level statements like “deliberate and violent targeting of Muslims” by India. This only indicates his growing frustration because of his abject failure.

Pakistan’s obduracy in continuing with its unholy agenda despite the futility of the same becoming quite apparent is astounding. The terror machinery operating from Pakistan has reactivated itself in a big way. The fallout has been concerted ceasefire violations mainly with the objective of facilitating infiltration. Terrorist activity in the hinterland of the Union Territory is also being orchestrated in accordance with well laid out plans. It is so because the Government of Pakistan stands immobilised due to a stranglehold of the army and the ISI. A politician would understand that the game is over in Kashmir but not the Army whose survival depends on keeping the Kashmir agenda alive at all costs. This continues to be the biggest misfortune of the beleaguered country.

(Dr. Simrit Kahlon is an academician and geo-strategic analyst)