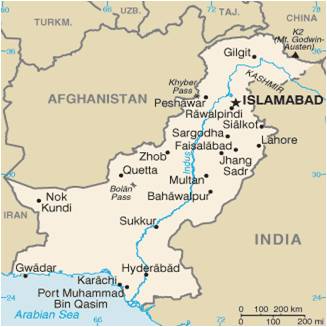 Pakistan’s military thinking has perennially focused on the creation of strategic depth against India. Always wary of India’s military might, Pakistan looks towards Afghanistan and the Central Asian Republics (CAR) as land masses that can meet its most significant strategic requirement. This has been the primary reason for its assisting Afghanistan during the Russian invasion and establishing a cordial relation with the Taliban regime, which was otherwise a pariah for the world community. Even now, Pakistan is maneuvering to position itself as the sole military arbitrator for Afghanistan post the imminent withdrawal of the NATO forces for the same reason. More importantly, it does not want to see India playing a significant role in the strategic affairs of Afghanistan.

The doctrine of strategic depth was fine tuned during the dictatorship of Zia-ul-Haq. His penchant for using militants, terrorists and other non-state actors for political effect was used liberally in giving shape to this doctrine. The fact that the Taliban emerged victorious in the post Russian regime gave yet another boost to the policy conceived by Zia-ul-Haq. The government of Pakistan, under Prime Minister Nawaz Sharif, extended recognition to the Taliban regime in Afghanistan on May 25, 1997, almost immediately after the government was established. The Taliban government of Afghanistan responded by giving all possible consideration to Pakistan’s security concerns. Thus during the period of 1990’s, Pakistan made very effective use of militants, terrorists and the Taliban to wage a proxy/asymmetric war against India especially so in Kashmir. This was also the golden period in application of its policy of strategic depth.

All this was done without giving a thought to the long term effect that it would have on Pakistan’s society, culture, and survival as a nation state. Apparently, short-term gains outweighed long-term considerations in the calculations of Pakistani decision-makers. That this policy was inherently flawed was pointed out by a number of eminent security analysts and experts both within and outside Pakistan. However, the idea of strategic depth was so deeply embedded in the Pakistani psyche that such sane advice could not motivate the leadership to consider its modification let alone a total withdrawal. Even the change in environment post the 9/11 attack on the World Trade Centre in the US and the resultant Global War on Terror (GWOT) of which Pakistan became an active partner, did not bring about a paradigm shift in the basic policy of the country.

While the Pakistan Army, under the leadership of a military dictator, involved itself in GWOT both logistically and operationally the relationship with non state actors was kept alive on the side through the infamous ISI. The result was total ambivalence in the definition of friend and foe with the roles being switched with comparative ease. This led to the evolution of lopsided policies like compartmentalising of militants into good and bad Taliban, striking a number of deals and counters deals, creation and break up of alliances, attacks and standoffs etc. Some militants were sheltered, others were set up for drone attacks or handed over to the US – this double game has been on ever since GWOT was launched. It was the common man of the war torn North West Frontier Province who came out as the worst sufferer from this warped policy.

Instability breeds anarchy and this became a bane for Pakistan on its western frontier. Fundamentalist ideology started gaining ascendency and religious zealots started weaning away youth from the mainstream. Full use of media and communication means was made by the fundamentalists to achieve this objective. Radios, websites, newspapers, periodicals, pamphlets, posters and banners besides the most potent electronic media were used to the hilt to spread the word. This phenomenon assisted the Islamist fundamentalists in creating a very formidable and dominant constituency amongst the people.

While the Pakistani Army, the government and the ISI continued with their policy of denial and two timing, the militants started closing ranks and establishing their writ. Such activity invariably attracts funding and wherewithal which started flowing in to convert the groups into miniature armies and the leaders into war lords. Alliances both strategic and ideological were made between the various groups to establish the religious authority of Jihad. The networked organisations set about planning attacks not only in the tribal areas of Pakistan and Afghanistan but also in India. Who can forget the visage of Baitullah Mehsud or Maulana Fazlullah also known as Mullah Radio amongst a host of others, who can forget the 26/11 terrorist attack in Mumbai which continues to haunt Indo-Pakistan relations?

A situation has now come about where Pakistan, due to its fallacious policies has started facing isolation in the world community. Its leadership has lost the distinction between friend and foe, good or bad and is hurtling down a tunnel of despondency. The monster created by the Pakistani State is now ready to devour its masters and threat is now permeating from the source that was created to counter the same. The policy put in place to create strategic depth has turned out to be a strategic blunder.

There is a way out, Pakistan has to get over its fear of being overwhelmed by India’s might and clout as a regional power and convert its potential into a source of strength. It is time for Pakistan to look at India to provide to it strategic depth against its western neighbours rather than the other way round. This would require a paradigm shift in the existing which, unfortunately, is easier said than done. It is difficult to shed inhibitions and insecurities that have been nurtured for decades, but there seems to be no other way by which Pakistan can get out of the mess that it has landed itself into.